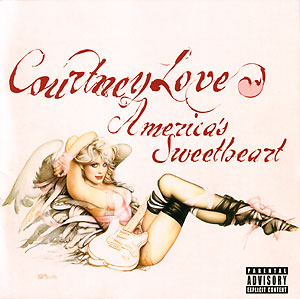 "America's Sweetheart" is the 2004 solo debut from . The release of this album was delayed for three years and preceded by much negative publicity over Courtney's legal problems and drug issues.

America's Sweetheart featured Courtney working with hitmaker (, , ) and , famous for his collaborations with veteran rocker .

Though some critics gave the album positive reviews, it was a commercial flop, selling about 130,000 copies in the U.S. and 250,000 worldwide. The first single taken from the album, "", was released in February of 2004. The song experienced some airplay in the U.S., but achieved higher chart positions in other countries, such as the U.K. "Hold on to Me" was a minor hit in several countries. Also, some countries played other songs from the album that were not released as official singles such as "All the Drugs"; however, these songs were quite well-received.

Non-U.S. versions of the album feature, uncredited, and on a different recording of "Sunset Strip" (with slightly altered lyrics), singing and playing guitar. Dalle claims she is also a co-writer of the song. In the U.S., both an explicit and an edited version was released.

The original recordings were made at a in the South of and then shopped around to four different labels. It seemed Love was likely to sign with UK label , but instead signed to , who offered her a $20 million record deal. However, upon purchasing the album, Virgin demanded that the album be re-recorded so it would make their fiscal-year deadline of March 31. Courtney, who was at rehab at the time, was brought back and forth from the health center by the record company, did not improve her addiction battle and became overwhelmed by the compulsory work. [ [http://www.foxnews.com/story/0,2933,120430,00.html Courtney Love: Did Virgin Records Use Her?] ] Besides it all, Love later revealed to "" that she "never saw a penny" from the advance that Virgin paid her for "America's Sweetheart".

Also, between the several controversies involving "America's Sweetheart" release, Courtney accused Virgin Records of putting the work out before it was finished. According to her, the record company chose the songs, the cover, the recorded vocals and the final arrangements without her participation: "...I made five good songs. I had twelve songs, but they're not on the album. I had no creative control." [ [http://www.rollingstone.com/artists/courtneylove/articles/story/5940046/queen_of_the_damned Rolling Stone, 2004: Queen Of The Damned] ] And to make it worse, according to BMI and 's websites, four of the songs on the album ("But Julian I'm a Little Bit Older Than You", "Almost Golden" and both singles, "Mono" and "") weren't officially registered for copyright collect. By late 2006, the legal status of all of them seemed to have been corrected.

Love demonstrated her extreme regret about the record in a interview, in which she declared that "the sound on A.S. sucked beyond words. The production was a nightmare. Linda and I had written some really good songs, but they were rendered lazily and sound like shit. The art was horrific and not my idea and the label didn't back it at all. I was busy taking drugs to dull the pain of having lost everything AND made a shit album to boot (...) The producer didn't know what he was doing and he just spent my money. It almost had a moment of being "" - almost - but that's like almost winning a race. You either do or you do not. And in this case it's a delightfully written record in parts and sonically untenable with two of the most pretentious songs I have ever written. I was so druggy I thought it'd be cute to rip off "Teen Spirit" on "I'll Do Anything". Believe it or not, "All the Drugs", "Sunset Strip", "Mono" and "But Julian..." are all good songs. They just were produced crap and the songs weren't taken further than demo status. {...} The art still makes me seethe. At least make it look cool, and instead there's me as a playboy pinup. I love Olivia's art but that was personal for me - not art for a record."

However, her outlook on this album was not always this negative, as in 2004 when Courtney stated, " [America's Sweetheart is] good. It took forever, so it better be good." [ [http://web.archive.org/web/20051106151914/www.moonwashedrose.com/media/interview04.html Interview: Courtney Love] ]