The Chernihiv musical instruments factory was a factory founded in 1933 making stringed instruments. It is named in honour of Pavel Postyshev.

The Chernihiv musical instruments factory was opened in 1933. Initially it made pianos, balalaikas, mandolins, guitars and domras. There is evidence that 5 banduras were made there before the war by Mykhailo Yerchenko in the late 1930s. These instruments were probably diatonic Kharkiv style banduras. In time more instruments were made at the factory by Mykola Martynchuk.

In 1950 the factory began to manufacture banduras, initially using the construction plans of Chernihiv bandura maker - Olexander Kornievsky. This series of instruments were made until 1954 by maker Ivan Hladlin, who worked with makers Oleksander Shulaikovsky, Mykola Martynchuk and Oleksiy Kilochytsky. 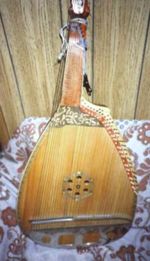 Up until that time a special workshop for the manufacture of banduras existed in Kiev. This workshop was initially set up by Hryhory Paliyivetz and after his arrest was directed by Tuzychenko. After the war it was directed by Ivan Skliar and primarily made instruments for the Kiev Bandurist Capella and associated bandurist ensembles. Because the makers were experienced bandura makers and the conditions in Chernihiv at the factory were much better for the drying, storage of materials it was decided that all of these craftsmen would move to Chernihiv. A special workshop was established at the factory for these craftsmen. In 1955 the first concert banduras with mechanism were made. Initially some 10 concert banduras were made a year, and special written permission was required from the Ministry of Culture in order to obtain such a bandura.

Although Skliar made the greatest contribution to developing the Kiev style bandura made at the Chernihiv factory instrument, other craftsmen left their impact as well. The method of placing a colored decoration around the side of the bandura was developed by Oleksy Kilotsky. The unique one sided head was suggested in the early 1960s by bandurist Andry Omelchenko. The Taras Shevchenko bas-relief was designed by D. Vasiliev. 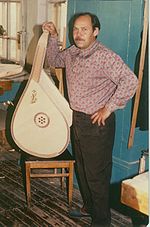 In order to gain access to hard currency funds the factory began to manufacture instruments for export. In the late 1960s the first orders for banduras arrived from North America. This became a very positive factor in the development of the bandura.

The Kiev experimental workshop which moved to Chernihiv also made orchestral banduras. They also made chromatic tsymbaly also designed by Ivan Skliar with the help of Oleksander Nezovybat'ko. The craftsmen in the workshop making the concert instruments were allowed to sign their names to the instruments: Oleksander Shulkovsky, Oleksy KIlotsky, Iosif Mentej, Volodymir Mentej, Mykola Yeshchenko, Sofia Zolotar. The head of the experimental workshop was Oleksander Shlionchyk.

In 1967 the factory began work on manufacturing Skliar's latest creation - the Kiev-Kharkiv bandura. All together they made 8 instruments without mechanism. Unfortunately, due to the untimely death of Ivan Skliar in 1970, the manufacturing process for the instrument was not perfected and the Kiev-Kharkiv bandura was dropped from further production. 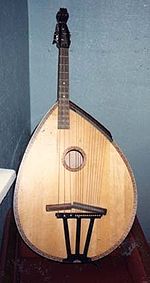 The use of willow in bandura backs and bodies has cause great problems for the factory as this is not a commercial wood. Keeping in mind that it takes a willow 20-30 years to grow to the size that it can be used, a substitute had to be found. In the 1970s the factory began making instruments whose backs were made of poplar. This however meant that the instruments did not have as nice a tone as the previously made instrument. The backs of these instruments were somewhat heavier because poplar had a tendency to easily split. Only the concert banduras continued to use willow for instrument backs when it was available.

In time the experimental workshop manufactured 200 concert banduras a year. Each maker made 1.5-2 instruments a month. These instruments were better finished and were made of better quality material. In the 1980s there were 10-12 makers. Today there is only one master craftsmane - Petrenko.

In the period of economic restructuring the factory has shrunk from 1600 workers to 68. It no longer manufactures musical instruments but has rearranged its affairs to manufacture coffins for an Italian firm. The production of pianos is also under question. Some authorities feel that Ukraine does not need a piano manufacturing facility. In 2008 it had become an automobile servicing centre.

The manufacturing of banduras has ground to a standstill. Apparently there are still 2 makers in Chernihiv who still make banduras in their own homes and charge $850 US (1999) per instrument.

More disturbing is that all the banduras in the museum collection at the factory have been stolen. Some of the instruments were truly unique. Some have surfaced for sale at an asking price of $6000.

The following are the most common banduras made by the Chernihiv factory with their 1988 price in roubles in order to compare the instruments.