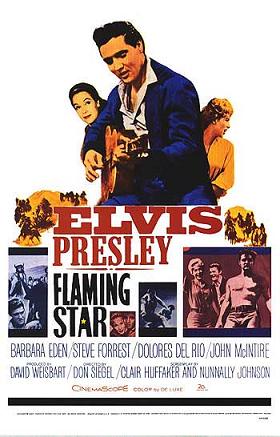 
"Flaming Star" is a 1960 western film starring , based on the book "Flaming Lance" () by . A dramatic role, it is said that gave one of his best acting performances as the "Pacer Burton." The film's working title was "Black Star". It was directed by .

plays Pacer Burton, the son of a mother and a rancher father. Along with his half-brother, Clint, the four of them live a typical life on the Texas frontier. Life soon becomes anything but typical when a nearby tribe of Kiowa begin raiding neighboring homesteads. Pacer soon finds himself caught between the two worlds, part of both but belonging to neither.

The was not released as an as the film contains only two songs; only "Flaming Star" was released on an EP entitled "Elvis By Request - Flaming Star" to coincide with the film's release. Two other songs, "Britches" and "Summer Kisses, Winter Tears", were originally scheduled to be part of the movie but in the end were not included. "Summer Kisses" was released on the "Elvis by Request" EP and would later appear on the compilation album "Elvis for Everyone" five years later. "Britches" and "Cane and a High Starched Collar" (the second song to actually be included in the film) would not be released until after Presley's death as part of ' "A Legendary Performer" series. An early version of "Flaming Star", using the film's working title, "Black Star", was also recorded and not released until the 1990s.

"Flaming Star" was the first Presley film not to have a full soundtrack release in either LP or EP form (although the "Elvis by Request" release come close). This would happen again in 1961 with "", and become standard procedure for Presley's later films, beginning with "".

* This was Elvis' first non-musical film role. It did not perform as well at the box office as his musicals, leading to decree that Presley would perform only in musicals from here on. Elvis wouldn't release another non-musical film until 1969's "" -- another western.
* The role of Pacer was originally written for , whilst was suggested for the role of the elder brother.
* The original female lead was English actress who was replaced with during filming
* This movie's publicity still of Elvis was used by to create several silkscreens: "Double Elvis", "Triple Elvis", and "Elvis 11 Times".