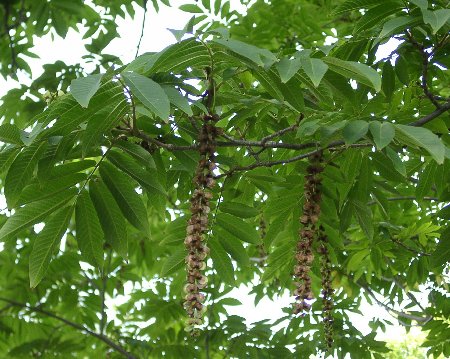 The s are monoecious, in s. The seed catkins when mature (about 6 months after pollination) are pendulous, 15-45 cm long, with 20-80 seeds strung along them.

Another species from China, the Wheel Wingnut with similar foliage but an unusual circular wing right round the nut (instead of two wings at the sides), previously listed as "Pterocarya paliurus", has now been transferred to a new genus, as "".

Wingnuts are very attractive, large and fast-growing trees, occasionally planted in s and large s. The commonest in general cultivation outside of Asia is "P. fraxinifolia", but the most attractive is probably "P. rhoifolia". The hybrid "P. x rehderiana", a cross between "P. fraxinifolia" and "P. stenoptera", is even faster-growing and has occasionally been planted for production. The is of good quality, similar to , though not quite so dense and strong.