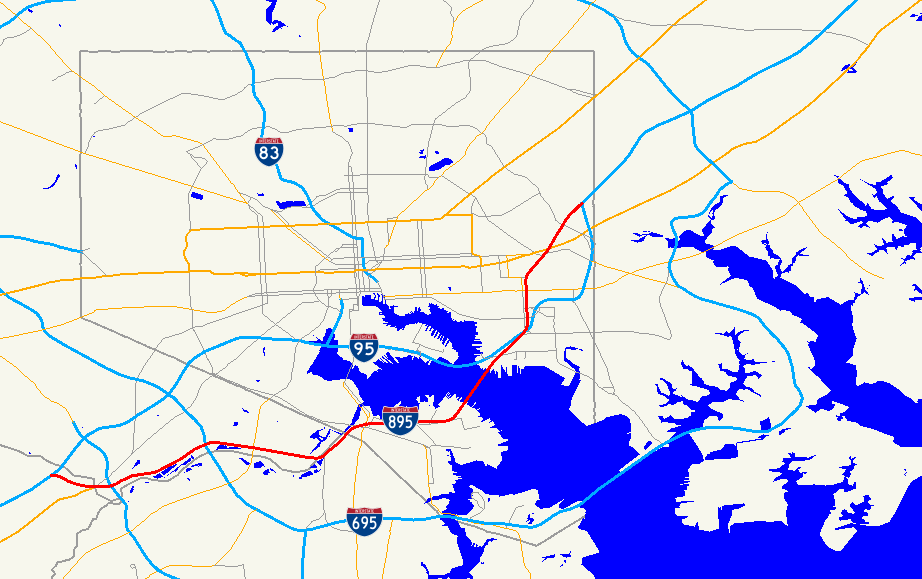 Starting at Interstate 95 at Exit 46, it bypasses downtown Baltimore to the southeast via the under the .

Traffic passing through the tunnel is charged a toll - $2 for automobiles. Due to the design of the interchanges, traffic using any part of the road south of the tunnel must pass through the . This was also true north of the toll plaza - except for the short stretch north of Moravia Road - but ramps were built ca. 2000 to provide full access to Bayview Hospital at Lombard Street. The road was designed this way to ensure that it would not be congested by local traffic. On the other hand, the eight-lane Interstate 95 through the , which was opened in 1985 to relieve increasing congestion on I-895, [ [http://www.roadstothefuture.com/Balt_Harbor_Cross.html Roads to the Future - Baltimore Harbor Crossings] ] has full local access.

The route terminates on Interstate 95 at unsigned Exit 62. A three-pronged spur - - splits from I-895 south of the tunnel, and provides access to and Interstate 97.

Only the part of I-895 north of the bridge over (and interchange with) Interstate 695 south of Baltimore is considered part of the by the . [PDFlink| [http://www.sha.state.md.us/KeepingCurrent/performTrafficStudies/dataAndStats/hwyLocationRef/2004_hlr_all/co03.pdf Highway Location Reference, Baltimore County] |5.64 MB, , ] [PDFlink| [http://www.fhwa.dot.gov/hep10/NHS/maps/md/baltimore_md.pdf National Highway System: Baltimore MD] |185 KB] The entire route is, however, signed as an Interstate.

Most of the road - from U.S. Route 1 (exit 1) to U.S. Route 40 (exit 13) - opened , , allowing traffic to bypass congestion in downtown Baltimore. [, PDFlink| [http://www.mdta.state.md.us/mdta/Documents/harbor.pdf The Baltimore Harbor Tunnel] |168 KB] With the opening of the tunnel, travel time through Baltimore was decreased from one hour to 12 minutes, as motorists could now avoid nearly 50 traffic lights on US 1 and US 40; the subsequent reduction in downtown traffic decreased congestion by nearly 30 percent. In its first year of use, the Harbor Tunnel Thruway carried 21,000 vehicles. [ [http://www.dcroads.net/crossings/harbor-tunnel/ Harbor Tunnel Thruway (I-895)] ]

Short extensions have since been built on both ends to connect it to Interstate 95 - the north end as part of the , constructed in 1963, and the south end in 1973. (Until I-95 was built through Baltimore, the JFK Memorial Highway and the Harbor Tunnel Thruway simply connected directly to each other.)

The tunnel became increasingly congested and overcrowded as I-95 was completed throughout the rest of Maryland; due to a lack of consensus over I-95's route through Baltimore, the Harbor Tunnel Thruway found itself serving as the de facto I-95. Despite the construction of the in 1977, thus completing I-695, traffic levels continued to rise. Permanent relief did not come until the was opened on November 23, 1985. Once the Fort McHenry Tunnel was opened, traffic levels plummeted, allowing the MdTA to close the tunnel in March 1987 for an ambitious two-year reconstruction project.

Due to the heavy congestion experienced on I-95 within and north of Baltimore, the MdTA intends to rebuild the northern junction between I-95 and I-895. At the moment, I-895 is the 'straight route' through the junction, with traffic wanting to stay on I-95 southbound having to weave to the right and exit from itself; this is the result of I-95 in Baltimore city being newer than what is now I-895. The MdTA intends to reconstruct the junction to make I-95 the 'straight route'; south of the junction, I-95 will be widened to eight lanes, and north of the junction, I-95 will be widened to twelve lanes as far as the northern I-95/I-695 interchange at Exit 64 (where a stack interchange will replace the existing double-crossover junction).

The reconstruction of this interchange is part of the works on Section 100 of the JFK Highway; it began in 2006 and is expected to be completed in 2011.

Exits are numbered from south to north, in accordance with guidelines.-

It should be noted that on some GPS maps (such as ), this spur is called the Harbor Tunnel "Trafficway".

See for exits on Interstate 895A. The single numbered exit matches the number given to its companion ramp from I-695 east to I-895B south.-