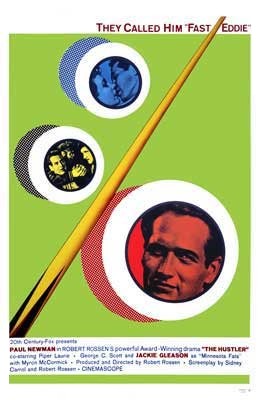 "The Hustler" is a 1961 American . It tells the story of small-time pool hustler, "Fast Eddie" Felson, and his desire to prove himself the best player in the country by beating legendary pool player "Minnesota Fats." After initially losing to Fats and getting involved with unscrupulous manager Bert Gordon, Eddie returns to beat Fats, but only after paying a terrible personal price.

"The Hustler" is an adaptation of the 1959 novel of the same name by . and adapted the novel for the screen. Rossen directed the film, shot on location in New York City. It stars as Eddie Felson, as Minnesota Fats, as Sarah and as Bert.

The film was a major critical and popular success, gaining a reputation as a modern classic. Its exploration of winning, losing, and character garnered a number of major awards; it is also credited with helping to spark a resurgence in the popularity of pool. A real pool hustler was inspired to adopt the name of Gleason's character, Minnesota Fats, and to use the association with the film in his search for celebrity.

Small-time pool hustler "Fast Eddie" Felson () travels cross-country with his partner Charlie () to challenge the legendary player "Minnesota Fats" (). Arriving at Ames, Fats's home pool hall, Eddie declares he will win $10,000 that night. Fats arrives and he and Eddie agree to play for $200 a game. After initially falling behind, Eddie surges back to being $1,000 ahead, and suggests raising the bet to $1,000 a game; Fats agrees. He sends out a runner, Preacher () to Johnny's Bar, ostensibly for a bottle of whiskey, but really to get professional gambler Bert Gordon () to the hall. Eddie gets ahead $11,000 and Charlie tries to convince him to quit, but Eddie insists the game will end only when Fats says it is over. Fats agrees to continue after Bert labels Eddie a "loser." After 25 hours and an entire bottle of bourbon, Eddie is ahead over $18,000, but loses it all along with all but $200 of his original stake. At their hotel, Eddie leaves half of the remaining stake with a sleeping Charlie and leaves.

Eddie stashes his belongings at the local bus terminal, where he meets Sarah Packard (), an alcoholic "college girl" who walks with a limp. He meets her again at a bar. They go back to her place but she refuses to let him in, saying he is "too hungry." Eddie moves into a rooming house and starts hustling for small stakes. He finds Sarah again and this time she takes him in, but with reservations.

Charlie finds Eddie at Sarah's and tries to persuade him to go back out on the road. Eddie refuses and Charlie figures out he plans to challenge Fats again. Eddie realizes that Charlie held out his percentage and becomes enraged, believing that with that money he could have rebounded to beat Fats. Eddie dismisses Charlie as a scared old man and tells him to "go lie down and die" by himself.

At Johnny's Bar, Eddie finds a poker game where Bert is sitting and Eddie loses $20. After the game, Bert tells Eddie that he has talent as a pool player but no character. He figures that Eddie will need at least $3,000 to challenge Fats again. Bert calls him a "born loser" but nevertheless offers to stake Eddie in return for 75% of his winnings. Eddie refuses.

Eddie hustles a local pool shark, who breaks Eddie's thumbs. Sarah cares for him and tells him she loves him, but he cannot say the words. When his thumbs heal, Eddie agrees to Bert's terms, deciding that 25% of something is better than 100% of nothing.

Bert, Eddie and Sarah travel to for the , where Bert arranges a match for Eddie against a wealthy local named Findley (). The game turns out to be billiards, not pool. Eddie loses badly and Bert refuses to keep staking him. Sarah pleads with Eddie to leave with her, saying that the world he's living in and its inhabitants are "perverted, twisted and crippled;" he refuses. Seeing Eddie's anger, Bert agrees to let the match continue at $1,000 a game. Eddie comes back to win $12,000. He collects his $3,000 share and decides to walk back to the hotel. Bert arrives first and subjects Sarah to a humiliating sexual encounter. After, she scrawls "PERVERTED", "TWISTED" and "CRIPPLED" in lipstick on the bathroom mirror. Eddie arrives back at the hotel to learn that she has killed herself.

Eddie returns to challenge Fats again, putting up his entire $3,000 stake on a single game. He wins game after game, beating Fats so badly that Fats is forced to quit. Bert demands a share of Eddie's winnings but Eddie, invoking the memory of Sarah, shames Bert into giving up his claim.

The Tevis novel had been optioned several times, including by , but attempts to adapt it for the screen were unsuccessful. Director Rossen's daughter speculates that previous adaptations focused too much on the pool aspects of the story and not enough on the human interaction. Rossen, who had hustled pool himself as a youth and who had made an abortive attempt to write a pool-themed play called "Corner Pocket", optioned the book and teamed with Sidney Carroll to produce the script. [Rossen, Carol. DVD commentary, "The Hustler" Special Edition]

According to 's agent, Martin Baum, Paul Newman's agent turned down the part of Fast Eddie.

Rossen filmed "The Hustler" over six weeks, entirely in . Much of the action was filmed at two now-defunct pool halls, McGirr's and Ames Billiard Academy.

Early shooting put more focus on the pool playing, but during filming Rossen made the decision to place more emphasis on the love story between Newman and Laurie's characters. [cite news
last =Kilgallen
first =Dorothy
title = Edith Piaf Worries Friends
work = Lowell Sun
date = 1961-04-21 ] Despite the change in emphasis, Rossen still used the various pool games to show the strengthening of Eddie's character and the evolution of his relationship to Bert and Sarah, through the positioning of the characters in the frame. For example, when Eddie is playing Findley, Eddie is positioned below Bert in a but above Findley while still below Bert in a three shot. When Sarah enters the room, she is below Eddie in two shot while in a three shot Eddie is still below Bert. When Eddie is kneeling over Sarah's body, Bert again appears above him but Eddie attacks Bert, ending up on top of him. Eddie finally appears above Bert in two shot when Eddie returns to beat Fats. [Casty p. 43]

Scenes that were included in the shooting script but did not make it into the final film include a scene at Ames pool hall establishing that Eddie is on his way to town (originally slated to be the first scene of the film) and a longer scene of Preacher talking to Bert at Johnny's Bar which establishes Preacher is a . [Rossen p. 189-92]

Pool champion has a as Willie, who holds the stakes for Eddie and Fats's games. Boxing champion also has a cameo as a bartender.

"The Hustler" is fundamentally a story of what it means to be a human being, couched within the context of winning and losing.

Film and theatre historian has identified "The Hustler" as one of a handful of films from the early 1960s that re-defined the relationship of films to their audiences. This relationship, he writes, is "one of challenge rather than flattery, of doubt rather than certainty."

"The Hustler" had its world premiere in on September 25, 1961. Prior to the premiere, hosted a midnight screening of the film for the casts of the season's Broadway shows, which generated a great deal of positive . [cite video
people = Naylor, David (director)
title = The Hustler: The Inside Story
medium = film
year2 = 2001] Initially reluctant to publicize the film, 20th Century Fox responded by stepping up its promotional activities. [Casty p. 40]

The film was well-received by critics, although with the occasional caveat. "Variety" praised the "solid performances"

Newman was nominated for a for Best Actor. Gleason and Scott were each nominated for Best Supporting Actor and Scott was also nominated as Best New Star of the Year. [cite web
title = Awards Search: The Hustler
publisher = Hollywood Foreign Press Association
url = http://www.goldenglobes.org/browse/film/25327
accessdate = 2008-03-31]

In the decades since its release, "The Hustler" has cemented its reputation as a classic. It currently holds a 97% "fresh" rating at . [cite web
title = The Hustler
publisher = Rotten Tomatoes
url = http://www.rottentomatoes.com/m/hustler/
accessdate = 2008-04-24] , echoing earlier praise for the performances, direction and cinematography and adding laurels for editor , cites the film as "one of those films where scenes have such psychic weight that they grow in our memories."

Paul Newman reprised his role as Fast Eddie Felson in the 1986 film "", for which he won the Academy Award for Best Actor in a Leading Role. A number of observers and critics have suggested that this Oscar was in belated recognition for his performance in "The Hustler". [cite web
last = Berardinelli
first = James
title = Review: Hustler
publisher = Reelviews.net
date = 2002
url = http://www.reelviews.net/movies/h/hustler.html
quote = 25 years late, Newman won the Best Actor Oscar for playing Fast Eddie.
accessdate = 2008-04-24]

In 1997, the selected "The Hustler" for preservation in the United States as "culturally, historically, or aesthetically significant." [cite news
title = New to the National Film Registry
work = The Library of Congress Information Bulletin
publisher = Library of Congress
date = December 1997
url = http://www.loc.gov/loc/lcib/9712/nfr.html
accessdate = 2008-03-20] Carroll and Rossen's screenplay was selected by the in 2006 as the 96th best motion picture screenplay of all time. [cite web
title = 101 Greatest Screenplays
publisher = Writers Guild of America West
url = http://www.wga.org/subpage_newsevents.aspx?id=1807
accessdate = 2008-03-20]

"The Hustler" is credited with sparking a resurgence in the popularity of pool in the United States, which had been on the decline for decades. [Dyer p. 119] The film also brought recognition to Willie Mosconi, who, despite having won multiple world championships, was virtually unknown to the general public. [Dyer p. 117]

Perhaps the greatest beneficiary of the film's popularity was a real-life pool hustler named . Mosconi claimed in an interview at the time of the film's release that the character of Minnesota Fats was based on Wanderone, who at the time was known as "New York Fatty". Wanderone immediately adopted the Minnesota Fats nickname and parlayed his association with the film into book and television deals and other ventures. Author Walter Tevis denied for the rest of his life that Wanderone had played any role in the creation of the character. [Dyer pp. 121–2] Other players would claim, with greater or lesser degrees of credibility, to have served as models for Fast Eddie, including Ronnie Allen, , Ed Parker and . [Dyer p. 127]