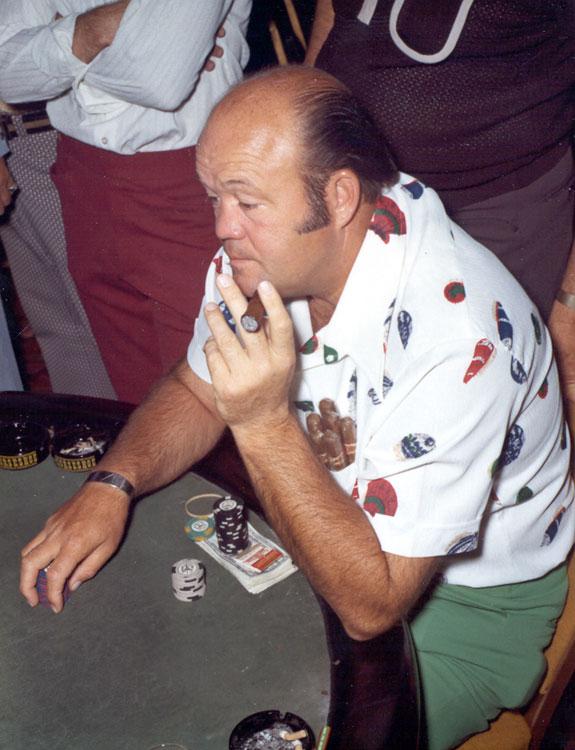 Walter Clyde Pearson (, in &ndash; , ) was an American professional player.

Pearson grew up in Tennessee in a large family with nine siblings. He got his nickname "Puggy" from a childhood accident that left him with a disfigured nose at the age of 12. He dropped out of school in the 5th grade, and at the age of 17 he joined the , where he served three terms. Already known as one of the best pool players in the world, he cut his teeth at poker and gambling while in the service.

Prior to 1949, all poker games were cash games; a player could cash out his chips and leave at any time. Pearson originated the idea of a freezeout tournament and shared his idea with fellow gambler "Nick the Greek" Dandolos. Dandalos later brought the idea to legendary casino owner , who in turn founded the .

Pearson won the (WSOP) main event when his A♠ 7♠ defeated 's red|K♥ J♠. He has a total of 4 WSOP bracelets (two of which were in , which was considered his best game.)

Pearson was inducted into the in 1987.

* Pearson was also a keen golfer, who played at scratch. (Doyle "Texas Dolly" Brunson considered him to be a better pressure putter than , and Tom Watson.)
* Pearson regularly played whilst smoking a .
* Pearson was the only poker player to attend every WSOP from 1970 to 2005.Fact|date=February 2007
* Pearson bought a tour bus with "Puggy Pearson - Roving Gambler" painted on it. Underneath was written the challenge "I'll play any man from any land any game he can name for any amount I can count." Further below (in smaller writing) was written "Provided I like it."
* confirmed that he heard a story that Pearson once urinated on a dealer. [ [http://groups.google.com/group/rec.gambling.poker/tree/browse_frm/thread/b6cfaa8e1853492d/2450e20cfb8f3d4b Rec.gambling.poker] ]