Douglas Taylor (Doug) Ross (1929 - 31 Jan 2007) was an American computer scientist pioneer, and Chairman of SofTech, Inc..[1] He is most famous for originating the term CAD for computer-aided design, and is consider to be the father of Automatically Programmed Tools (APT) a language to drive numerically controlled manufacturing.

In the 1954 he started working at MIT, where he participated in the MIT Whirlwind (computer) project. In 1969, Ross founded SofTech, Inc.,[4] which was an software/consulting company and early supplier of Pascal compilers. Ross lectured at MIT’s Electrical Engineering and Computer Science Department and was chairman emeritus.[5] He served as the company’s president of Softech from 1969 to 1975, and afterwards became Chairman of the Board of directors.

Among his many honors are the Joseph Marie Jacquard Memorial Award from the Numerical Control Society, in 1975, and the Distinguished Contributions Award from the Society of Manufacturing Engineers in 1980, and Honorary Engineer of the Year Award from the San Fernando Valley Engineer’s Council, 1981.[3] At MIT in the Department of Electrical Engineering and Computer Science they named the Douglas T. Ross Career Development Associate Professor of Software Development after him. 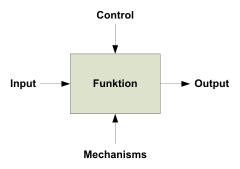 As the inventor of SADT, Structured Analysis and Design Technique, Ross was an early developer of structured analysis methods.[6] During the 1970s, along with other contributors from SofTech, Inc., Ross helped develop SADT into the IDEF0 method for the Air Force's Integrated Computer-Aided Manufacturing (ICAM) program's IDEF suite of analysis and design methods.[7]

Doug Ross has written dozens of articles and some reports.[10] A selection: