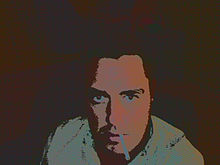 Dean Cavanagh is an award-winning artist, screenwriter, film and TV producer and music producer born in Bradford, in the West Riding of Yorkshire, in 1966. He lives with his wife and children in Bingley.

He started his writing career in freelance journalism, contributing to UK magazines such as The Face, Melody Maker, i-D and NME.

In 1990, at the height of the acid house scene, he founded the club culture magazine Herb Garden and a band with Enzo Annecchini. His electronic music outfit, Glamorous Hooligan, was picked up by Warner Bros. offshoot Arthrob, and in 1996, they released a critically acclaimed album Naked City Soundtrax. Glamorous Hooligan's first album Wasted Youth Club Classics was released by indie label Mass Of Black in 1994 Cavanagh has stated that his proudest moment was getting Robert Anton Wilson to guest on one of the tracks.[citation needed] As a musician, he featured on the late John Peel's Sounds of the Suburbs TV show, in the late 1990s. He still produces music under the name Narco Bear, Ego Death Squad and Disco Heist.

As a clubland promoter, he ran popular house music, techno, and drum and bass clubs in Bradford, called Tolerance, before moving on to Leeds, where he promoted the successful Soundclash club happenings bringing in respected DJs such as Andrew Weatherall, Alex Patterson, Adrian Sherwood and J. Saul Kane.

His first short story "Mile High Meltdown" was included in the best-selling Disco Biscuits anthology, published by Sceptre, and brought rave reviews, but it was music that first introduced him to the public domain. Music journalism was where he began his career. As a journalist he contributed to The Guardian, The Daily Mail, The Times, The Telegraph, New Musical Express, Melody Maker, Positive Energy of Madness, The Face, as well as the Herb Garden, and i-D. He has also worked in copywriting, penning many commercials and working alongside directors John McFarlane and Tarsem Singh before progressing to writing theatre plays and film.

Cavanagh wrote a late night cult sitcom called Honky Sausages that McFarlane directed for UK Play TV and gave a start to the actress Leila Morse, Eastenders. Cavanagh developed many projects with Terry Gilliam's producer Ray Cooper for John Kamen's company Radical Media. One of these projects, a biopic of artist Francis Bacon was pipped to the post by the film Love Is the Devil.

Cavanagh works regularly with Irvine Welsh of Trainspotting fame. Their play Babylon Heights has been performed to critical acclaim in Dublin, Chicago, Los Angeles, San Francisco and New Zealand. Shooting on their screenplay The Meat Trade starring Robert Carlyle and Colin Firth and directed by Antonia Bird begins shooting in summer 2012. In 2004, Cavanagh and Irvine were BAFTA nominated for their BBC Three short film Dose starring Jonathon Lewis Owen, Kate Jarman and Julia Davis and directed by Philip John. Irvine Welsh and Dean Cavanagh have a number of projects in development with companies such as Channel 4, HBO and BBC. Wedding Belles is a feature film written by Irvine Welsh and Dean Cavanagh that was transmitted to critical acclaim by C4 in March 2007. It stars Shirley Henderson (A Cock and Bull Story, 24 Hour Party People, Marie Antoinette) Michelle Gomez (Green Wing, The Acid House), Shauna McDonald (The Descent), Kathleen McDermott (Morvern Callar) and Jonathon Lewis Owen (Dose). It is produced by Jemma Rodgers (The League of Gentlemen) and directed by Philip John. Cavanagh and Welsh co-executive produced Wedding Belles. It was nominated for a best writing BAFTA.

Cavanagh has done a number of script doctoring assignments for companies such as Endemol, Warner Bros., Sony, Canal Plus and Lionsgate both in the UK and the US. Fearful of being pigeonholed, he has said that he doesn't really have a niche, but does tend to veer towards projects that challenge the viewers' assumptions.

Two projects close to his heart are Sympathy for the Devil, a film chronicling the life of Aleister Crowley, and an untitled film about the making of the highly controversial cult film Performance that starred Mick Jagger, Anita Pallenberg, Edward Fox and was directed by Donald Cammell.

Cavanagh and Irvine Welsh have an ambitious 3-season, six-part TV series called The Food Chain that was developed for HBO. They now plan to make it for British TV.

In a recent interview for The Independent, he said he watched hardly any British TV and that he was influenced by TV shows such as The Wire, stating that it is "simply a work of art, the most compelling and truthful TV series ever made". He cites Carnivàle, Curb Your Enthusiasm The Sopranos, Treme and The Shield as examples of why US TV leaves its British counterpart languishing. Cavanagh is an often outspoken critic of what he sees as the "moronizing" of British TV.

Cavanagh and Irvine Welsh are currently developing a number of feature length screenplays together and independently of each other. Cavanagh is represented by literary agent Jon Elek at A.P. Watt His artworks are represented by Opus Art in the UK. As of August 2011 his original screenplay "Bad Trip" - about a group of bohemians camping on the Balearic island of Tagomago, and being hunted by Satanists - has been optioned being by Rebekkah Wray Rogers of Warp Films, This Is England, Dead Man's Shoes.

Links to articles about Dean Cavanagh