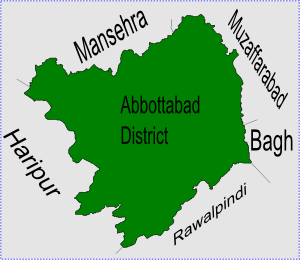 By 1901,a Zimindari School had been established in Bakote with 56 students, the first (student?) was famous Khakha Bumba Tribal Chief Sardar Hasan Ali Khan. The first journalist of , "Qazi Hadayetullah", was from Bakot, he worked for 23 years at the Daily Zimidar Lahore (1932-52).

Bakot was badly affected by the , as the epicentre was in nearby Kashmir.

Bakot is located in the east of Abbottabad district, where it forms part of the border with the Muzaffarabad and Bagh districts of . Bakote also borders the following union councils within Abbottabad District, to the north by Nambal, to the south by and to the west by , , .

Dr.Ansaar ur Rehman Abbasi by profession a medical doctor and known for his philanthropist activities in Social Sector. Having the honour of being the the first Dhund Male Medical doctor of Circle Bakote. Graduated from AMC Abtd,had worked in Govt & Non Govt Organisations. Presently serving in MOH KSA.
* COL Mumtaz Abbasi is prominent personality of the area. He is the first commissioned officer of UC Bakote and has contributed positively in social sector of the area.He has been awarded Tamgha-i-Imtiaz Military(TIM)for his meritorious services in the Army. Presently he is employed in GHQ Rawalpindi.Miss Muneera Abbasi comes in the category of yet another famous figure of the area of Bakote. She was the first female Judge of the said territory with the few major distinctions attached with it i.e decided Major portion of pending litigation in the shortest span of time, nominated as the best Civil Judge of NWFP thrice in three years. She has been deputed to the interior ministry and is now a deputy Secretary in Islamabad.
*Dr is a physician by profession, Serving as an Editor-in-chief of Royal Journal of Medicine. He specialized in the field of medicine, and additionally associated with the Wisden Cricketer magazine in the capacity of Sports columnist. Further to that, he is the Chief executive of the Pakspin editorial post of the famous Cricket Magazine i.e Cricinfo.com. Dr. Kamran Abbasi has grabbed the attention of the whole world due to his Brilliant and Splendid writing and mind blowing insight on the game of cricket in every section of the society.