In Greek mythology, Despoina, Despoena or Despoine, was the daughter of Demeter and Poseidon and sister of Arion.[1] She was the goddess of mysteries of Arcadian cults worshipped under the title Despoina,"the mistress" alongside with her mother Demeter,one of the goddesses of the Eleusinian mysteries. Her real name could not be revealed to anyone except those initiated to her mysteries.[2] This name is consequently unknown. She was later conflated with Kore (Persephone) the queen of the underworld in the Eleusinian mysteries who was probably originally daughter of Demeter and Poseidon rather than of Demeter and Zeus as it appears in ancient literature. The cult of Despoina is very important for the study of ancient mystery religions.

In the primitive myth, Poseidon saw Demeter, the Earth mother and desired her. To avoid him, she took her archaic form of a mare, but he took the form of a stallion and mated with her. From this union Demeter bore a daughter Despoina and a fabulous horse Arion (Ἀρείων). Due to her anger at this turn of events, Demeter took on the epithet Erinys, or raging.[3]

The word Despoina (Δέσποινα) "mistress" is derived from the Mycenean Greek *des-potnia which is interpreted as "lady or mistress of the house", from PIE *dem/*dom "build, house",Greek "domos" and potni "lady,mistress", Greek "potnia". The masculine form is despotes (Δεσπότης), "master of the household.[4] Related words are the Mycenean Greek potnia and Posedao (Poseidon), which were inherited in classical Greece with the same meaning. Demeter is probably a relative word interpreted as "mother of the house" (from PIE *dems-mater).[5] 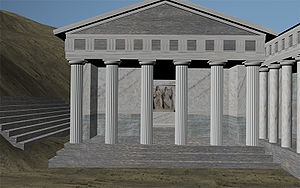 Perspective reconstruction of the temple of Despoina:The acrolithic statues of Demeter (L) and Despoina (R) are visible at the scale in the cella

Despoina became worshipped in a sanctuary at Lycosura west to the town of Megalopolis. This is a very important site for the study of ancient mystery religions, although this cult remained regional than panhellenic. Despoina was later conflated with Persephone. First in that place there was a temple of Artemis Hegemone (the leader) with a bronze image (apparently Hecate). From this place there was an entrance to the sacred enclosure of Despoine. In the portico there was a tablet with the inscriptions of the mysteries. In front of the temple there was an altar to Demeter and another to Despoine, after which was one of the Great Mother. Demeter carried a torch in her right hand and her other hand was laid upon Despoine. By the side of Demeter stood Artemis (probably also identified with Hecate). By the image of Despoine stood Anytos, one of the Titans. The Arcadians believed that Despoine was brought up by Anytos and Artemis was not the daughter of Leto but of Demeter. Besides the temple there was the hall where the Arcadians celebrated the mysteries and beyond it a grove sacred to Despoine and altars of Poseidon Hippios (horse) and other gods too. 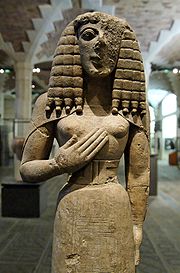 Lady of Auxerre Louvre-An Archaic (640 BC) image from Crete, probably a version of the Minoan Goddess identified with Kore.

Despoine was her surname among the many, just as they surnamed Demeter's daughter by Zeus Kore (the maiden).[6][7]

In the mysteries Demeter was a second goddess under her daughter, the unnameable "Despoina".[8] It seems that the myths in isolated Arcadia were connected with the first Greek-speaking people who came from the north during the bronze age. The two goddesses had close connections with the rivers and the springs. They were related with the god of the rivers and the springs Poseidon and especially with Artemis, who was the first nymph. Her epithet "the mistress" has its analogue in Mycenean Greek inscriptions found at Pylos in southern Greece and Knossos in Crete. Despoina was later conflated with Kore (Persephone), the goddess of the Eleusinian mysteries in a life-death-rebirth cycle. Karl Kerenyi asserted that the cult was a continuation of a Minoan Goddess worship.

Despoina was also used as an epithet for several goddesses, especially Aphrodite, Persephone, Demeter and Hecate.[9][10] Persephone and Demeter were the goddesses of the Eleusinian mysteries, identified as the two potniai (mistresses) in a Linear B inscription at Pylos.[11] At Olympia they were called Despoine (Δέσποινες: the mistresses).[12] The epithet may recall the unnameable mistress of the labyrinth.[13][14]

At the time of Pausanias visit in the 2nd century BE, the sculptures would have been three hundred or more years old. In the 2nd century CE, a statue of the emperor Hadrian was dedicated in the temple. Coins from Megalopolis, from the Severan period in the early 3rd century appear to depict the cult statue group.[15] There is a small museum at the archaeological site, housing small finds as well as part of the cult group,while the remains of the cult statues of Despoina and Demeter are displayed at the National Archaeological Museum of Athens. The most significant is the veil of Despoina with a complex decorative program, probably representative of the types of embroidered woven materials able to be created by contemporary artists. The heads of Artemis, Demeter and Anytus and a Tritoness from the throne are also displayed.