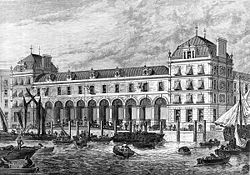 Old Billingsgate Market is the name given to what is now a hospitality and events venue in the City of London, England, based in the Victorian building that was formerly Billingsgate Fish Market.

The first Billingsgate Market building was constructed on Lower Thames Street in 1850 by the builder John Jay, and the fish market was moved off the streets into its new riverside building. This was demolished c.1873 and replaced by an arcaded market hall (designed by City architect Sir Horace Jones) and built by John Mowlem & Co. in 1875, the building that still stands in Lower Thames Street today.[1]

In 1982, the fish market itself was relocated to a new building close to Canary Wharf in the London Borough of Tower Hamlets, east London. The 1875 building was then refurbished, by architect Lord Rogers, originally to provide office accommodation.

Now used as an events venue, such as for the MTV tribute for The Cure, it remains a major London landmark and a notable Grade II Listed building.