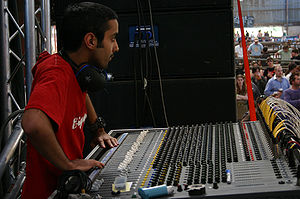 A monitor engineer and console at an outdoor event

Live sound mixing is the art of combining and processing a number of audio signals together to create a "mix" that the audience or performers at a live show hear. There can be a variety of different mixes required, depending on the performance requirements. Three types are: Front of House (FOH), which is primarily for the audience; monitor, which is exclusively for the performer(s); and recording or broadcast (cue), for special purposes.

Whenever sound reinforcement is needed for a live performance of either music, theater, spoken word, or sporting events, a specialized sound system is required. The primary goal is to cover the audience area and stage with a sufficiently amplified signal. The stage or monitor mix is necessary to enable performers to hear themselves and any other parts of the performance as needed. Also, the proper monitor mix can minimize time delays on large stages to help synchronize the performance. In addition, the stage mix can overcome the level of the house sound which can be confusing to listen to on the stage.

The source of sounds for a live mix can be electronic musical instruments, acoustic instruments, playback of pre-recorded sounds and music, voices, other sounds ambience, and/or sound effects. This part of the sound system generally comprises a number of microphones on the stage, to pick up acoustic sounds, and/or a wide variety of other electronic signals.

If the mixing is to occur at a distance from the stage, it is customary for the individual signals to be balanced, low impedance in order to have noise immunity and retain their frequency spectrum. Widely differing levels can be accommodated in modern sound reinforcement systems. An additional requirement is to run the signals with standardized connectors and wiring.

A mixing board, a number of speakers (passive or active), power amplifiers, a number of audio processing devices, and the cabling, rigging, and power system to connect all of these components is usually what makes up a complete Sound Reinforcement System. Having the sound mixed or manipulated in real time is required as things are happening live and need constant minor adjustment. Some performers prefer to have the interactions of live musicians translated to the audience directly. An example of this is the old style bluegrass group using only one microphone. The musicians balance their ensemble sound by ear, and move toward the mic to emphasize solos. On the other end of the spectrum are musical or dramatic productions which can have many dozens of individual sources and dozens of sub-mixes out to dozens of speaker systems to deliver the proper mix to each of the performers.

A live sound engineer can mix the sound from the audience position, from a specialized control room, from the stage, or a remote truck, depending on the performance requirements. A trend in large scale theatrical productions is to minimize or eliminate the amount of sound equipment in the audience area so as to retain more seats for the audience. Digital measurement systems such as Smaart, Spectrafoo and Meyer SIM combined with test microphones in the audience area can be used to help the operator monitor the output of multiple loudspeaker zones. Digital control systems can be used for to implement indicated adjustments. For larger and more complex sound systems, more engineers and technicians can be required. The two primary engineers are the Front of House (FOH) engineer and the Monitor Engineer. The Front of House engineer mixes the sound that the audience hears in the house and the Monitor engineer mixes the sound that the performers hear on stage. A live sound engineer refers to a person that is experienced in the set up and operation of a sound reinforcement system.

Equipment for a touring act is often packed in heavy-duty reusable road cases to prevent damage during transportation, load-in, and load-out. Some items might be packed partially assembled and transported in custom-built cases or transport frames, to minimize set-up and tear-down time.

The monitor engineer's role is most essential at music events, as opposed to spoken word events. In most cases, each performer on stage has their own individual mix that is custom tailored by the monitor engineer to suit their audio needs. The monitor engineer is then faced with the challenge of pleasing anywhere from four to ten or more musicians with a good mix. At shows with a separate monitor mix position, that mixer is typically located just off-stage, to provide easier communication between the performers and the monitor engineer. Though monitor speakers are still in use today, the newest monitor system is what is known as an In Ear Monitor (IEM) system. In Ear Monitors look somewhat like hearing aids, and they are basically a pair of headphones that are custom molded for the musicians' ears and therefore greatly reduces the outside noise that they hear. This isolation protects the musicians' ears from being damaged from the long durations of high volumes that they are subjected to on a large stage. It also allows them to hear their individual mix with more clarity. At the largest and highest budgeted of concert events, each musician is hearing their own individual in ear mix. This involves much more than simply mixing the sound, but requires a great deal of additional audio processing to increase the quality of the performer's mix. Large shows will often use a mixer that is specifically designed for monitor applications. 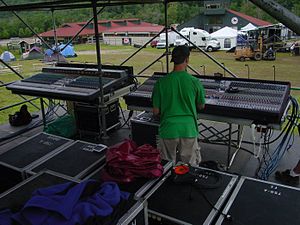 Two FOH consoles at an outdoor event. Each console is typically dedicated to a single band or artist. The telephone handset on the right is part of a closed-circuit intercom system to allow the FOH engineer to communicate with the monitor engineer.

The front of house engineer controls the mix for the audience, and most often operates from the middle of the audience or at the last few rows of the audience from an equipment area known as the "Front Of House Position" or "FOH". A front of house engineer will often use a variety of processors and effects to provide a particular style to the mix. As with the monitor engineer, front of house engineers are constantly listening to the overall blend in order to make decisions about adjusting the volume and frequency of each instrument or voice on stage. The front of house engineer often makes decisions about which effects devices to use and adjusts their relative levels and blends to meet his or her interpretation of the musical requirements of the song. For smaller shows such as bar and smaller club gigs, it is common for the monitors to be mixed from the Front of House position, and the number of individual monitor mixes could be limited by the capabilities of the Front of House mixer.

Other crew members, such as the lighting console operator, might also work from the FOH position, since they need to be able to see the show from the audience's perspective.

For shows that have separate Front of House and monitor mix positions, the audio snake is often designed to provide one or more 'splits' of the audio signals coming from the stage inputs. One split will go to the Front of House mixer, and the other will go to the monitor mixer. In such cases, the snake might be configured with switchable or permanent ground lifts or transformers to isolate the splits and help guard against electrical and RFI noise from being introduced into the system. This is important to take into consideration, as the isolated/lifted path(s) cannot supply phantom power to devices on stage. This is to ensure that phantom power comes from only one place. Very large snakes could also have additional splits for multitrack recorders, broadcast trucks, etc. Some acts use digital snakes to improve routing/control flexibility and save weight, compared to an analog snake and multicore cable.

Set up, tear down, and technical rehearsals

The other duty that the live sound engineer serves is the set up and the tear down (removal or striking) of these sound reinforcement systems. For large tours and events, this is often a long (sometimes multiple day) and strenuous process. This will involve unloading the equipment, moving it all into the venue, setting up the systems and then sound-checking. For larger events the engineer will be assisted by a number of audio technicians some of whom may be responsible for maintaining the system during the show while the mix engineer focuses on the sound of the show. After the show is done, the live sound engineers and techs must tear down and load out the sound system for the next show on the tour. The tear down will often take significantly less time than the set up, because there is a much more obvious end objective (i.e. having all the equipment packed into the trucks). Very large touring acts might have two complete sets of equipment that are used at alternating venues on the tour, due to the amount of time needed for the set-up and tear-down of each show. This is done to maximize the number of shows that can be performed in a given amount of time on the tour.

Larger shows and touring acts might have a few days to a few weeks of technical rehearsals. This is time before the start of a tour or a performance run that is used to work out many of the technical issues related to the show. Technical rehearsals are used both by the performers to hone portions of their performances, and also by the engineers, technicians and crew to resolve issues, refine cues, refine the configuration of show control systems, and other logistical details, such as finding the most efficient way to pack the equipment into trucks for transportation to the next venue, if the show is a touring act. In general, the larger and more complex a show is, the more time is allotted for technical rehearsals, though scheduling constraints might impose firm limits on the amount of rehearsal time that is available.