Mark Lombardi (1951 – March 22, 2000) was an American Neo-Conceptualist and an abstract artist who specialized in drawings attempting to document financial and political frauds by power brokers, and in general 'the uses and abuses of power'.[1]

Lombardi was born in the town of Manlius, New York, just outside Syracuse, New York. He majored in art history at Syracuse University. He graduated with a B.A in 1974. While still an undergraduate, Lombardi had a job as chief researcher for a 1973 art exhibit Teapot Dome to Watergate- a multimedia collage, all of whose elements focused on various US governmental scandals; it was motivated by the then-ongoing Watergate scandal. Lombardi's work on the exhibition was excellent, and, in 1975, James Harithas (the director of the Syracusan Everson Museum) hired him to be a curator at the Contemporary Arts Museum in Houston, Texas, which Harithas had become a director of. Lombardi accepted the job at and worked there for approximately two years, until 1976. Then, Lombardi became a general reference librarian for the Fine Arts department in the Houston Public Library, where he started a regional artist archive.

These jobs all exposed Lombardi to large amounts of information, and gave him experience in aggregating and collecting those masses; in addition, he had time to conduct research in his own interests. It was around this time he met his future wife, Day Barlow (whom he married in 1980). After college, Lombardi moved to Houston where he worked for a time as assistant curator at the Museum of Contemporary Art. While in Houston, he also opened a small art gallery. The gallery lasted only a year, and Lombardi began devoting more time to other things – including two books, one for the drug wars and another on the neglected and forgotten art genre of panoramas.

In the early 1990s, Lombardi began researching the many scandals of the time, such as the BCCI scandal, or the Harken Energy scandal, or the Savings and Loan scandal; his thousands of index cards began to overwhelm his ability to deal with it. To cope, Mark began assembling them into physical outlines, and then into hand-written diagrams. They were intended to be a tool, to provide focus to his work, but he "...soon decided that this method of combining text and image in a single field (called a drawing, diagram or flow chart, whichever you prefer) really worked for me in other ways as well." This decision was spurred, according to Lombardi, while he was talking with a friend (Leonard Gumport, a lawyer in Los Angeles), about one portion of the Iran-Contra scandal, a one Saudi Arabian Adnan Khashoggi, whom Lombardi described as "the Saudi commercial agent and playboy arms dealer who had figured prominently in the Iran-Contra and had made large investments in the U.S. including in Houston. As Gumport spoke, I began taking notes, then sketching out a simple tree chart, showing the breakdown of Kashoggi's American holdings. Within days, I began making more of these charts, depicting other corporate networks I had researched. I was writing several pieces at the time and found the charts a useful, quick reference to the material at hand."

Initially, as the subject of one of his manuscripts, the primary focus was on the drug wars, but because of Pete Brewton's January 1990 newspaper series about the Houston S&L scandal, in which Brewton alleged the Bush family, CIA members, and Mafia members in a de facto conspiracy to steal vast sums of money, Lombardi shifted his emphasis to investigating the laundering of the stolen money. Interestingly, the scandals were not a completely abstract pursuit; the husband of a former classmate was involved in the incidents; when he disappeared, the only portion of his body recovered was his jawbone.

After Lombardi divorced his wife in October 1996, Lombardi moved to New York City since that would get him away from Houston, and because his work was going to be shown in a show at New York's Drawing Center, called Selections: Winter 1997. Not least, one of his friends, Fred Tomaselli lived in New York, and had been trying to persuade Lombardi to move to Williamsburg, New York.

While for most of his career, Lombardi was an abstract painter of no particular note (he pursued it sort of as a hobby during his actual career as an archivist and reference librarian), six years before his death he switched to the pencil diagrams of crime and conspiracy networks that he would be come best known for.

After two highly successful solo art shows (Silent Partners, shown on 20 November 1998 near Lombardi's apartment; and Vicious Circles - a work drawing upon Jonathan Kwitny's book of the same name dealing with Mafia involvement in the legitimate commercial markets - shown on 14 October 1999) and a popular group show called Greater New York: New Art in New York Now on 27 February 2000 at the P.S. 1 art gallery, Mark Lombardi apparently died of suicide (hanging himself in his Williamsburg, Brooklyn, New York City studio apartment) in March, 2000, three years after he had moved to Williamsburg.

It has been suggested that the strain of recreating one of his masterpieces (the BCCI-ICIC & FAB, 1972-91, which was destroyed by the sprinkler system in Lombardi's apartment), and of living in New York City, and of the destruction of his car by a taxi, as well as the stress of imminent success, all contributed to what the media portrayed as a manic-depressive condition and eventually to his suicide. A number of friends like Andy Feehan were mystified by Mark's death:

"When the news of Mark's death arrived, all of us thought that he was murdered. We assumed that he had made one too many accusations, and that someone made a phone call. We still don't know what happened. We'd read that the medical examiner ruled Mark's death a suicide, but we're unable to understand or accept the idea that Mark would kill himself right when he was at the top of his game."[2] 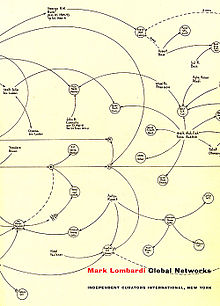 Lombardi called his diagrams Narrative Structures [3] and they are structurally similar to sociograms – a type of graph drawing used in the field of social network analysis, and to a lesser degree to earlier artists like Hans Haacke – but in Lombardi's historical diagrams, each node or connection was drawn from news stories from reputable media organizations. The aesthetic impact is unique – the schematics are elaborate and delicate, yet precise and factual spiderwebs of illustrations depicting alleged networks of criminal conspiracies.

A major exhibit of Lombardi's art, "Mark Lombardi: Global Networks," was organized by Independent Curators, Inc. and curated by Robert Hobbs. The exhibit traveled to nine museums over 2003–2005, and has been the subject of several reviews. A catalog of the exhibit has been published.[3]

A re-exhibition of his work was held at the Pierogi Gallery in 2011.

The following is a list of some subjects that interested Lombardi and were covered in his works: