Thomas F. Dixon, Jr. (January 11, 1864 – April 3, 1946) was an American Baptist minister, playwright, lecturer, North Carolina state legislator, lawyer, and author, perhaps best known for writing The Clansman — which was to become the inspiration for D. W. Griffith's film, The Birth of a Nation (1915).

Born in Shelby, North Carolina, Dixon was the son of Thomas Dixon, Sr., a Baptist minister and farmer, and Amanda Elvira McAfee. As a young man, Thomas Sr. had inherited a number of slaves from his first wife's father. Dixon Sr., while not an abolitionist, did not want to own slaves himself. At one point he was offered US$100,000 for his slaves, but he declined the offer, worried that their new owner might mistreat them.[1] In his adolescence Dixon helped out on the family farm, an experience that he hated, but that he later would say helped him to relate to the plight of the working man.[2] Dixon grew up during Reconstruction following the Civil War. The government confiscation of farm land, the corruption of local politicians, and particularly the vengefulness of Federal troops coupled with the general lawlessness of the time all helped to shape young Dixon into a staunch opponent of what he called one of history's greatest tragedies.[3]

Among Dixon's earliest memories, and perhaps his most important, was the widow of a Confederate soldier who had served under Dixon's uncle Col. Leroy McAfee pleading for his family's help. The widow claimed that a black man had raped her daughter. Public outrage was extremely high with the Civil War still fresh in the minds of most southerners. That night the Ku Klux Klan hanged and repeatedly shot the alleged rapist in the town square.[4] Dixon's mother commented to him that night that "[The Klan are] our people--they're guarding us from harm."[5] It was a moment that etched itself into Dixon's memory: he felt that the Klan's actions were justified, and that desperate times called for desperate measures. Dixon's father, Thomas, Sr., and his uncle Col. McAfee, both joined the Ku Klux Klan early in its history with the aim of "bring[ing] order" to the tumultuous times, and Col. McAfee even attained the rank of Chief of the Klan of the Piedmont area of North Carolina.[5] But, after witnessing the corruption and scandal involved in the Klan they would both dissolve their affiliation with the group and attempt to disband it within their region.[6] 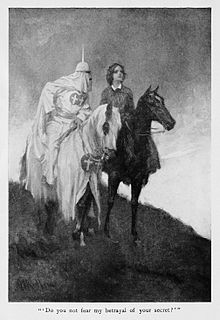 The first page of Dixon's The Ku Klux Klan.

In 1877, Dixon entered the Shelby Academy, where he earned a diploma in only two years. In September 1879 Dixon enrolled at Wake Forest where he studied history and political science. As a student there, Dixon performed remarkably well, and in 1883, after only four years, Dixon earned a masters degree. His record at Wake Forest was outstanding, and he earned the distinction of achieving the highest student honors ever awarded at the university to that date.[7] Following his graduation from Wake Forest, Dixon received a scholarship to attend the Johns Hopkins University political science program. Here he met and befriended future President Woodrow Wilson.[8] On January 11, 1884, despite the objections of his friend Woodrow Wilson, Dixon left Johns Hopkins University to pursue an education and a career on the stage.

Dixon headed to New York City and enrolled in the Frobisher School to study drama. As an actor, Dixon's physical appearance became a problem - he was six foot three inches tall but only weighed 150 pounds, making for a very lanky appearance. One producer remarked that because of his appearance Dixon would not succeed as an actor, but he complimented Dixon for his intelligence and attention to detail and recommended that Dixon put his love for the stage into scriptwriting.[9] Despite the compliment, Dixon returned home to North Carolina in shame.

Upon his return to Shelby, Dixon quickly realized that he was in the wrong place to begin to cultivate his playwriting skills. After his initial disappointment from his Frobisher rejection Dixon, with the encouragement of his father, enrolled in the Greensboro Law School in Greensboro, North Carolina. An excellent student, Dixon received his law degree in 1885.[10]

It was during law school that Dixon's father convinced Thomas Jr. to enter politics. After graduation, Dixon ran for the local seat in the North Carolina General Assembly. Despite being only twenty years of age and not even old enough to vote for himself, he won the election by a two-to-one margin, a victory that was attributed to his masterful oratory skills.[11] Dixon retired from politics in 1886 after only one term in the legislature. He said that he was disgusted by the corruption and the back-door deals of the lawmakers, and he is quoted as referring to politicians as "the prostitutes of the masses."[12] However short, Dixon's political career gained him popularity throughout the South for his championing of Confederate veterans' rights.[13]

Following his career in politics, Dixon practiced private law for a short time, but he would find little satisfaction as a lawyer and he would soon leave the profession to become a minister.

Dixon was ordained as a Baptist minister on October 6, 1886, with his first practice in Greensboro, where he had attended law school.[14] Church records show that in October 1886 Dixon moved to the parsonage at 125 South John Street in Goldsboro, NC to serve as the Pastor of the First Baptist Church. Already a lawyer and fresh out of Wake Forest Seminary, life in Goldsboro must not have been what young Dixon had been expecting for a first preaching assignment. The social upheaval that Dixon portrays in his later works was largely melded through Dixon’s experiences in the crucible that was post-war Wayne County during reconstruction. General Sherman’s army seized the Goldsboro railroad hub at the end of their march through the south, and Union troops occupied it for years after the war. Local author James Monroe Hollowell's Wartime Reminiscences gives detailed accounts of troops committing numerous war crimes against the population. Newly paroled confederates returning to Wayne County became Klansmen to combat the “reign of terror” by the black troops. On April 10, 1887 Dixon moved to the Second Baptist Church in Raleigh, North Carolina. His popularity rose quickly, and before long he was offered a position at the Dudley Street Church in Boston, Massachusetts. As his popularity on the pulpit grew, so did his demand as a lecturer.[14] While preaching in Boston, Dixon was asked to give the commencement address at Wake Forest University. Additionally, he was offered a possible honorary doctorate from the university. Dixon himself rejected the offer, but he sang high praises about a relative unknown who Dixon believed deserved the honor, his old friend Woodrow Wilson.[15] A reporter at Wake Forest who heard Dixon's praises of Wilson put a story on the national wire, giving Wilson his first national exposure.[15]

In August 1889, Dixon accepted a post in New York City, despite the fact that his Boston congregation was willing to double his pay if he would stay.[16] In New York, Dixon would preach at new heights, bumping elbows with the likes of John D. Rockefeller and Theodore Roosevelt (who he helped in a campaign for New York Governor).[16] Sometime in the next five years, however, Dixon became disillusioned with the church, and he began to believe that he could no longer belong to any particular denomination. So, in 1895, Dixon resigned from the Baptist ministry, and started preaching at a nondenominational church. He continued preaching there until 1899 when he began to lecture full time.

It was on the lecture circuit that Dixon found his niche. He enjoyed the work tremendously, and he was often hailed as the best lecturer in the nation.[17] He gained an immense following throughout the country, and particularly in the south, where he played up his speeches on the plight of the working man, and the horrors of Reconstruction.[18] It was during such a lecture tour that Dixon attended a theatrical version of Harriet Beecher Stowe's Uncle Tom's Cabin. Dixon could hardly contain his anger and outrage at the play; it is said that he literally "wept at [the play's] misrepresentation of southerners."[19] Dixon vowed that the "true story" of the South should be told. As a direct result of this experience, Dixon wrote his first novel The Leopard's Spots (1902), which employs several characters, including Simon Legree, recycled from Stowe's novel.[17]

Dixon viewed Southern black America with contempt. He and his family had been slaveowners. Later in his life it is possible to view personalized yet softer contradictory statements in his writings regarding African-Americans.

His "Trilogy of Reconstruction" consisted of The Leopard's Spots, The Clansman (1905), and The Traitor (1907). In these best-selling novels, which presented highly imaginative fiction as hard historical fact, Dixon used historical romance to present Negroes as inferior to whites and to glorify the antebellum American South. While he opposed slavery, he believed in racial segregation.[21] Dixon also wrote about the evils of socialism, particularly expressed in his trilogy: The One Woman (1903), Comrades (1909), and The Root of Evil (1911). In 1919, the book Comrades was made into a motion picture titled Bolshevism on Trial. In the play, The Sins of the Father, which was produced in 1910-11, Dixon himself played the leading role. His photoplay, The Birth of a Nation, appeared in 1915. Thomas Dixon's writings are often quoted by White Nationalist organizations today.

Dixon was the author of 22 novels; additionally, he wrote many plays, sermons, and works of nonfiction. He also wrote some film scripts. His writing mostly centered around three major themes: (1) the need for racial purity; (2) the evils of socialism; and (3) the necessity of a stable family with a traditional role for the wife/mother.[22] A common theme found in his novels is violence against white woman, mostly, though not always by a Southern black man. These crimes are almost always avenged through the course of the story, the source of which most likely stems from a belief of Dixon's that his mother was sexually abused as a child.[23] He wrote his last novel, The Flaming Sword, in 1939 and not long after he was crippled by a cerebral hemorrhage.[24] 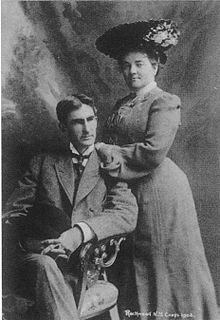 Dixon and his first wife Harriet

Dixon married his first wife Harriet Bussey on 3 March 1886. His wife and he were forced to elope to Montgomery, Alabama, after Bussey's father refused to give his consent.[25] Dixon and Harriet Bussey had three children together: Thomas III, Louise, and Gordon. Following a career of major ups and downs that saw Dixon earn and lose millions, Dixon ended his career as a court clerk in Raleigh, North Carolina.[26] Harriet died on 29 December 1937. Fourteen months later, on 26 February 1939 Dixon suffered a crippling cerebral hemorrhage.[27] Less than a month later, from his hospital bed, Dixon married Madelyn Donovan, an actress who had played a role in a film adaptation of one of his novels.[27] Dixon is buried with his second wife Madelyn in Sunset Cemetery in Shelby, North Carolina. His gravestone reads: "Thomas Dixon Jr. 1864-1946 Lawyer-Minister-Author-Orator-Playwright-Actor A Native of Cleveland County and Most Distinguished Son of His Generation. -- He was the author of 28 books dealing with the reconstruction period. The most popular of which were 'The Clansman' and 'The Leopard's Spots,' from which 'The Birth of a Nation' was dramatized. -- His Wife Madelyn Donovan 1894-1975."[28]

His brother, the popular preacher Amzi Clarence Dixon, was famous for helping to edit The Fundamentals, a series of articles (and later volumes) influential in fundamentalist Christianity.

According to Glenda Elizabeth Gilmore's Gender and Jim Crow, a possible source of Dixon's hatred for blacks and black/white sexual relationships may lie in his father's affair with the family's black cook, which resulted in a son. Dixon's half-brother, who lived in New York, spoke often of his famous relative, despite being dismissed by Dixon as "that darky [who] is always getting...into trouble" (Gilmore, pp. 66–70).