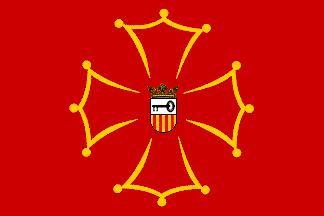 province = Lleida
capital =
largest_city =
demonym = aranès ("m.") aranesa ("f.")
population = 7130 (1996)
area = 620.5
pop_density = 11.5
municipalities = ||||||||The Aran Valley ( _oc. Era Val d'Aran; _ca. la Vall d'Aran; _es. El Valle de Arán) is a small valley (620.47 km²) in the mountains and a comarca (county) in the northwestern part of (). The River passes through the Val d'Aran after rising on the slopes of nearby Pic Aneto and passing underground at the Trou de Toro. It then reappears in the Val dera Artiga as a resurgence and flows into the Val d'Aran which is one of the highest valleys of the Pyrenees. Most of the valley constitutes the only part of Catalonia on the north face of the Pyrenees, hence the only part of Catalonia whose waters drain into the . The region is characterized by an Atlantic climate, due to its peculiar orientation, which is different from other valleys in the area.

The Val d'Aran borders on the north, Aragón to the west and the Catalan comarques of to the south and to the east. The capital of the comarca is , with 3,692 inhabitants (1996). The entire population of the valley is about 7,130 (1996). The chief river is the Garona, which descends through to the Atlantic. The , with its head only a hundred meters from that of the Garona, flows the other way, toward the .

The valley used to be without direct communication with the south side of the mountains during winter, until the construction of the Vielha , opened in 1948. Spanish Republican guerrillas (supporters of the , the losing side in the ) controlled the area from the end of until the opening of the tunnel.

The local language and the name "Val d'Aran"

is the standardized form of the variety of the .The name Val d'Aran is Aranese. "Val d'Aran" itself is a , as it means "Valley of the Valley" ("val" in Gascon and "aran" from Basque "haran"), a combination that reflects its unique geography.

Maps and road signs in Spain use the name "era Val d'Aran" to refer to the valley, where "era" is the Aranese singular feminine article as a part of the name. The same practice goes for all towns and other locations in Aran, for example Aranese spelling Vielha is used instead of Catalan and Spanish "Viella" to refer to the capital of Val d'Aran.

Aranese has been regularly taught at school since 1984. Like several other s in Europe that recently faced decline, Aranese is experiencing a renaissance.

The area is divided in six administrative divisions, called "terçons" (meaning "thirds", as the divisions were formerly three in number). The current arrangement of the divisions dates from the 15th century.

The main income is from resorts in the winter, and from in the summer. Other primary sectors of the economy include forest products, cattle raising and apiculture, all of which have become less and less important since the opening of ski resorts.

These population figures are from January 1, 2006 (source: Spanish INE).

Many native animals of the Vall d'Aran are in peril of extinction. There are programs of reintroduction and/or protection for: