The Manitoba general election of September 11, 1990 was held to elect Members of the Legislative Assembly (MLAs) of the Province of Manitoba, Canada. It was won by the Progressive Conservative (PC) Party, which took 30 out of 57 seats. The New Democratic Party finished second with 20, while the Liberal Party fell from 21 to 7. 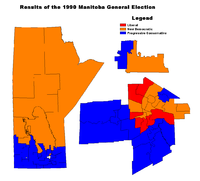 The 1990 election took place against the backdrop of the failed Meech Lake constitutional accord, which sought to clarify Quebec's position within Canada. The accord, which was signed in 1988, required passage by the federal government and the ten provincial governments before June 23, 1990 to become law. Although Manitoba Premier Howard Pawley had approved the accord in 1987, his government did not bring it before the legislature before their surprise defeat in 1988.

Pawley's replacement, PC leader Gary Filmon, was less inclined to support the deal, and requested that certain aspects be re-negotiated before his government would grant approval. After some reluctance, Prime Minister Brian Mulroney allowed re-negotiations with all provincial Premiers, and convinced Filmon to introduce the accord to the Manitoba legislature shortly before the scheduled deadline. Liberal leader Sharon Carstairs and NDP leader Gary Doer were also willing to support the revised deal.

Some members of Doer's caucus still opposed the accord, however. When it was put before the legislature, NDP MLA Elijah Harper refused to grant unanimous leave for emergency debate, on the grounds that the deal did not recognize the position of aboriginals in Canada's constitutional framework. Harper, the first Treaty Indian to serve in the Manitoba legislature, was strongly supported by aboriginal leaders such as Phil Fontaine and Ovide Mercredi, and continued his protest in the legislature during the following weeks. With assistance from former parliamentary clerk Gord Mackintosh, Harper was able to delay the legislative process until the accord simply could not be passed on time. Harper became a national celebrity, and polls showed that most English-speaking Canadians supported his stand.

Ironically, Gary Filmon's Tories may have benefitted from Harper's actions. Filmon was a long-time opponent of the accord, and was a fairly tepid supporter even after the renegotiated compromise was reached. Subsequently, Filmon used the accord's failure to highlight differences between himself and Mulroney, who was becoming increasingly unpopular as Prime Minister.

Filmon's Progressive Conservatives made the fewest promises of any major party. Their platform called for an end to abuse of the elderly in retirement homes, environmental initiatives, and low-cost economic development. They proposed to cut the size of the Winnipeg City Council, and vowed not to raise taxes.

The Liberals focused on economic issues, promising a major investment in job training, research and development, and business support. They also proposed to cut the Winnipeg Council, create government grants for tourism and adult education, and restore Tory cuts to health and other programs.

The NDP platform focused on workers' concerns, the environment, preventative health programs and housing. They supported an increase in the minimum wage, affirmative actions programs, and laws which would make it expensive to shut down plants in Manitoba. The also promised not to raise taxes, and opposed the safe of Manfor Ltd., a Crown corporation owned by the Province of Manitoba.

The small Progressive Party opposed affirmative action and the proposal to recognize in the Canadian constitution the Province of Quebec as a "distinct society" within Canada.

A poll published in the Winnipeg Free Press indicated that the NDP were the most trusted party on economic issues, followed by the Tories. The NDP were still damaged from their poor showing in the 1988 election, however, and began the campaign in third place. The struggle for government initially appeared to be between the Liberals and Progressive Conservatives.

The Liberals ran a weak campaign, however, and were overtaken by the NDP after a strong performance from Gary Doer in the leaders' debate. Doer further increased the NDP's standing in the last weeks of the campaign by highlighting the connections between Filmon and the Mulroney government on a number of issues. The NDP's return to official opposition status was regarded as a major development after their near-collapse in 1988.

The Tories continued their dominance in Manitoba's rural south, winning every seat in the region. They also won 13 of 31 seats in Winnipeg and a few ridings to the city's immediate north, enough to provide the party with a majority government.

The NDP won 11 seats in Winnipeg, and swept the province's north. They also won four seats in the mid-northern region, and retained Brandon East, their lone southern riding outside of Winnipeg.

All seven seats won by the Liberals were in Winnipeg, mostly in the centre and northwest of the city.

1 "Before" refers to standings in the Legislature at dissolution, and not to the results of the previous election. These numbers therefore reflect changes in party standings as a result of by-elections and members crossing the floor.

River Heights (Sharon Carstairs appointed to the Senate of Canada,