Gameplay is largely unchanged from other Dance Revolution games. However, the game features additional modes taking advantage of the hardware of the Wii. The game allows the integration of the Wii Remote into gameplay, where steps can be replaced by markers requiring a hand motion with the remote. Other step types include steps which must be hit twice. 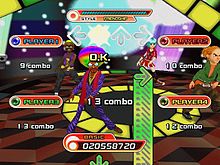 In Friendship Mode, the highest step judgement is counted for all players

The soundtrack of Dance Dance Revolution Hottest Party differs in the Japanese release. "B4U (The Acolyte Mix)", "Gonna Make You Sweat (Everybody Dance Now)", "Rhythm is a Dancer" and "Unappreciated" are only featured in the North American and European/Oceanic release. "B4U (Rising Sun Mix)", "Double Tornard", "Pluto the First" and "True♥Love (Clubstar's True Club Mix)" are included in their place. "Lessons by DJ" in the Japanese release has Japanese language voice overs during the song, whereas all other releases have English voice overs.

The game has received generally mixed reviews. Many reviews agree the hand motions freshen the DDR experience and are a positive addition to the game.[10]