Lieutenant General Pedro Augusto del Valle (August 28, 1893 – April 28, 1978) was a United States Marine Corps officer who became the first Hispanic to reach the rank of Lieutenant General. His military career included service in World War I, Haiti and Nicaragua during the Banana Wars of the 1920s, in the seizure of Guadalcanal, and later as Commanding General of the 1st Marine Division during World War II.

Del Valle was born on August 28, 1893 in San Juan, Puerto Rico when the island was still under Spanish colonial rule. He was related to Dr. Francisco del Valle, a surgeon who had served as mayor of San Juan from 1907 to 1910. In 1900, two years after the Spanish–American War, the del Valle family moved to Maryland where they became U.S. citizens (The Jones Act of 1917 later gave United States Citizenship to all Puerto Ricans born on the island).[1] He received his primary and secondary education in Maryland.

On June 17, 1911, after he graduated from high school, del Valle received an appointment by George Radcliffe Colton, who served from 1909 to 1913 as the U.S. appointed governor of Puerto Rico, to attend the U.S. Naval Academy in Annapolis, Maryland. Del Valle graduated from the academy in June 1915 and was commissioned a second lieutenant of the Marine Corps on June 5, 1915.[1][2][3]

Pedro del Valle as a Midshipman

Pedro del Valle helped the Marine Corps in the capture of Santo Domingo, Dominican Republic, in 1916, for which he was awarded his first Legion of Merit. Del Valle commanded the Marine detachment on board the USS Texas (BB-35) in the North Atlantic during World War I. In 1919, he participated in the surrender of the German High Seas Fleet.[1] Later he served as "Aide-de-camp" to Major General Joseph Henry Pendleton after serving on a tour of sea duty aboard the USS Wyoming (BB-32). His job included an inspection tour of the West Indies in the company of General Pendleton.[1]

In 1926, del Valle served with the Gendarmerie of Haiti for three years and, during that time, he also became active in the war against Augusto César Sandino in Nicaragua. In 1929, he returned to the United States and attended the Field Officers Course at the Marine Corps School in MCB Quantico, Virginia.[1]

In 1931, Brigadier General Randolph C. Berkeley appointed del Valle to the "Landing Operations Text Board" in Quantico, the first organizational step taken by the Marines to develop a working doctrine for amphibious assault. In 1932, he wrote an essay titled "Ship-to-Shore in Amphibious Operations" which was published in the Marine Corps Gazette. In his essay, he stressed the importance of a coordinated amphibious assault and of an execution of an opposed landing.[4]

He worked as an intelligence officer in Havana, Cuba in 1933 under Admiral Charles Freeman, following the Cuban Sergeant's Revolt. From 1935–1937, del Valle was Assistant Naval Attache, attached to the American Embassy to Italy in Rome.[1] While on duty, del Valle participated as an observer with the Italian Forces during the Second Italo-Abyssinian War. The experiences which del Valle gained as an observer led him to author the book "Roman Eagles Over Ethiopia" where he describes the events leading up to the Italian expedition and the complete movements of combat operations by the Italian Army under Generals De Bono, Badoglio, and Graziani.[5] In 1939, he was ordered to attend the Army War College in Washington, D.C. and after graduating was named Executive Officer of the Division of Plans and Policies, USMC.[1][5] 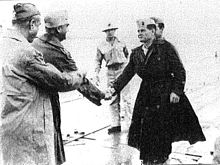 On March 1941, del Valle became the commanding officer of the 11th Marine Regiment, (artillery). Upon the outbreak of World War II, del Valle led his regiment and participated in the Guadalcanal Campaign, providing artillery support for the 1st Marine Division. In the Battle of the Tenaru, the fire power provided by del Valle's artillery units killed many assaulting Japanese soldiers before they ever reached the Marine positions. The attackers were killed almost to the last man.[4] The outcome of the battle was so stunning that the Japanese commander, Colonel Kiyonao Ichiki, committed seppuku shortly afterwards.[6] Major General Alexander Vandegrift, impressed with del Valle's leadership recommended his promotion and on October 1, 1942, del Valle became a brigadier general. Vandegrift retained del Valle as head of the 11th Marines, the only time that the regiment has ever had a general as their commanding officer.[4] In 1943, he served as Commander of Marine Forces overseeing Guadalcanal, Tulagi, and the Russell and Florida Islands. 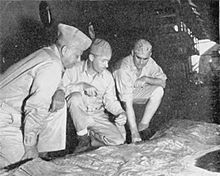 On April 1, 1944, del Valle, as Commanding General of the Third Corps Artillery, III Marine Amphibious Corps, took part in the Battle of Guam and was awarded an award star in lieu of a second Legion of Merit. The men under his command did such a good job with their heavy artillery that no one man could be singled out for commendation. Instead, each man was given a letter of commendation by del Valle which was carried in their record books.[7]

In late October 1944, he succeeded Major General William H. Rupertus as Commanding General of the 1st Marine Division, being personally greeted in his new command by Colonel Lewis Burwell "Chesty" Puller. At the time, the 1st Marine Division was training on the island of Pavuvu for the invasion of Okinawa. On May 29, 1945, del Valle participated in one of the most important events which led to victory in Okinawa.[8] After five weeks of fighting, del Valle ordered Company A of the 1st Battalion 5th Marines to capture Shuri Castle, a medieval fortress of the ancient Ryūkyūan kings. Seizure of Shuri Castle represented a moral blow for the Japanese and was an undeniable milestone in the Okinawa campaign.[4] The fighting in Okinawa would continue for 24 more days. Del Valle was awarded a Distinguished Service Medal for his leadership during the battle and the subsequent occupation and reorganization of Okinawa.[4]

After World War II ended, del Valle was ordered back to Headquarters Marine Corps, where he was named Inspector General, a position which he held until he retired on January 1, 1948. On February 19, 1946 New Mexico Senator Dennis Chavez and del Valle held a meeting with President Harry S. Truman in the White House, in which Chavez recommended del Valle for the position of governor of Puerto Rico.[9] From 1898 to 1942, the governors of the island were officials appointed by the President of the United States. Local Puerto Rican politicians, such as Luis Muñoz Marín, opposed the naming of del Valle in favor of Jesús T. Piñero; to which Del Valle eventually asked President Truman to withdraw his name among those considered for the position. The first civilian and native Puerto Rican appointed governor of Puerto Rico thus became Piñero in 1942. If Congress had not approved legislation in 1947 allowing Puerto Ricans to elect their own Governor, del Valle may have been appointed to the governorship.[10]

After retiring from the Marine Corps, del Valle worked as a representative of ITT in the company's office in Cairo, Egypt. After some time with the company he was named president of ITT for all South America in Buenos Aires, Argentina, a position that he held until 1951.

Believing that the United States was in danger of a communist threat, del Valle tried to convince the Central Intelligence Agency and Department of Defense to form a vigilante minuteman group. He also believed that the CIA should operate behind Russian and Chinese lines. After his ideas were turned down, he decided to form his own group. In 1953, del Valle met with LtCol John H. Hoffman, LtCol Eugene Cowles Poneroy, Brigadier General Bonner Fellers, and Major General Claire Chennault (USAF) to formed the "Defenders of the American Constitution" (DAC). DAC's main goal was to purge the United States of any communist influence. The idea behind the group was to organize the citizens in each state as vigilantes against sabotage and other forms of treason, then link them up in some national headquarters.[11] Del Valle ran for governor of Maryland in 1953 and was defeated in his attempt to be nominated in the Republican primary election. The controversial views shared by some of the members of "DAC" was to blame for the organization's decline in popularity.[11] On April 12, 1961, del Valle invoked The Protocols of the Elders of Zion during a speech before the United States Daughters of 1812, in an attempt to prove that Communism and Socialism were introduced to Russia by an "Invisible Government" whose intention was to destroy that country. Del valle also belonged to a group known as the Sons of Liberty, established in 1967 in Annapolis, Maryland and named after the secret patriotic society which directed the actions of the Boston Tea Party on December 13, 1773.[12]

Lieutenant General Pedro del Valle, who was married to Katharine Nelson (1890–1983), died on April 28, 1978 in Annapolis, Maryland. He was buried in the United States Naval Academy Cemetery and Columbarium. After del Valle’s death at age 85, the DAC ceased to exist.[13]

Among Lieutenant General Pedro del Valle's decorations and medals were the following:

He was awarded the Distinguished Service Medal for outstanding leadership as Commanding General of the First Marine Division, during the attack and occupation of Okinawa from April 1, to July 21, 1945. His citation reads in part:

Undaunted by the deadly accuracy of enemy gunfire, he repeatedly visited the fighting fronts, maintaining close tactical control of operations and rallying his weary but stouthearted Marines to heroic efforts during critical phases of this long and arduous campaign. By his superb generalship....Major General del Valle contributed essentially to the conquest of this fiercely defended outpost of the Japanese Empire.[1]