Luigi's Mansion, known as Luigi Mansion (ルイージマンション, Ruīji Manshon?) in Japan, is an action-adventure game published by Nintendo for the Nintendo GameCube. It was released in Japan on September 14, 2001, in North America on November 18, 2001, and in Europe on May 3, 2002. The game was a launch title for the GameCube. This is one of the few games in the Mario series where Luigi is the main protagonist, instead of Mario.

The game takes place in a haunted mansion when Luigi wins a contest that he never entered. He told his brother to meet him there to celebrate his victory. Luigi is searching for his brother Mario, who came to the mansion earlier, but went missing. To help Luigi on his quest, an old professor named Elvin Gadd has equipped him with the "Poltergust 3000", a vacuum cleaner used for capturing ghosts, and a "Game Boy Horror", a device used for communicating with Gadd. He also uses it as a map and to examine ghosts.

Luigi's Mansion was relatively well-received by reviewers, despite being criticized for its short length. The game has sold over 2.5 million copies, and is the fifth best-selling Nintendo GameCube game in the United States. It was one of the first games to be re-released as a Player's Choice title on the system. A sequel, Luigi's Mansion 2, was announced for the Nintendo 3DS handheld system on June 7, 2011 at E3. 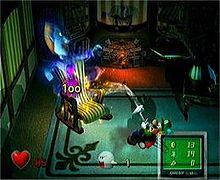 In Luigi's Mansion, Professor E. Gadd (derived from the interjection "Egad!" which may be exclaimed when a person has just been frightened) arms Luigi with two of his inventions: the Poltergust 3000 (a parody of the Proton pack) and the Game Boy Horror. The Poltergust 3000 is a high-powered vacuum cleaner designed for capturing ghosts (à la Ghostbusters) and to gather treasure. To capture ghosts, the player must first shine Luigi's flashlight at them and stun them. This makes them show their heart, and gives Luigi a chance to suck them up into the Poltergust 3000, steadily reducing the ghosts' hit points to zero, at which point they can be captured.[1] The ghosts remain in the Poltergust 3000, although certain more advanced ghosts, named "Portrait Ghosts", are extracted and put back into their portraits after a process at the end of the game's four areas. When these paintings are made, they are stored in the gallery in Professor E. Gadd's laboratory.[2] Later in the game, Luigi locates three medallions which allow him to expel fire, water, or ice from the Poltergust 3000. These elements are needed to capture certain ghosts.[3]

The Game Boy Horror is a portable device that allows Luigi to investigate items in the mansion to find out what they are, and a functionality that indicates if a Boo is in the room and how near Luigi is to it. It also contains a map of the mansion and lets Luigi contact Professor E. Gadd and vice versa. Spread throughout the mansion are dark rooms containing ghosts, and when Luigi clears a room of all its ghosts, the lights come on and a chest usually appears. These chests can either contain keys, money, or element medallions. Whenever Luigi finds a key, his Game Boy Horror automatically indicates which room it will unlock. Its design resembles that of a Game Boy Color.[4]

Once King Boo, the final boss of Luigi's Mansion, is defeated, the player is given a rating based on the amount of treasure Luigi has found. A second version of the mansion also becomes playable, called the "Hidden Mansion". Depending on the version of the game, the entire mansion may be reversed from left to right, bosses may be different, they may move faster, ghosts (including boss ghosts) may be captured faster, and there may be more ghosts.[5]

The game starts when Luigi arrives at a large, dark mansion which is set in the outskirts of a forest. The mansion is haunted by various ghosts, including Boos, and it is being investigated by Professor E. Gadd, who lives in a small workshop next to the mansion.[6] It consists of five floors, including a basement and a roof. The player starts out in a foyer, where he can enter rooms in the various floors.

Luigi's Mansion begins with Luigi having won a mansion in a contest. Despite not having entered any contest, he promptly told Mario about the mansion and the two agreed to meet up outside it that evening. Upon finally arriving at his new mansion, which looks much more sinister than the supplied photo, Mario is nowhere to be found. Luigi proceeds inside the mansion and is soon assaulted by a ghost, only to be saved by a little old man wielding a vacuum cleaner. The old man is however unable to reel the ghost in, and is soon overpowered. After being helped to his feet by Luigi, the old man introduces himself as Professor E. Gadd. The two retreat from the mansion as more ghosts appear.[6]

In E. Gadd's nearby workshop, he mentions how Luigi's newly won mansion is obviously the work of something not of this world, since it only appeared a few nights ago.[7] The mansion itself was built by King Boo, who freed the caught ghosts and built it to shelter them. They sent Luigi the supplied photo to use it as a trap. Gadd also tells Luigi that he saw someone wearing a red cap go into the mansion some time ago, and has not been seen since.[8] Upon learning that the red capped man (Mario) was Luigi's brother, E. Gadd allows Luigi to take over his duties of ghost-catching and entrusts him with his vacuum cleaner; the "Poltergust 3000".[9] After numerous confrontations, Luigi faces off against King Boo in his painting's realm that resembles the roof of the mansion.[10] King Boo, seated within a titanic Bowser mech - which looks perfectly identical to Bowser - is eventually beaten down and sucked into the Poltergust 3000.[11] Luigi returns to Gadd with Mario, who has been sealed within a portrait by King Boo, and successfully breaks the seal to save his brother.[12] The end also sees the haunted mansion disappear. Luigi builds a normal house on the site using the money he earned. The size of the house depends on how much money the player was able to obtain before the end of the game.

The game was first revealed at Nintendo Space World 2000 as a technical demo designed to show off the graphical capabilities of the GameCube.[13] The full motion video footage had scenes seen in later trailers and commercials for the game, but never used. This includes Luigi running from an unknown ghost in the foyer, ghosts playing cards in the parlor, and ghosts circling around Luigi, all never to appear in the final release. Soon after its creation, Nintendo decided to make it into a full game. Luigi's Mansion was later shown at the E3 in 2001 with the Nintendo GameCube console.[14] A newer version of the game, more closely related to the final version, was later revealed at Nintendo Space World 2001.[15]

The original plan for Luigi's Mansion involved a game where the levels revolved around a large mansion or complex. Tests were later done with Mario characters in dollhouses and such. Once it was put as a GameCube project, Luigi was selected as the main character to keep the game original and new. The other gameplay ideas, such as ghosts and the ghost-sucking vacuum cleaner, were added later. Older concepts, such as a role-playing game-like system which made real-time changes to rooms and an underground cave area located under the mansion, were also scrapped with the inclusion of the new ideas.[16]

Luigi's Mansion's music was composed by Shinobu Tanaka and Kazumi Totaka,[17] and as such contains "Totaka's Song", a song featured in almost every game that Totaka has composed.[18] It is found by waiting on the controller configuration screen at the Training Room for about three and a half minutes.[19] The main theme of Luigi's Mansion is orchestrated and arranged by Shogo Sakai for Super Smash Bros. Brawl.[20] The game featured voice actors Charles Martinet as the voice of Mario and Luigi, and Jen Taylor as the voice of Toad.[21] Luigi's Mansion received an award for its audio by BAFTA Interactive Entertainment Awards in 2002.[22]

All Nintendo GameCube systems support the display of stereoscopic 3D, and Luigi's Mansion was developed to utilise this.[23] 3D televisions were not widespread at the time, and it was deemed that compatible displays would be too cost-prohibitive for the consumer. As a result, the feature was never enabled outside of development.[24]

Luigi's Mansion is the most successful GameCube launch title, being the best-selling game of November 2001.[34] The game has sold over 348,000 copies in Japan,[35] and 2.19 million copies in the United States,[36] making it the first best-selling Nintendo GameCube game in the United States.[36] It was also one of the first Player's Choice titles of the console, along with Super Smash Bros. Melee and Pikmin.[37]

Luigi's Mansion received generally positive reviews, and reviewers praised the game's graphics, design, and gameplay. GameSpot stated that Luigi's Mansion "features some refreshing ideas" and "flashes of brilliance."[31] The gaming magazine Nintendo Power praised the game for being "very enjoyable while it lasts, with its clever puzzles and innovative game play."[33] GameSpy said that the game features "great visuals, imaginative game design and some classic Nintendo magic."[38] The game was referred to as "a masterful example of game design" by GamePro.[39] Game Revolution stated that "the graphics are quite beautiful and the interesting game mechanics are enjoyable."[40] The American-based publication Game Informer praised the gameplay, and referred to it as "brilliant and up to par with Miyamoto's best."[30] The audio was praised by IGN, who considered Luigi's voice acting as "cute, humorous and satisfying",[32] and GameSpy, who declared that the soundtrack remains "subtle, amusing and totally suitable throughout the game".[38] The Japanese video game publication Famitsu awarded the game with a gold rating, and noted that the control system, while tricky at first, works well.[29]

The game has also received criticism, mainly because of the game's length. GameSpot said that Luigi's Mansion "fails to match the classic status of Mario's adventures" and that the "short amount of time it takes to complete it makes it a hard recommendation." The review, however, also considered that the short length prevents the gameplay and audio from getting tiresome.[31] GameSpy criticized the game's lack in longevity, and they said that the game could be beaten in about six hours.[38] Allgame declared that Luigi's Mansion "ultimately fails to deliver a cohesive gameplay experience over the long-term."[27] Fran Mirabella III of IGN felt that the game was subpar, due to its "predictable, formulaic gameplay".[32] G4's TV show X-Play criticized Luigi's Mansion in their special on Mario games and media, calling the game a letdown for players waiting for the first Mario game on the GameCube.[41] The game placed 99th in Official Nintendo Magazine's 100 greatest Nintendo games of all time[42] UGO listed Luigi's Mansion on their list of the "Top 50 Games That Belong On the 3DS", stating "Recreating this experience on the 3DS in 3D would breathe new life into the ghosts haunting Luigi's prize mansion."[43] It was later announced at Nintendo's E3 2011 conference that a sequel entitled "Luigi's Mansion 2" will be produced exclusively for the 3DS.

Luigi's Mansion 2 was confirmed at the E3 in 2011 for the Nintendo 3DS and will be released in the first quarter of 2012.