The Oregon City Bridge is a steel through arch bridge spanning the Willamette River between Oregon City and West Linn, Oregon, United States. It was built and is owned by the Oregon Department of Transportation as part of Oregon Route 43 and is the third southernmost Willamette bridge in the Portland metropolitan area, after the Boone Bridge in Wilsonville and the Oregon 219 bridge near Newberg.

The bridge is 745 ft (227 m) in length and 28 ft (8½ m) wide with a 360 ft (110 m) long main span that provides 49 ft (15 m) of vertical clearance at low river levels. The narrow width causes problems for the two bus lines and other large vehicles that cross it, often requiring traffic going in the other direction to stop. This bridge is the only Oregon bridge to be encased in gunite, which protects it from corrosive sulfur dioxide emissions from paper mills south of the bridge. The concrete look was favored by bridge designer Conde McCullough, designer of 500 Oregon bridges. His signature detailing is evident in the obelisk pylons with sconced light fixtures, ornate railings, and Art Deco piers.[1] 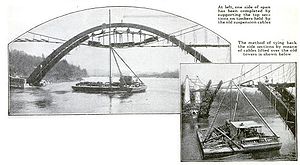 Construction workers using the old suspension bridge to support the arch of the new bridge while under construction. Caption from Popular Science Magazine, November 1922

The bridge was built to replace an 1888 pedestrian suspension bridge; workers used the old bridge to begin construction of the present bridge's box steel ribs.[2] Construction was made difficult by the great depth of the river at the bridge site and by the water traffic during construction. Construction workers used the cables of the old bridge to support the arch prior to completion by running cables from the arch, over the cables to an anchor on the far side. Once the new arch was completed, the old suspension bridge was dismantled.[3] The present bridge was opened for public use on 28 December 1922; the cost of construction was published as $300,000.[4]

The piers were designed to accommodate public restrooms: decks widen at the piers to provide room for the stairways that descend to the restrooms. Repeated vandalism led to the closure of the restrooms in 1937.

The bridge was added to the National Register of Historic Places (as the Willamette River (Oregon City) Bridge (No. 357)) on 1 July 2005.[5]

As of 2000 the bridge carried 12,800 vehicles per day, which represents only a 40% growth in traffic since 1953, when a public debate was held about building a parallel bridge next to the existing bridge. While the Oregon City Bridge did not get twinned, the Abernethy Bridge opened in 1970 and has since become the major route through the area.

In January 2010 the ODOT took the Oregon City Bridge out of service for a two-year rehabilitation process. Cross-river traffic has been detoured to the Abernathy Bridge; foot traffic can use the ODOT shuttle service.[6]