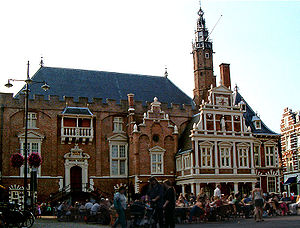 City Hall of Haarlem on the Grote Markt. It was built in the 14th century replacing the Count's castle.

The City Hall in Haarlem is the seat of the city's government.

City Hall of Haarlem, detail from 1460 painting by the Master of Bellaert. 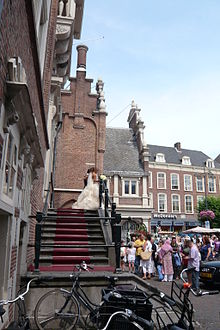 The city hall is traditionally the place where residents have their civic wedding ceremony.

Around 1100 a wooden building was constructed on the location of the current Gravenzaal of the City Hall. Traces of this building were found in 1955.

After large fires in 1347 and 1351, William II, Count of Holland donated the remains of the Gravenzaal to the city's municipality. A new building was built there. The central square building dates from the Middle Ages, but the distinctive façade of the building was designed by architect Lieven de Key and built from 1602-1604. The way it originally looked can be seen in a painting from 1460 by the Master of Bellaert. Originally the city hall was just the front of the building, and the rear cloister belonged to the Dominican brotherhood. After the Protestant Reformation this came into the possession of the city council and it is now a large complex with offices and meeting rooms. Both the Frans Hals Museum and the Haarlem Public Library originally were located in the city hall.

Every Saturday and Monday there is a big market in front of the City Hall, where on Saturdays mainly flowers, household goods, and food is sold, and on Mondays mainly cloth, and clothing. Although the market is frequented by the local population, it is a truly touristic attraction and worth a visit, if only to try the raw herring from the fish stand, or stroop wafels from the stroop wafel stand.

A large number of paintings and objects from Haarlem's rich history can be found inside the building. One series of paintings depict the various counts of Holland, starting from Dirk I to Maximilian from Austria. In the Middle Ages these paintings were hanging in the Carmelieten Cloister in Haarlem; they were painted between 1486 and 1491. In 1570 it is mentioned in city archives that the paintings were hanging in the City Hall; possibly they were moved there in 1566 to protect them from the iconoclastic riots. Other paintings and objects are either part of the original interior, or too big to fit in the Frans Hals Museum.