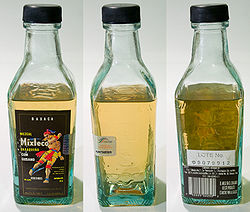 Bottle of mezcal with worm.

Mezcal, or mescal, is a distilled alcoholic beverage made from the maguey plant (a form of agave, Agave americana) native to Mexico. The word mezcal comes from Nahuatl metl and ixcalli which mean 'oven cooked agave.'[1]

The maguey grows in many parts of Mexico, though most mezcal is made in Oaxaca.[2] There is a saying attributed to Oaxaca regarding the drink: "para todo mal, mezcal, y para todo bien también" (for everything bad, mezcal, and for everything good, too.)[3][4]

It is unclear whether distilled drinks were produced in Mexico before the Spanish Conquest.[5] The Spaniards were introduced to native fermented drinks such as pulque, also made from the maguey plant. Soon the conquistadors began experimenting with the maguey plant to find a way to make a distillable fermented mash. The result was mezcal.[6]

Today, mezcal is still made from the heart of the maguey plant, called the "piña," much the same way it was 200 years ago, in most places.[3][7] In Mexico, mezcal is generally imbibed straight and has a strong smoky flavor.[7] Though not as popular as tequila (a mescal made specifically from the blue agave in select regions of the country), Mexico does export the product, mostly to Japan and the United States, and exports are growing.[8]

Despite the similar name, mezcal does not contain mescaline or other psychedelic substances.[9] 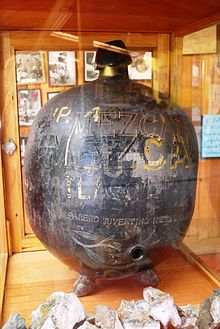 A cantaro jar for serving mezcal made from barro negro pottery.

The maguey was one of the most sacred plants in pre-Hispanic Mexico, and had a privileged position in religious rituals, mythology and the economy. Cooking of the “piña” or heart of the maguey and fermenting its juice was known. The origin of this drink has a myth. It is said that a lightning bolt struck an agave plant, cooking and opening it, releasing its juice. For this reason, the liquid is called the “elixir of the gods.”[10] However, it is not certain whether the native peoples of Mexico had any distilled liquors prior to the Spanish Conquest.[5]

Upon introduction, these liquors were called aguardiente (literally fire or fiery water). The Spanish had known distillation processes since the eighth century and had been used to drinking hard liquor. They brought a supply with them from Europe, but when this ran out, they began to look for a substitute. They had been introduced to pulque and other drinks based on the agave or maguey plant, so they began experimenting to find a way to make a product with a higher alcohol content. The result is mezcal.[6]

Sugar cane and grapes, key ingredients for beverage alcohol, were two of the earliest crops introduced into the New World but their use as source stocks for distillation was opposed by the Spanish Crown, fearing unrest from producers at home. Still requiring a source of tax revenue, alcohol manufactured from local raw materials such as maguey was encouraged instead.[6]

The drinking of alcoholic beverages such as pulque was strongly restricted in the pre-Hispanic period. Taboos against drinking to excess fell away after the Conquest, resulting in problems with public drunkenness and disorder. This conflicted with the government’s need for the tax revenue generated by sales, leading to long intervals promoting manufacturing and consumption, punctuated by brief periods of severe restrictions and outright prohibition.[6]

Travelers during the colonial period of Mexico frequently mention mezcal, usually with an admonition as to its potency. Alexander von Humboldt mentions it in his Political Treatise on the Kingdom of New Spain (1803), noting that a very strong version of mezcal was being manufactured clandestinely in the districts of Valladolid (Morelia), Mexico State, Durango and Nuevo León. He mistakenly observed that mezcal was obtained by distilling pulque, contributing to its myth and mystique. Spanish authorities, on the other hand, treated pulque and mezcal as separate products for regulatory purposes.[6]

The mezcal agave or maguey

The agave or maguey plant is part of the Agavaceae family, which has more than 120 subspecies.[2] The mezcal maguey has very large, thick leaves with points at the ends. When it is mature, it forms a “piña” or heart in the center from which juice is extracted to convert into mezcal. It takes seven years for the plant to mature.[11]

Reportedly, the maguey variety known as “manso” is best for the production of mezcal in Oaxaca. Other varieties used include the “espadín,” the “arroquense” and the “tobalá.” The first two are completely cultivated species but the third is of wild origins.[11] Agave/maguey fields are a common sight in the semi-desert areas of Oaxaca state and other parts of Mexico.[10]

Gusano de Maguey in a bottle, waiting to be added to finished bottles of Mezcal.

Traditionally, mezcal is handcrafted by small-scale producers.[3] A village can contain dozens of production houses, called fábricas or palenques,[7] each using methods that have been passed down from generation to generation, some using the same techniques practiced 200 years ago.[12]

The process begins by harvesting the plants, which can weigh forty kilograms each, extracting the piña, or heart, by cutting off the plant’s leaves and roots.[10] The piñas are then cooked for about three days, often in pit ovens, which are earthen mounds over pits of hot rocks. This underground roasting gives mezcal its intense and distinctive smoky flavor.[4][7] These piñas are then crushed and mashed (traditionally by a stone wheel turned by a horse) and then left to ferment in large vats or barrels with water added.[10]

Old recipes for mezcal require two chicken or one turkey breast to be placed in the mash during fermentation for flavor. Other recipes call for a capon. Today, variations that flavor the mash with cinnamon, pineapple slices, red bananas and sugar still exist, each imparting a particular character to the mezcal.[11] The mash is allowed to ferment, the resulting liquid collected and distilled in either clay or copper pots which will further modify the flavor of the final product. [7] The distilled product is left to age in barrels for between one month and four years, but some can be aged for as long as twelve years.[2][10] Mezcal can reach an alcohol content of 55%.[2]

Mezcal is not as smooth as tequila, as it is generally distilled only once while tequila is distilled twice.[4][6] Mezcal is highly varied, depending on the species of agave or maguey used, the fruits and herbs added during fermentation and the distillation process employed, creating sub-types with names such as de gusano, tobalá, pechuga, blanco, minero, cedrón, de alacran, creme de café and more.[4]

There are two types of mezcal, those made of 100% maguey and those mixed with other ingredients, with at least 60% maguey. Both types have four categories. White mezcal is clear and hardly aged. Dorado (golden) is not aged but a coloring agent is added. This is more often done with a mixed mezcal. Reposado or añejado (aged) is placed in wood barrels from two to nine months. This can be done with 100% agave or mixed mezcals. Añejo is aged in barrels for a minimum of twelve months. The best of this type are generally aged from eighteen months to three years. If the añejo is of 100% agave, it is usually aged for about four years.[2]

Mexico has about 330,000 hectares cultivating agave for mezcal, owned by 9,000 producers.[8] Over six million liters are produced in Mexico annually, with more than 150 brand names.[13]

The industry generates about 29,000 jobs directly and indirectly. Certified production amounts to more than 2 million liters; 434,000 liters are exported, generating 21 million dollars in income. To truly be called mezcal, the liquor must come from certain areas. States that have certified mezcal agave growing areas with production facilities are Durango, Guanajuato, Guerrero, Oaxaca, San Luis Potosí, Tamaulipas and Zacatecas. About thirty species of maguey are certified for use in the production of mezcal.[8] Oaxaca has 570 of the 625 mezcal production facilities in Mexico,[13] but some in-demand mezcals come from Guerrero as well.[6] In Tamaulipas, eleven municipalities have received authorization to produce authentic mezcal with the hopes of competing for a piece of both the Mexican national and international markets. The agave used here is agave Americano, agave verde or maguey de la Sierra, which are native to the state.[14]

It is a misconception that some tequilas contain a 'worm' in the bottle. Only certain mezcals, usually from the state of Oaxaca, are ever sold con gusano, and that only began as a marketing gimmick in the 1940s. The worm is actually the larval form of the moth Hypopta agavis that lives on the agave plant. Finding one in the plant during processing indicates an infestation and, correspondingly, a lower quality product. However this misconception continues, and even with all the effort and marketing to represent tequila as a premium—similar to the way cognac is viewed in relation to brandy—there are some opportunist producers for the shooters-and-fun market who blur these boundaries.[15]

Recently[when?] the Caballeros tequila company marketed a mezcal with a scorpion in the bottle instead of the traditional worm. They do not recommend eating the scorpion, but the stingers are removed for those willing to try.[16]

In Mexico, mezcal is generally drunk straight, not mixed in a cocktail.[3][7] There are a couple of rituals associated with it. One is saying "Arriba, abajo, al centro y pa ´dentro", (up, down, center and in) before the first shot.[3] The other involves spilling a small portion onto the ground as an offering to the Mayahuel, the goddess of maguey and the fertility of the earth.[4] While mezcal is generally not mixed with any other liquids, some add salt, or eat lime or orange slices with it.[12]

The most traditional Oaxaca way to drink mezcal is as a shot, with a side plate of fried larvae ground with chili peppers and salt and cut limes. One takes a pinch of the larvae mixture and places it on the tongue, then immediately begins to drink the shot, but slowly. For first-timers, the flavor can be disagreeable, harsh and even cause coughing. It is an acquired taste.[10] Mezcal is popular in the north of Mexico to drink in the morning before breakfast. It is believed that it can help control diseases such as hypertension and diabetes, and is even an aphrodisiac.[14]

In the United States, the reputation of mezcal suffered from its association with college binges on cheap mass-produced bottles sold with the agave larvae at the bottom. It has not become as popular as tequila because of its smoky flavor. A number of bartenders, especially on the West Coast, have been working to make mezcal cocktails, but the liquor’s smoky flavor makes this a challenge. There is one that combines the mezcal with agave nectar, yellow chartreuse, pastis, fresh oregano and lime juice. However, mezcal does not have a signature drink, such as the margarita for tequila.[7]

In the last decade or so, mezcal, especially from Oaxaca, has been exported.[6] Exportation has been on the increase and government agencies have been helping smaller-scale producers obtain the equipment and techniques needed to produce higher quantities and qualities for export. The National Program of Certification of the Quality of Mezcal certifies places of origin for export products. Mezcal is sold in 27 countries on three continents. The two countries that import the most are the United States and Japan.[8] In the United States, a number of entrepreneurs have teamed up with Mexican producers to sell their products in the country, by promoting its handcrafted quality, as well as the Oaxacan culture strongly associated with it.[7]

The state of Oaxaca sponsors the International Mezcal Festival every year in the capital city. Here, locals and tourists can sample and buy a large variety of mezcals made in the state. Mezcals from other states, such as Guerrero, Guanajuato and Zacatecas also participate. This festival was begun in 1997 to accompany the yearly Guelaguetza festival. In 2009, the Festival had over 50,000 visitors, and brought in 4 million pesos to the economy.[17]