Prunus africana, or Red Stinkwood (see the names, below, for more), is an evergreen tree native to the montane regions of Sub-Saharan Africa and the Islands of Madagascar, Sao Tome, Fernando Po and Grande Comore at about 900–3400 m. of altitude. The mature tree is 10–25 m. high, open-branched and often pendulous in forest, shorter and with a round crown of 10–20 m. diameter in grassland. It requires a moist climate, 900–3400 mm annual rainfall, and is moderately frost-tolerant.[2][3][4][5][6][7]

The bark is black to brown, corrugated or fissured and scaly, fissuring in a characteristic rectangular pattern. The leaves are alternate, simple, long (8–20 cm.), elliptic, bluntly or acutely pointed, glabrous and dark green above, pale green below, with mildly serrate margins. A central vein is depressed on top, prominent on the bottom. The 2-cm petiole is pink or red. The flowers are androgynous, 10-20 stamens, insect-pollinated, 3–8 cm., greenish white or buff, and are distributed in 70-mm axillary racemes. The plant flowers October through May. The fruit is red to brown, 7–13 mm., wider than long, two-lobed with a seed in each lobe. It grows in bunches ripening September through November, several months after pollination.

Extrafloral nectaries along the leaf margin.

As with other members of the genus Prunus, Prunus africana possesses extrafloral nectaries that provide anti-herbivore insects with a nutrient source in return for protecting the foliage.

The fruit is too bitter to be of interest to man; however, it is a favored food supply for many animals, who spread the seeds. Dian Fossey reports of the Mountain Gorilla:[8] "The northwestern slopes of Visoke offered several ridges of Pygeum africanum .... The fruits of this tree are highly favored by gorillas." East African Mammals reports that stands of Pygeum are the habitat of the rare Carruther's Mountain Squirrel and asserts that "This forest type tends to have a rather broken canopy with many trees smothered in climbers and dense tangles of undergrowth."[9]
It is currently protected under appendix II of CITES.[10] 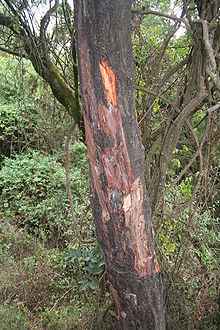 An extract, pygeum, an herbal remedy prepared from the bark of Prunus africana, is used to treat a benign prostatic hyperplasia (BPH)[12] and has shown promise in treating prostate cancer in mice and in vitro.[13] [14] The collection of mature bark for this purpose and for other medical uses has resulted in the species becoming endangered.[15][16] Prunus africana continues to be taken from the wild. Plantecam Medicam deserves credit for attempting sustainable bark harvesting by removing opposing quarters of trunk bark rather than girdling the trees. However, quotas have been awarded by the Forestry Department without adequate forest inventories[17] due to some harvesters, spurred on by the high price per kilogram of bark, removing too much of the bark in an unsustainable manner. In the 1990s it was estimated that 35,000 debarked trees were being processed annually. The growing demand for the bark has led to the cultivation of the tree for its medicinal uses.[5]

The timber is a hardwood employed in the manufacture of axe and hoe handles, utensils, wagons, floors, chopping blocks, carving, bridge decks and furniture. The wood is tough, heavy, straight-grained and pink, with a pungent bitter-almond smell when first cut, turning mahogony and odorless later.[6]

The name of the remedy, pygeum, comes from the name of the plant, which was discovered to botany by Gustav Mann during his now famous first European exploration of the Cameroon Range, with Richard Francis Burton and Alfred Saker, in 1861. A letter from Mann to the Linnean Society of London, read by William Jackson Hooker, then Director of the Royal Botanic Gardens, Kew, on June 5, 1862, describes the naming of the peaks of the Cameroon Range (such as Mount Victoria, later Mount Cameroon[18]) and the collection of specimens there.[19] The latter were shipped back to Kew for classification, which was duly performed by Hooker and his son, Joseph Dalton Hooker, who had the responsibility of publishing them, as William died in 1865.

When the publication came out[20] the Hookers had named the plant Pygeum africanum, followed by the designation "n. sp.", an abbreviation for nova species. The habitat is listed as "Cameroons Mountains, alt. 7000-7500 feet", which was above the tropical forest and in the alpine grasslands. Hooker notes that another specimen had been "gathered in tropical Eastern Africa" at 3000 feet by Dr. Kirk on an expedition of David Livingstone.

The first publication of the synonym in 1864 had been preceded by publication of the bare name in 1863 in a book by Richard Francis Burton.[21] Evidently Hooker had already made the contents of J. Proc. Linn. Soc., Bot. 7 for 1864 available to some, as Burton mentions the volume and Mann's letter in 1863.[22]

Hooker gives scant hint of why he chose "pygeum"; however, what he does say indicates it was common knowledge among botanists. Kirk's specimen fruit was "a much depressed sphere." By this he undoubtedly meant to reference Joseph Gaertner's genus, Pygeum Gaertn.,[23] which innovates pygeum[24] from a Greek word, πυγή, "rump, buttock", because the two lobes of the fruit resemble the human gluteus maximus muscles.[25]

In 1965 Cornelis Kalkman moved Pygeum to Prunus and this classification has the authority for now.[26] However, a recent cladistic study notes of Pygeum: "its relationships to Prunus remain to be tested by molecular cladistics."[27]

Prunus africana also goes by the following common names; Pygeum, Iron Wood, (Red) Stinkwood, African Plum, African Prune, African Cherry, Bitter Almond. In other languages where it grows it is known as; in Amharic 'tikur inchet', in Chagga 'Mkonde-konde', in Kikuyu 'Muiri', in Ganda 'Entasesa'or 'Ngwabuzito', in Xhosa 'uMkakase', in Zulu 'Inyazangoma-elimnyama' and in Afrikaans 'Rooistinkhout'.

A 1994/1995 study published in 1997 by Marchant and Taylor did a pollen analysis on and radiocarbon dated two core samples from montane Mubindi Swamp in Uganda.[28] The swamp is a catchment at 2100 m. altitude between mountain ridges. It is a "moist lower montane forest" in Bwindi Forest National Park. The investigators found that montane Prunus, represented by currently growing Prunus africana, has been in the catchment continuously since their Pollen Zone MB6.1, dated approximately 43000-33000 ybp.