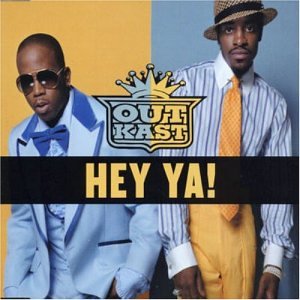 "Hey Ya!" is a hip hop song written and produced by for his 2003 album "The Love Below", part of 's "". The song takes influence from and . A was produced featuring André 3000 as eight different versions of himself, playing on comparisons to by mimicking their 1964 performance on "". The song received praise from contemporary music critics, and it won a for at the .

Along with "", recorded by OutKast's other member , "Hey Ya!" was released by in September 2003 as one of the album's two s (see ). It became a commercial success, reaching the top five of most of the charts it entered, and topping the and the "Billboard" , among others. The song popularized the phrase "shake it like a Polaroid picture" in popular culture, and the used the song to revitalize the public's perception of its products.

Several months later, André 3000 worked with Pete Novak at the Larrabee Sound Studios in . André the lyrics based on a that he had written. They experimented with various s, including singing through a , and did 30 to 40 takes for each line.

"Hey Ya!" is a song in the key of . Each cadential six-measure phrase is constructed using a change of meter on the fourth measure and uses a I–IV–V–VI . G major and chords are played for one and two 4/4 measures respectively. André 3000 then uses a after a 2/4 measure of the dominant chord, leading into two 4/4 measures of an chord (which is not in the key of G major). The song moves at 160 , and André's spans more than an octave and a half, from B3 to G5.

The song opens with three s as André 3000 counts "one, two, three" and then leads into the first verse. The lyrics begin to describe the persona's concerns and doubts about a romantic relationship. He wonders if they are staying together just "for tradition," as in the lines "But does she really wanna [mess around] /But can't stand to see me/Walk out the door?" André 3000 commented, "I think it's more important to be happy than to meet up to…the world's expectations of what a relationship should be. So this is a celebration of how men and women relate to each other in the 2000s."

During the second verse, the persona gets cold feet and wonders what the purpose of continuing the relationship is, pondering the question, "If they say nothing is forever…then what makes love the exception?" After repeating the chorus, the song leads into a call and response section. André 3000 jokes, "What's cooler than being cool?", and the "fellas'" response, an version of his vocals, is "Ice cold", a reference to one of André Benjamin's stage names. [Vernon, Polly. [http://film.guardian.co.uk/interview/interviewpages/0,,1572544,00.html "'I'm addicted to creating'"] . "". September 18, 2005. Retrieved from "" June 4, 2007.] He then calls to the "ladies", whose response is overdubbed from vocals by Rabeka Tuinei, who was an assistant to the .

The song's breakdown coined the phrase "shake it like a Polaroid picture," a reference to an erroneous technique used by some s to expedite . Early versions of the film needed to be dried, and shaking the picture helped it to dry faster. [ [http://www.foxnews.com/story/0,2933,111696,00.html "Don't Shake It Like a Polaroid Picture"] . . February 18, 2004. Retrieved June 3, 2007.] The breakdown also s singer and actress . The song closes by repeating the chorus "" and gradually fading out.

The song performed well in Europe, though not as strong as in the U.S. In the United Kingdom, it debuted at number six on the and peaked at number three after twelve weeks, remaining on the chart for a total of twenty-one weeks. "Hey Ya!" topped the Norwegian singles chart for seven weeks, and it reached the top in for the first week of 2004. It performed well across the continent, reaching the top ten in , , France, Germany, Ireland, and .

The lyric "shake it like a Polaroid picture", along with the song's commercial success, helped to revitalize the . Because current Polaroid film is sealed behind a clear plastic window, casually waving the picture has no effect on the film's development. Vigorously shaking the film may actually distort the image by causing the film to separate prematurely and creating blobs in the final image. [ [http://www.cnn.com/2004/TECH/ptech/02/17/polaroid.warns.reut/index.html "Polaroid warns buyers not to 'shake it'"] . . February 18, 2004. Retrieved from June 3, 2007.] Nevertheless, Polaroid sought to market off of the allusion, hiring Ryan Berger of the advertising agency. [Sanders, Holly M. [http://www.nypost.com/seven/09242006/business/industry_riddles_bind_ad_clan_business_holly_m__sanders.htm "Industry Riddles Bind Ad Clan"] . "". September 24, 2006. Retrieved June 14, 2007.] Polaroid sponsored parties for OutKast, where Euro RSCG distributed Polaroid cameras. [Leonard, Devin. [http://money.cnn.com/magazines/fortune/fortune_archive/2004/06/28/374369/index.htm "Why The Scooters Have Polka Dots Target and others embrace stunts to cut through the clutter."] "Fortune". June 28, 2004. Retrieved June 14, 2007.] OutKast made a deal to hold Polaroid cameras during some of its performances. Polaroid does not release sales figures, but its public image, previously in decline with the growing popularity of s, was bolstered by the song. [Walker, Andrea K. [http://seattletimes.nwsource.com/html/businesstechnology/2001869006_polaroid02.html "Hip-hop, Polaroid form unlikely commercial deal"] . "". 2004. Retrieved from "" June 14, 2007.]

The song's music video, directed by , is based on The Beatles' landmark appearance on "" on February 9, 1964, but sets the action in .

The music video was filmed in two days in August 2003 on a at in Los Angeles, California. The cast consisted of over one hundred girls. Each of André 3000's parts was shot several times from different angles, and he performed the song 23 times during the course of filming. Because releasing "Hey Ya!" as a single was a last minute decision, André did not have time to the parts, and all of the dancing was improvised. Ice Cold 3000's sequences were the first filmed, resulting in the character's energetic performance, and Johnny Vulture's were the last, so André, exhausted from the previous takes, sat on a stool for those sequences.

The music video proved to be a success. The video debuted on 's "" on September 5, 2003 at number ten. [ [http://host17.hrwebservices.net/~atrl/trlarchive/db.html "The TRL Archive - Debuts"] . Popfusion. Retrieved June 3, 2007.] It topped the countdown for nineteen days [ [http://host17.hrwebservices.net/~atrl/trlarchive/no.html "The TRL Archive - Number Ones"] . Popfusion. Retrieved June 3, 2007.] and retired at number eight on November 24, having spent fifty days on the program. [ [http://host17.hrwebservices.net/~atrl/trlarchive/rd.html "The TRL Archive - Hall of Fame"] . Popfusion. Retrieved June 3, 2007.] At the 2004 , the video won four awards for Video of the Year, Best Hip-Hop Video, Best Special Effects, and Best Art Direction. It was also nominated for Best Direction but lost to 's "".

The rock influences of "Hey Ya!" have allowed many other artists to release s of the song. One of the first covers of the song was by indie rock band , who performed the song with the for a session, later releasing their version as a for their single "Vice". In a similar vein, , also on the station, recorded a slower piano version of the song, which became the B-side for his single "Friday's Child". Young's version also appears on the compilation album "". recorded a lounge version of the song for their 2004 album "". Country band , singer , band Pennywise, band , and band have also recorded cover versions.

In 2006, Mat Weddle, frontman of the unsigned folk band , performed an acoustic cover of the song at a local night, and a friend of his posted a video of the performance on . [ [http://www.spin.com/features/heythisisawesome/2006/08/060821_obadiahparker/ "Outkast's 'Hey Ya' Goes Acoustic"] . "Spin". August 21, 2006. Retrieved June 3, 2007.] The video gained popularity on the , soon becoming a , and was viewed by over one million people. [Rodgers, Larry. [http://www.azcentral.com/community/tempe/articles/0328ev-obadiah0328Z10.html "Acoustic trio Obadiah Parker ready for Tempe fest"] . "". March 28, 2007. Retrieved June 3, 2007.] Inspired by band , Weddle's version moves at a much slower tempo backed by a rhythmic guitar and converts the breakdown into a " chime".