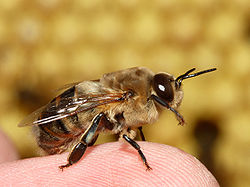 A drone bee. Drone bees are characterized by their larger eyes, larger bodies (though the queen is usually even bigger), and stouter abdomens.

Drones are male honey bees. They develop from eggs that have not been fertilized, and they cannot sting, since the worker bee's stinger is a modified ovipositor (an egg laying organ).

The word 'drone' comes from the Old English 'dran or dræn' meaning 'male honeybee' which probably originated as an onomatopoeia. In the 16th century it was given the figurative sense of 'idler' or 'lazy worker', as male bees make no honey, which is sometimes given as a folk etymology of the word 'drone' itself.

Alongside 'dran', Old English also used the word 'dore' for male bees, but its meaning was broader, as is seen in 'dumbledore', meaning bumblebee. 'Dore' survives in Dutch as 'dar', meaning 'drone'.

Drones carry only one type of allele because they are haploid (containing only one set of chromosomes from the mother). During the queen's egg developing process, a diploid cell with 32 chromosomes divides to generate haploid cells called gametes with 16 chromosomes. The result is a haploid egg, with chromosomes having a new combination of alleles at the various loci. This process is also called arrhenotokous parthenogenesis or simply arrhenotoky.

There is much debate in the scientific literature about the dynamics and apparent benefit of the combined forms of reproduction in honey bees and other social insects, known as the haplodiploid sex-determination system. The drones have two reproductive functions, They convert and extend the queen's single unfertilized egg into about 10 million genetically identical male sperm cells. Secondly, they serve as a vehicle to mate with a new queen to fertilize her eggs. Female worker bees develop from fertilized eggs and are diploid in origin, which means that the sperm from a father provides a second set of 16 chromosomes for a total of 32—one set from each parent. Since all the sperm cells produced by a particular drone are genetically identical, sisters are more closely related than full sisters of other animals where the sperm is not genetically identical.

A laying worker bee will exclusively produce unfertilized eggs, which develop into drones. As an exception to this rule, laying worker bees in some sub-species of honey bees may also produce diploid (and therefore female) fertile offspring in a process called thelytoky. In thelytoky the second set of chromosomes comes not from sperm, but from one of the three polar bodies during anaphase II of meiosis.

In honey bees, the genetics of offspring can best be controlled by artificially inseminating a queen with drones collected from a single hive, where the drones' mother is known. In the natural mating process, a queen mates with multiple drones, which may not come from the same hive. Therefore, in the natural mating process, batches of female offspring will have fathers of different genetic origin.

Drones are characterized by eyes that are twice the size of those of worker bees and queens, and a body size greater than that of worker bees, though usually smaller than the queen bee. Their abdomen is stouter than the abdomen of workers or queen. Although heavy bodied, drones must be able to fly fast enough to accompany the queen in flight.

In the Apis cerana colony there are about 200 drones during high summer peak time.

Drones will die off or are ejected from the hive by the worker bees in late autumn, and do not reappear in the bee hive until late spring.

The drones' main function is to be ready to fertilize a receptive queen. Drones in a hive do not usually mate with a virgin queen of the same hive because they drift from hive to hive. Mating generally takes place in or near drone congregation areas. It is poorly understood how these areas are selected, but they do exist. When a drone mates with its sister, the resultant queen will have a spotty brood pattern (numerous empty cells on a brood frame); again it is not clearly understood whether this is from higher mortality of the larvae, or by removal of these larvae by nurse bees. 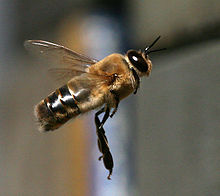 Several drones mate with a non-virgin queen on her mating flights a very small distance away from the hive where she lies in a mating position in front of hive. Mating occurs in flight, which accounts for the need of the drones for better vision, which is provided by their large eyes. Should a drone succeed in mating it will soon die because the penis and associated abdominal tissues are ripped from the drone's body after sexual intercourse.[1]

Honey bee queen breeders may breed drones to be used for artificial insemination or open mating. A queen mating yard must have many drones to be successful.

In areas with severe winters, all drones are driven out of the hive in the autumn. A colony begins to rear drones in spring and drone population reaches its peak coinciding with the swarm season in late spring and early summer. The life expectancy of a drone is about 90 days.

Drones never exhibit typical worker bee behaviours such as nectar and pollen gathering, nursing, or hive construction. Since the worker bee's stinger is a modified ovipositor (an egg laying organ), the drones are defenseless and cannot defend the hive; although if picked up it will sometimes try to frighten the disturber by swinging its tail towards the fingers. Although the drone is highly specialized to one function, mating and continuing the propagation of the hive, it is not completely without side benefit to the hive. All bees, when they sense the hive's temperature deviating from proper limits, either generate heat by shivering, or exhaust heat by moving air with their wings—behaviours which drones do share with worker bees. They will also, in some species, if the nest is disturbed, buzz around the intruder in an attempt to disorient.

Drones fly in abundance in the early afternoon and are known to congregate in drone congregation areas a good distance away from the hive.

Varroa destructor, a parasitic mite, propagates within the brood cell of bees. The varroa mite prefers drone brood as it guarantees a longer development period, which is important for its own propagation success. The number of varroa mites can be kept in check by removing the capped drone brood and either freezing the brood comb or heating it.