Hook is the name of several characters in the . Due to their inability to trademark the name Hook, Hasbro changed the names of all homages of Hook to either Hightower or Wideload. 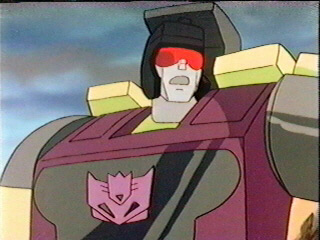 
voiceby = (English) (Japanese)Hook (Glen in Japan, which is an alternare pronouncation of "Crane" in Japanese) is a member of the who transforms into a crane.

With the precision of a fine jeweler, Hook performs his job with skill unequalled among the Transformers, whether reconnecting a damaged microchip or setting a two ton girder into place. He's a snobbish, supercilious, unpopular perfectionist who is able to lift 20 tons. As shoulders and head module, combines with fellow Constructicons to form giant robot "Devastator".

In the episode, "The Secret of Omega Supreme", it is revealed in a flashback that the Constructicons were civilian workers reprogrammed by Megatron's Robo-Smasher device.

Hook debuted with the rest of the Constructicons in the episode, "Heavy Metal War".

Hook was often seen in a leadership role with the Constructicons. It was often confusing to tell who was the leader as Hook and Scrapper seemed to share this role.

Hook seemed to be the Decepticon version of a doctor. In "City of Steel", Megatron called upon Hook to disassemble and reconstruct his parts as weapons.

In episode #34, "Microbots" Hook was also able to install the Heart of Cybertron, a device which powered The Nemesis, into Megatron's systems making him super powerful.

He also repaired an Autobot in the episode, "The Core" while under Chip's mind control device.

Hook and the Constructicons also built monumental structures. The most notable constructions were a solar power tower designed by Autobot Grapple.

*Generation 2 Hook (Orange):Two different redeco's of Hook were released in Generation 2. One was orange.

*Generation 2 Hook (Yellow):Two different redeco's of Hook were released in Generation 2. One was yellow.

Hook is the Japanese name of the Mini-Con known as Longarm in Transformers: Armada.

Glen is the Japanese name for the Transformers: Energon character called Wideload.

caption =
affiliation =Decepticon
subgroup =Constructicons
rank =
function =
partner =
motto =
alternatemodes =Crane
series =
engvoice =
japanvoice =This Hook is an alternate version good of the Generation 1 character from the BotCon exclusive "Shattered Glass" comic, in which the Decepticons are on the side of good and the Autobots on the side of evil. Presumably like all Decepticons of his world, he is heroic and opposed to the evil Autobots. This version of Hook seems to be colored as a homage to the Generation 1 Protectabots, in white with red highlights.

Hook appeared as a member of Megatron's forces in the "Shattered Glass" story. He helped repair Cliffjumper after he was found by the Decepticons.