Cross County Shopping Center, also known as Cross County Center is an open-air shopping mall located in Yonkers, New York, United States. Over 100 stores and restaurants are featured in the mall,[1] including anchor stores Macy's, Old Navy and Sears. The mall is managed by Macerich. 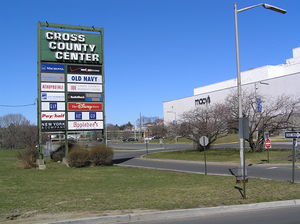 The marquee of the Cross County Shopping Center with Macy's in the background. This marquee is outdated as since this photo was taken, Pay/Half and Disney Store have closed

Cross County Shopping Center opened in 1954[2] as the first mall in Westchester County. The original anchor stores were Gimbels (later Stern's, now Macy's), John Wanamaker (now Sears), and F. W. Woolworth Company. Woolworth operated a main store and a garden store in the mall; the former is now mall space, while the latter was converted to Odd-Job Trading before becoming Old Navy.

The Cross County Shopping Center is undergoing a new development and upgrade, starting in 2008 and scheduled to be completed in 2012.[3]

The huge building that now has Macy's Department Store formerly Stern's and Gimbel's has been enlarged by one third. It also features a new indoor parking lot that is almost as large as the store. The buildings that has the stores on Mall Walk have been renovated and look externally different. The catwalk around some second floor stores has been removed for good. All of the smaller stores that housed cookie stores and Lingerie stores has been demolished. Nearby buildings have been extended. One parking lot now has several large stores. The underground loading complex has also been enlarged.

Adjacent to the CCSC and to its south is a newer small indoor air conditioned mall called The Mall At Cross County which has a variety of stores and restaurants and a large indoor parking garage. While not actually a part of the CCSC, its name is so similar and it is so close, that most local people refer to both as The Cross County Shopping Mall.