The competition was founded in 1902. FC Barcelona have won the cup on the most occasions, with 25 wins.

It has been Spain's football “National Championship″ since 1903,[1] before the foundation of the “Campeonato de Liga″—League Championship—in 1928.

The 1902 competition was won by Club Bizcaya, a team made up of players from Athletic Club and Bilbao FC. The 1902 cup is on display in the Athletic museum,[2] and the club includes the victory in its honours list.

Athletic Bilbao were declared winners in 1904 after their opponents Club Español de Madrid failed to show up. In both 1910 and 1913, there was a split among the clubs and two rival associations, the Unión Española de Clubs de Fútbol and the Federación Española de Fútbol, organised rival competitions, the Copa UECF and the Copa FEF. In 1937, during the Spanish Civil War clubs in the Republican area of Spain entered the Copa de la España Libre, with Levante FC beating their city rivals Valencia CF 1–0 in the final. Although in 2007 the Congress of Deputies urged Royal Spanish Football Federation to recognise it as a Copa del Rey win for Levante FC,[3] the governing body of Spanish football has not made a decision yet.[4] 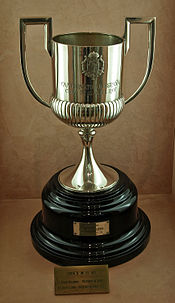 The championship trophy won by FC Barcelona in 1978.

Because of the dispute regarding the 1902 competition the statistics regarding the leading winners are also disputed. FC Barcelona have won the Copa 25 times; Athletic Bilbao are just behind, with either 24 or 23 titles, depending on the source. Throughout the history of the competition there have been 12 actual trophies. Trophies have been permanently awarded to clubs for winning the competition either three times in a row or on five separate occasions and for other special reasons.
Thus, four trophies have been permanently awarded to FC Barcelona, three to Athletic Bilbao and one to Real Madrid CF. Athletic Bilbao kept the first trophy as inaugural winners, Sevilla FC were awarded the Trofeo del Generalísimo in 1939 and Atlético Madrid, winners the previous year, were awarded the 11th trophy following the death of Francisco Franco. In December 2010 the cup was given to Sevilla, the 2010 winners, to keep in honour of Spain's World Cup win. [5]

Before the formation of La Liga in 1929, the competition was effectively a national championship. Teams qualified to enter via their regional leagues. Over the years, various formats, including group stages have been used. Unlike the English FA Cup, entry is limited. Only teams from the Primera Division, Segunda A, about twenty-three teams from the Segunda B and the Tercera Division champions (or runners-up if the champion is a reserve team) are invited to enter. The early rounds are one-off games with teams from the lower divisions given home advantage. The round of 32, the round of 16, the quarter finals and semi-finals are played over two legs. The final is a one-off game played at a neutral venue. The winners qualify for both the Supercopa de España and the UEFA Europa League the following season.

On December 22, 2010 at an extraordinary general meeting of the Royal Spanish Football Federation, Sevilla FC requested permission from the federation to keep the trophy they had won in the 2009-10 final - to commemorate the victory of the Spain national football team at the 2010 FIFA World Cup. There had been a precedent for this - Real Madrid were allowed to keep the first Copa de la República (1936), Sevilla, the first Copa del Generalísimo (1939) and, Atlético Madrid, the last Copa del Generalísimo (1976).

A new trophy was made by Madrid jeweller Federico Alegre. The trophy, made of silver, weighs 15 kg (33 lb) and is 75 cm (30 in) tall. On April 21, 2011, Real Madrid became the first recipients of the trophy. During the post-game celebrations, the trophy was accidentally dropped at Plaza de Cibeles by the Real Madrid player Sergio Ramos from the top of a double-decker bus, which then ran over it. 10 pieces were found by civil servicemen when they recovered it from the ground. The club received a copy which is displayed at Santiago Bernabéu Stadium.[6][7] 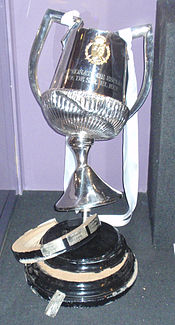 The trophy accidentally dropped by Sergio Ramos in 2011.

‡ Real Madrid's reserve team. Reserve teams were banned for this competition for first time in the 1990–91 edition.

Real Madrid CF were originally known as Madrid FC and did not add the Real until 1920. During the Spanish Second Republic the club dropped Real from their name. In 1941, a decree issued by General Franco banned the use of non-Spanish language names. FC Barcelona and Sevilla FC became CF Barcelona and Sevilla CF and Athletic Bilbao had to change the spelling of their prefix to Atlético. RCD Espanyol were known as RCD Español until 1995.