A church bell is a bell which is rung in a (especially Christian) church either to signify the hour or the time for worshippers to go to church, perhaps to attend a wedding, funeral, or other service. Before mass communication they were the only way to gather a village together, so they also served secular functions.

European Christian church bells typically have the form of a cup-shaped cast metal resonator with a flared thickened rim, and a pivoted metal striker or clapper hanging from its center inside. It is usually mounted high in a bell tower on top of the church, so it can be heard by the surrounding community. The bell is suspended at its apex from a horizontal axle, so it can swing from side to side. A rope is tied to a pulley or lever on the axle, and hangs down to ground level. To ring the bell, the bell-ringer pulls on the rope, swinging the bell. The motion causes the clapper to hit the inside rim of the bell as it swings, making the sound. Alternatively, the bell may be suspended from a stationary support, and the bell rung by pulling a rope attached to the clapper to one side. 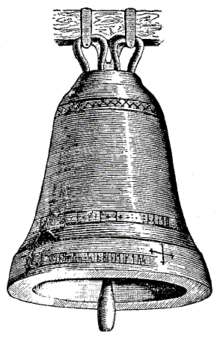 Church bell from Saleby, Västergötland, Sweden containing an inscription from 1228 in the Runic alphabet

In the Roman Catholic Church and some Lutheran, Anglican, and Methodist churches, a small hand bell or set of such bells (called altar bells, or sanctus bells) is rung shortly before the consecration of the bread and wine into the Body and Blood of Christ and again when the consecrated elements are shown to the people.[1]

The term Sanctus bell traditionally referred to a bell suspended in a bell-cot at the apex of the nave roof, over the chancel arch, or hung in the church tower, in medieval churches. This bell was rung at the singing of the Sanctus and again at the elevation of the elements, to indicate to those not present in the building that the moment of consecration had been reached. The practice and the term remain in common use in many Anglican churches.

Some church bells are electronically timed to chime automatically. Clocks generally automatically strike, but in the United Kingdom, bells for services, etc., are still almost always rung by people (see bell ringing and carillon). Some churches use recorded or digitally synthesised bells.

Church bells became common in Europe in the early Middle Ages.[2] They were first common in northern Europe, reflecting Celtic influence, especially that of Irish missionaries.[2] Before the use of church bells, Greek monasteries would ring a flat metal plate (see semantron) to announce services.[2] The signa and companae used to announce services before Irish influence may have been flat plates like the semantron rather than bells.[2] The oldest surviving circle of bells in Great Britain is housed in St Lawrence Church, Ipswich.[3] The oldest church bell in the world is one donated by Despot Alexius Slav to the metropolitan church in Melnik, Bulgaria, and dated to 1211-1216. It is now kept at the National Museum of History in Sofia.

In World War II in Great Britain, all church bells were silenced, to ring only to inform of an invasion by enemy troops.[4] The episode "The Battle of Godfrey's Cottage" of the BBC sitcom Dad's Army included a scene where the church bells rang by mistake, leading the Home Guard to believe that an invasion was taking place. The same event occurs in Dad's Army the movie - just after workmen come to apparently "take away" the bells, which is a misrepresentation.

In some liturgical churches, bells are blessed before they are hung.

In the Roman Catholic Church the name Baptism of Bells has been given to the ceremonial blessing of church bells, at least in France, since the eleventh century. It is derived from the washing of the bell with holy water by the bishop, before he anoints it with the oil of the infirm without and with chrism within; a fuming censer is placed under it and the bishop prays that these sacramentals of the Church may, at the sound of the bell, put the demons to flight, protect from storms, and call the faithful to prayer.

In the Orthodox Church the ceremony is even more elaborate.

In many Catholic churches, the ringing of a church bell for the Angelus prayer, in the morning, at midday and in the evening, is called the Angelus bell.

The noon bell was ordered by Pope Callixtus III in 1456, as a support for the Hungarian defenders of Belgrade to encourage their fight against the Ottoman Islamic expansion. The practice of Noon bell is traditionally attributed to the international conmemoration of John Hunyadi's victory at Belgrade.

The practice and hobby of bell-ringing is sometimes known to non-ringers as campanology. Change ringing is a particular facet of English bellringing where bells are rung in mathematical sequence. Wedding cards commonly show bells: this is founded on the tradition of ringing changes as the wedding couple leave the church.

In the Eastern Orthodox Church there is a long and complex history of bell ringing, with particular bells being rung in particular ways to signify different parts of the divine services, Funeral tolls, etc. This custom is particularly sophisticated in the Russian Orthodox Church. Russian bells are usually fixed, and are tolled by pulling on a rope that is attached to the clapper so that it will strike the side of the bell.

In many churches the ringing of bells is suspended during Holy Week, to be resumed only at the Paschal Vigil.

The ringing of a church bell to announce a death is called a death knell. The type of death knell sometimes depended on the person who had dies; for example in the counties of Kent and Surrey in England it was customary to ring three times three strokes for a man and three times two for a woman.