The British Rail Class 47, is a class of British railway diesel-electric locomotive that was developed in the 1960s by Brush Traction. A total of 512 Class 47s were built at Crewe Works and Brush's Falcon Works, Loughborough between 1962 and 1968, which made them the most numerous class of British mainline diesel locomotive.

They were fitted with the Sulzer 12LDA28C twin-bank twelve-cylinder unit producing 2,750 bhp (2,050 kW) - though this was later derated to 2,580 bhp (1,920 kW) to improve reliability - and have been used on both passenger and freight trains on Britain's railways for over 40 years. Despite the introduction of more modern types of traction, as of 2008 a significant number are still in use, both on the mainline and on heritage railways. As of August 2011, 99 locomotives still exist; between 25 and 30 are engaged on active work on the mainline.

The Class 47 history begins in the early 1960s with the stated aim of the British Transport Commission (BTC) to completely remove steam locomotives from British Rail by a target date of 1968.[1] They therefore required a large build of lightweight Type 4 locomotives to achieve this aim. This required locomotives producing at least 2,500 bhp (1,900 kW) but with an axle load of no more than 19 long tons (19 t). However, the BTC were not convinced that the future of diesel traction lay down the hydraulic transmission path of the Western Region, and began looking at various diesel-electric designs.

Despite the construction of two demonstration locomotives (D0260 LION, produced by AEI and BRC&W using a Sulzer engine,[2] and D0280 FALCON, built by Brush Traction using Maybach engines),[3] the need for a large number of locomotives quickly was deemed paramount, and the pilot build of what would become Class 47 began before the prototypes could be comprehensively assessed.[4] This initial build of 20 locomotives (Nos. D1500 to D1519) were mechanically different from the remainder of the type,[5] and would be withdrawn earlier. However, based on these and the success of LION, an order for 270 locomotives was made, which was later revised upwards a number of times to reach the final total of 512. Five locomotives, Nos. D1702 to D1706, were fitted with a Sulzer V12 12LVA24 power unit and classified as Class 48s; the experiment was not deemed a success, and they were later converted back into standard 47s.

The locomotives, bar a batch of 81 built for freight duties, were all fitted with steam heating boilers for train heat duties. The initial batch of twenty, plus D1960 and D1961, were also fitted with electric train heating (ETH).[8] With this type of heating becoming the norm, a further large number of locomotives were fitted with this equipment.

However, this numbering system was later disrupted as locomotives were fitted with extra equipment and were renumbered into other sub-classes.[12][13] For an overview of the renumbering see the Class 47 renumbering page. This section summarises the main sub-classes that were created. 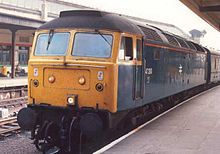 Originally numbered from 47001 to 47298, these locomotives were the "basic" Class 47 with steam heating equipment fitted.[14] In the 1970s and 1980s, with steam heating of trains gradually being phased out, all locomotives fitted with the equipment gradually had their steam heating boilers removed. Some were fitted with ETH and became 47/4s, whilst the others remained with no train heating capability and were therefore used mainly on freight work. In the 1990s, the class designation 47/2 was applied to some class 47/0s after they were fitted with multiple working equipment.[10] The locomotives involved also had their vacuum braking systems removed, leaving them air braked only. This was mainly a paper exercise, however, and the locomotives were not renumbered; in this article they are included in Class 47/0. 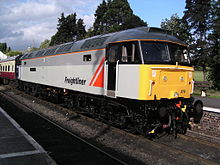 Originally numbered from 47301 to 47381, this sub-class was originally built with no train heating equipment and therefore remained freight locomotives almost exclusively for their working lives.[15] They were all fitted with slow speed control for working MGR coal trains (as were a number of Class 47/0s).[16] However, during the summer months when train heat was not required, 47/3s could regularly be found hauling the extra trains that the holiday season brought.[17] The sub-type remained stable until withdrawals started, although an "extra" 47/3, No.47300, was created in 1992 when No.47468 had its train heating equipment removed and was renumbered.[18] Also, No.47364 was renumbered to 47981 in 1993.[19] 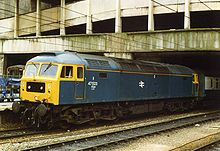 The designation for standard locomotives fitted with ETH and therefore used for passenger, mail and parcels use. 133 locomotives had been fitted by the time renumbering occurred, and shortly afterwards the sub-class had settled down to 154 locomotives, numbered 47401 to 47555, with one gap. Later, further class 47/0s were converted to class 47/4s and renumbered into the series, which eventually reached 47665.[20] 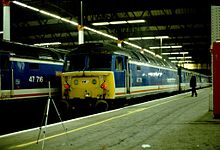 In the late 1970s, BR authorities identified a need to replace the ageing trains operating the Glasgow to Edinburgh shuttle services, in order to increase speed and reliability. The trains were operated by pairs of Class 27s, one at each end of this train. It was decided to convert twelve 47/4s to operate the service in push-pull mode. The locomotives would be known as Class 47/7 and would be fitted with TDM push-pull equipment and long-range fuel tanks, and be maintained to operate at 100 mph (160 km/h). The conversions began in 1979 and the service was operated completely by them from 1980. In 1983, the push-pull service spread to Glasgow-Aberdeen services, and a further four locomotives were converted. The sub-class therefore comprised Nos. 47701 to 47716, though a further locomotive, 47717, was converted in 1986 after the fire-damaged 47713 was withdrawn.[23] 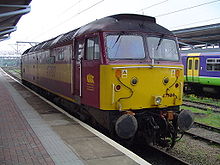 In the 1990s, further 47/4s were converted with long-range fuel tanks and the ability to be remotely controlled by a type of rolling stock known as propelling control vehicles, which were used on mail trains. They were also numbered into the 47/7 series, from 47721 onwards. With dwindling passenger work for them, a number of 47/8s, already fitted with the extra fuel tanks, were also renumbered into this series.[24] 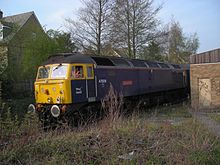 The last of the original 47/4 conversions, from 47650 to 47665, were fitted with extra fuel tanks, giving them an extended range. Four earlier Class 47/4s were also converted. In 1989 it was decided to give these locomotives easy recognisability, and so these locomotives were renumbered into their own series from 47801 to 47820. At the same time, further locomotives were fitted with extra fuel tanks and renumbered; the series eventually reached 47854.[26] After the privatisation of British Rail, the sub-class was mainly used by Virgin Trains on cross-country work until the introduction of their Voyager trains. A combination of relatively recent overhauls and the versatility provided by the extra range of this sub-class has meant that they have remained operational longer than the majority of their classmates.

By 1986, only five of the original 512 locomotives had been withdrawn from service, all because of serious accident damage.[26] However, with work for the class declining due to the introduction of new rolling stock, and spare parts becoming difficult to source, some inroads started being made.

The first locomotives to be targeted were the non-standard pilot batch of 20, now numbered 47401-47420. Three locomotives were withdrawn as life-expired in February 1986, and the remainder of the batch that had not recently been overhauled followed in the next two years. All 20 were withdrawn by 1992.[27]

Meanwhile, BR drew up a 'hit-list' of locomotives for early withdrawal, mainly including those with non-standard electrical equipment, known as series parallel locomotives.[28] In the outset, withdrawals were slow, mainly due to the surplus of spare parts and new flows of freight traffic which required extra locomotives; only 61 locomotives had been withdrawn by the end of 1992. However, with the introduction of new locomotives, the rate of withdrawal quickly rose, with 86 more 47s reaching the end of their lives in the next three years.[26] With most of the non-standard locomotives withdrawn, the reduction of the fleet again proceeded more slowly. The privatisation of British Rail also produced new independent rail companies needing available traction until they could order new locomotives. From 1996 to 2006, an average of around fifteen locomotives per year were taken out of service.[26]

During the decline in passenger work a number of locomotives were painted in "celebrity" colours, depicting various liveries that the type had carried during its history. This continued a tradition of painting 47s in unusual liveries, which dates back to 1977, when Stratford depot in East London painted two locomotives with huge Union Flags to celebrate the Silver Jubilee of Queen Elizabeth II.[29]

In 2007, after more than 40 years of front line passenger and freight operations, between 25 and 30 locomotives are operational at any one time on the National network.[30] The following is a list of companies currently operating Class 47s. 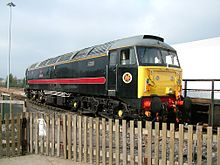 Class 47s have proved very popular with preservationists and private railways, and more than 30 have now entered preservation, with the majority in working order.[31] A full list can be found at list of preserved British Rail Class 47 locomotives.

A total of 33 withdrawn locomotives have been rebuilt with EMD engines and re-classified as Class 57s.[32][33] The production versions work for the goods train company Freightliner, and the passenger train companies First Great Western and Virgin Trains Limited, with the passenger prototype being operated by the West Coast Railway Company.

Between 1963 and 1966 ten locomotives similar to the British Rail Class 47 were supplied to Ferrocarriles de Cuba (Cuban National Railways).[42]

The Works Diesel from The Railway Series is based on the BR Class 47. He first appeared in "James and The Diesel Engines in 1984".[43]