Rewind is the name of a fictional character from the . 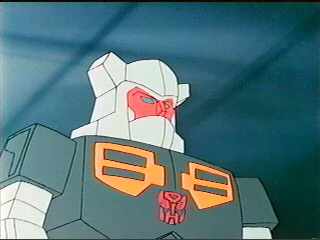 caption =
affiliation =Autobot
subgroup =Communications
rank =6
function =Archivist
partner =
motto ="Too much information is never enough"
alternatemodes =Black Micro Cassette Tape
series =
engvoice =
japanvoice =Rewind's bio painted him as the Autobots memory man - he can remember just about anything. Unfortunately, he fills it with pointless trivia, and is hence slightly defunct when it comes to important matters.

As a member of the Autobot communications sub-group Rewind frequently worked with its other members - Blaster, Eject, , Raindance, and .

Rewind first appeared as one of Blaster's warriors in , where he defended Blaster's communications tower from the Decepticon cassettes.

His most prominent role came in the episode, "Forever is A Long Time Coming". In this episode, Rewind, Blaster, , and are transported to Cybertron's past via a Quintesson time window. Rewind's information allows the Autobots to identify where they were in the timeline. He aided the prehistoric Autobots in defeating the , thus keeping the original timeline intact.

In episode 78, "Madman's Paradise", Spike and Carly hosted a banquet for a visiting ambassador. Daniel got bored and wandered off. followed him, and they fell into a lost chamber where Quintessons banished their criminals to other dimensions. They slipped through to the sorcerous other-dimensional realm of Menonia, and were tricked into fighting on the Red Wizard's side, only to find out that he was the Quintesson criminal, who overthrew the . , Blaster, Eject, Rewind, , and followed, and using Blaster's amplification, they help the Golden One defeat the Red Wizard. With the help of , the Autobots and Daniel are returned to Cybertron.

Rewind did not appear much after this in the U.S. series. However, he was in the Japanese series, , When Blaster was killed during a one on one confrontation with Soundwave, the Autobot cassettes were left without a leader. They salvaged his body and were able to reconstruct the body. Blaster was reformatted into , whose bodies were identical, except for the fact that his later form was blue instead of red.

Although Rewind would not appear in the US Transformers comic, he appeared in the UK "Space Pirates" arc. When the Quintessons attacked Autobot City and killed Blaster and the rest of its inhabitants, came to investigate. However, when he lost the Matrix and reverted to Hot Rod, he decided to use Blaster's cassettes, including Rewind, to fend off the Quintessons while he reactivated Metroplex.

Rewind was among the many Autobots who congregated in a secret base during the "Age of Wrath", when the recently-returned Megatron's Aerospace Extermination Squadron covered the planet Cybertron, capturing countless Autobot heroes and sending the remnants of the army underground.

It is unknown if his alternate mode at the time was still some form of data-storage device, or if he had a vehicular mode.

*Generation 1 Rewind (1986):Rewind was released in 1986 in a set of cassettes designed to accessorize the Season 2 Autobot . He was released in package with the yellow lion . Rewind shares a mold with the Autobots Eject, and Rosanna.