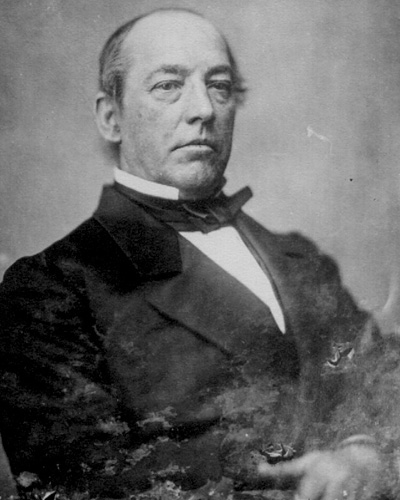 Caleb Blood Smith (, &ndash; , ) was an American journalist and politician, serving in the of during the .

Born in , he emigrated with his parents to in 1814, was educated at and , studied law in Cincinnati and in , and was admitted to the bar in 1828. He began practice at the latter place, established and edited the "Sentinel" in 1832, served several terms in the Indiana legislature, and was in the in 1843&ndash;1849, having been elected as a Whig. During his congressional career, he was one of the Mexican claims commissioners. He returned to the practice of law in 1850, residing in Cincinnati and subsequently in Indianapolis. He was influential in securing the nomination of for the presidency at the Chicago in 1860.

Lincoln appointed Smith as the in 1861 as a reward for his work in the presidential campaign. He was the first citizen of Indiana to hold a Presidential Cabinet position. However, Smith had little interest in the job and, with declining health, delegated most of his responsibilities to Assistant Secretary of the Interior . In 1862, he was interested in the empty seat in the United States Supreme Court vacated by 's resignation the previous year. However, Lincoln nominated David Davis for the position instead. After Smith resigned in December 1862 as the result of his discord with the , Usher became Secretary. Smith went home to become the United States circuit judge for . He died , , from his ill health. President Lincoln ordered that government buildings be draped in black for two weeks in a sign of mourning for Smith's death.

It has been said that Caleb B. Smith's body is buried in a , cemetery. In 1977 John Walker, a Connersville, Indiana resident, received permission from the Smith family, Norvella Thomas Copes, and Nancy S. Hurley, and the city of Connersville, Indiana, to excavate the body of Caleb Blood Smith. Walker had an interest in President , and discovered in reading about Lincoln that one of his cabinet members was buried in the city he lived in. An excavation was done in November, but Smith's body was not there. It was Smith's son-in-law William Watton Smith. C.B. Smith's wife, , had paid $500 for the choice of plots, in , but had to remove the body to in for fear of southern dissenters, the , desecrating his body and of local teens knocking over the markers. There was also a possibility that his body was in one of the two above ground vaults behind the , also known as , but both doors were standing open and had been for years, with nothing inside (also in Connersville, Indiana). A letter inquiring about the whereabouts of Smith's body found in the 1980s came from a N.Y. public library in the 1930s.