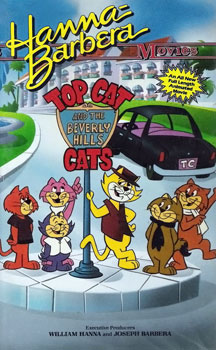 "Top Cat and the Beverly Hills Cats" is a 1987 animated television movie, produced by Hanna-Barbera Studios and distributed by Great American Broadcasting it is part of the "" film series and is based on the 1961-62 primetime animated series "". This telefilm's plot is essentially an extended remake of the series' episode "The Missing Heir".

The rights to the film are now owned by through their ownership of the H-B library.

The movie opens on what appears to be another average day in Hoagie's Alley (which, for the purposes of this story, has apparently been relocated closer to ) for Top Cat and his gang, who are today posing as Boy Scouts, out doing good deeds in the hopes of getting rewards. During the course of this, Benny the Ball saves the life of a . Unbeknowst to Benny, it is revealed afterwards that she is actually a rich woman named Mrs. Vandergelt, who plans to leave her fortune to her missing niece, Amy. Meanwhile, Officer Dibble arrives to put an end to T.C.'s shenanigans after an unsuccessful attempt by Brain to wash his police car's windshield. Just when Dibble is about to arrest the gang, though, he gets a call saying that his application for retirement has been approved, so he can now retire from the police force, and thus he drops the charges against T.C. and the gang.

A few days later, Benny receives news that Mrs. Vandergelt has died, and that she has put his name in her will. Upon hearing of this, T.C. and the rest of the gang accompany Benny to the Vandergelt mansion, where Dibble is now working as a security guard. At the mansion, they meet the conniving butler Snerdly, and his -esque wolfhound Rasputin. Mrs. Vandergelt's lawyer reads the will, which states that Benny inherits her fortune (seeing how the true heir to the fortune, Amy, is nowhere to be found), provided that nothing bad happens to him within the next two days. This upsets Snerdly, for he had hoped to obtain the fortune himself, so he and Rasputin plot to do away with Benny. T.C. and the gang move into the Vandergelt mansion with Benny.

After several failed attempts at murdering Benny, Snerdly realizes that to get to Benny, he'll have to get rid of the protective T.C. To do this, Snerdly calls up a femme fatale cat named Kitty Glitter, telling her that he has fixed her up a date with a handsome rich cat, as he describes T.C. Kitty is eager to have a rich cat for a husband (to the point that she puts on a wedding dress for the date), but this plan is foiled when she mistakes Brain for T.C. It's only when Snerdly calls her again, demanding to know where she is, that she realizes she's made a mistake.

That night, Snerdly throws a costume party, making Benny wear a bulldog mask and then calling up the local dogcatcher to say that there's a mutt roaming around the Vandergelt estate. Sure enough, the dogcatcher arrives and captures Benny. It doesn't take long for T.C. and the rest of the gang to realize that Benny is missing, so they go looking for him. Thanks to a tip-off from Dibble, T.C. finds out that Benny has been taken to the pound, so they take the limousine there and break Benny out. Just as they escape, though, the dogcatcher takes off after them in hot pursuit.

As it turns out, the missing Amy (whose character is a parody of ) has been working at a as part of Snerdly's evil plot. While on the run from the dogcatcher, T.C. and the gang turn up in the car wash and recognize Amy from a portrait hanging in the mansion, so they decide to bring her back to the mansion so that the inheritance can be rightfully given to her. They arrive too late, as it is now midnight and Snerdly has just inherited the Vandergelt fortune, but the lawyer then reveals that "he" is in fact the not-really-deceased Mrs. Vandergelt, who has in fact faked her death as part of a scheme to unmask Snerdly's crookedness. In their attempt to escape, Snerdly (who attempts to disguise himself using the aforementioned bulldog mask) and Rasputin are caught by the dogcatcher.

In the end, T.C. and the gang return to their old lifestyle in Hoagie's Alley, and Dibble rejoins the police force. Kitty Glitter reappears, still wanting to be wed to the rich cat she believes T.C. to be, but she dumps him when Brain lets it slip that they're broke. Afterwards, Amy pays a visit to have a picnic with T.C.'s gang and Dibble.

Two unknown voice actors took over "Top Cat" series regulars Maurice Gosfield and Allen Jenkins' roles as the voices of Benny and Officer Dibble for the TV film. However, both Gosfield and Jenkins are credited for their roles.

* At the beginning of the film, Benny is seen riding on the side of a limousine with the camera angled so that it looks like he's inside until the limo turns a corner. This is a direct reference to the original series' intro sequence, which had T.C. doing the same thing (the gag itself actually originated in the "Donald Duck" short "The Autograph Hound").
* and the Rubbles can be seen living on Megabucks Drive as the tour bus drives by.