Unas's name on a stela at Saqqara

Unas (also Oenas, Unis, Wenis, or Ounas) was a Pharaoh of Ancient Egypt, and the last ruler of the Fifth dynasty from the Old Kingdom.[1] His reign has been dated as falling between 2375 BC and 2345 BC.[2] Unas is believed to have had two queens, Nebet and Khenut, based on their burials near his tomb.[3]

With his death, the Fifth dynasty came to an end, according to Manetho; he probably had no sons. Furthermore, the Turin King List inserts a break at this point, which "gives us some food for thought," writes Jaromir Malek, "because the criterion for such divisions in the Turin Canon invariably was the change of location of the capital and royal residence."[4] However, there are several instances of uninterrupted continuity between the Fifth and the sixth dynasties: Kagemni, the vizer of Unas's successor Teti, began his career under Djedkare Isesi and Unas. Teti's queen, Iput, is believed to have been the daughter of Unas, which shows Teti, Nicolas Grimal argues, "made no conscious break with the preceding dynasty."[5] Jimmy Dunn adds that "a pink granite gateway in Unas' mortuary temple bears the inscription of the names and titles of Teti, indicating that part of the temple was completed after Unas's death."[6] The break between the two dynasties may have been more as an official act than in fact.

The causeway of Unas's pyramid complex includes a bas relief showing how they transported a palm column by boat on the Nile.[7] 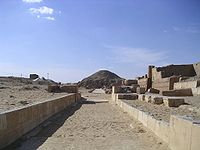 View of the remains of Unas’ pyramid at Saqqara

He built a small pyramid at Saqqara, originally named "Beautiful are the places of Unas", close to the Step Pyramid of Djoser. It has been excavated by Vyse, Barsanti, Gaston Maspero, Firth, Selim Hassan, A. Husein, and Alexandre Piankoff.[8] Its interior is decorated with a number of reliefs detailing events during his reign as well as a number of inscriptions. However, Jaromir Malek considers "the main innovation of Unas' pyramid, and one that was to be characteristic of the remaining pyramids of the Old Kingdom (including some of the queens), was the first appearance of the Pyramid Texts".[9] These texts were inscribed in Sixth Dynasty royal versions, but Unas's texts contains verses and spells which were not included in the later 6th dynasty copies.[10] The pyramid texts were intended to help the king in overcoming hostile forces and powers in the Underworld and thus join with the Sun God Ra, his divine father in the afterlife.[11] The king would then spend his days in eternity sailing with Ra across the sky in a solar boat.[12]

An example of a pyramid Text here is given below: