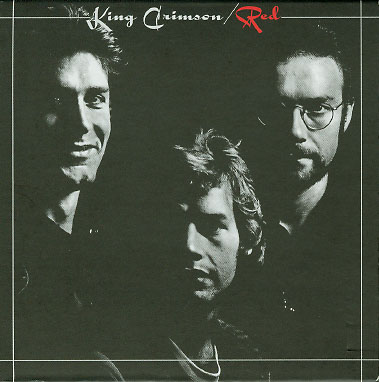 
"Red" is a 1974 album by group . It was their last recording of the 1970s and the last before the lead member temporarily disbanded the group. Fripp and drummer are the only personnel on this album to appear in later versions of King Crimson.

David Cross left King Crimson in 1974, reducing the group to the trio of , and . The trio recorded "Red" with the help of Cross and former band-members Ian McDonald and . Fripp disbanded King Crimson on , , and the album was released later that year with no accompanying tour.

While musically similar to its predecessor "", "Red" was produced very differently from previous King Crimson albums, resulting in what band-members felt was a better approximation of their aggressive live sound.Fact|date=September 2007 For instance, while the features prominently in previous releases, on "Red" it is heard only for a few bars in "Fallen Angel". Also, unlike previous King Crimson albums, "Red" features extensive use of . Later albums lacked acoustic guitar entirely and reverted to a minimum of overdubs, though by that point the band featured multiple guitarists playing simultaneously.

The record faltered on the British charts. In the United States, it reached #66 on the .

However, it remained a popular album with fans and critics. In 2001 "Q" magazine named "Red" as one of the "50 Heaviest Albums of All Time," [ [http://www.rocklistmusic.co.uk/qlistspage2.html#50%20Heaviest 50 Heaviest Albums of All Time] ] and has cited the album as a major influence. [ [http://www.elephant-talk.com/wiki/Interview_with_Robert_Fripp_in_Rock_and_Folk Interview with Robert Fripp] ] [ [http://www.elephant-talk.com/wiki/Interview_with_Bill_Bruford_in_Percussioni_%28in_Italian%29 Interview with Bill Bruford (in italian)] ] Musicologists and both consider "Red", and particularly the track "", to be the highlight of King Crimson's recorded output. Users of .com have rated it the 62nd greatest album of all time [http://rateyourmusic.com/release/album/king_crimson/red/] .