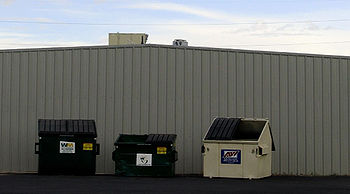 Green Dumpster with graffiti and posters 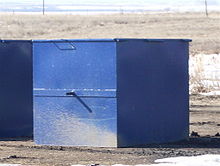 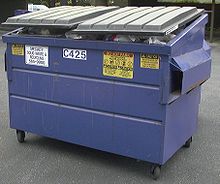 A dumpster is a large steel waste receptacle designed to be emptied into garbage trucks. The word is a genericized trademark of Dumpster, a American brand name for a type of mobile garbage bin (MGB). Generic usage of dumpster is also common in Australia, although Dumpster is not an established brand there.

The word "dumpster", first used commercially in 1936,[1] came from the Dempster-Dumpster system of mechanically loading the contents of standardized containers onto garbage trucks, which was patented by Dempster Brothers in 1937.[2][3] The containers were called Dumpsters, a portmanteau of the company's name with the word dump. However, it took the Dempster Dumpmaster, the first successful front-loading garbage truck (which used this system), to popularize the word.

The word dumpster has had at least three trademarks associated with it by Dempster Brothers,[4][5][6] but today it is often used as a genericized trademark.

In British and Australian English, the terms wheelie bin and skip are more commonly used (although they are not perfect synonyms). In some other countries the more descriptive term frontloader container is often used, either in one or two words.

The main purpose of a dumpster is to store rubbish until it is emptied by a garbage truck and disposed of. Dumpsters can be used for all kinds of waste, or for recycling purposes. Most dumpsters are emptied weekly by a hired rubbish removal service.

Many businesses, apartment buildings, schools, offices, and industrial sites have one or more dumpsters to store the waste that they generate. Dumpsters are emptied by front-loading garbage trucks. These trucks have large prongs on the front which are aligned and inserted into arms (or slots) on the dumpster. Hydraulics then lift the prongs and the dumpster, eventually flipping the dumpster upside-down and emptying its contents into the truck's hopper (storage compartment).

Other dumpsters are smaller and are emptied by rear-loading trucks. Mobile construction dumpsters are 6 cubic yard dumpster trailers called Roadrunners, and are commonly used in Dallas, Texas on smaller remodeling jobs or for garage or lawn cleanouts. Roll-off dumpsters are large dumpsters from 10-45 cubic yards. These are used at demolition sites, cleanouts, renovations, construction sites, factories and large businesses. 95 gallon dumpsters (or toters) are used by small businesses and homes where a normal bin would be too small, but a regular dumpster would be too large.

Roll-off / Containers / Dumpsters / Opentop Containers are just a few of the names given to these large capacity receptacles. These containers are normally carried by very large trucks with hydraulic arms which load and unload the containers with ease, thus allowing these trucks to place these containers in a relatively unobtrusive position. 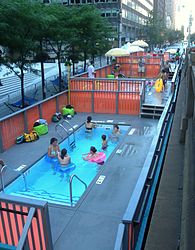 Dumpster diving involves persons voluntarily climbing into a dumpster to find valuables, such as discarded metal scrap, or simply useful items, including food and used clothing. It can also be a method of investigation (e.g., looking for discarded financial records, corporate papers or evidence of a crime).

Bart: Otto-Man? You're living in a dumpster?
Otto: Ho, man, I wish. Dumpster-brand trash bins are top-of-the-line. This is just a Trash-Co waste disposal unit.