Infobox Film
name = How She Move 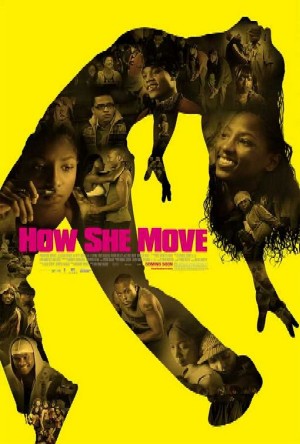 "How She Move" [""] is 2008 directed by and starring , and Romina D'Ugo. The film showcases the emerging street culture of step dancing. The film is produced by Celluloid Dreams, Sienna Films and .

An aspiring medical student whose sister has recently died and who may be forced to relocate from a private school to the neighbourhood in which she was raised enters a step-dancing competition in hopes of securing the funds needed to continue her education. Unable to afford the tuition needed to fund her private-school education, ambitious teen Raya "()" returns to her family home in the city while reluctantly forced to re-evaluate her future. Upon learning that the top prize for an upcoming step-dancing competition is $50,000, Raya uses her impressive moves to earn a coveted slot in her good friend Bishop's "()" predominately male JSJ crew. Isolated from the local females due to jealousy and separated from her fellow dancers by gender, the ambitious dancer is subsequently kicked-off the team for showing off during a preliminary competition. Now, if Raya has any hope of realizing her medical school dreams, she will have to either earn back Bishop's trust or organize her own dance crew and start over from scratch.

This Canadian film was original slated to open in Canada in March 2007, but when it picked up a distribution deal from Paramount and MTV at the , the release date was pushed back to allow for reshooting several of the dance sequences, particularly the finale. The film was shot on Super 16mm for $5 million, and Paramount invested another $2 million in the new sequences, re-editing, and new sound mix. They created a new soundtrack with American and Canadian hip-hop artists. The film was originally set and filmed in Toronto, Canada, but the new edit removes references of the team traveling from Toronto to Detroit for the dance competition. [ [http://www.macleans.ca/culture/entertainment/article.jsp?content=20080117_76374_76374&page=1 How she move that 49th parallel] MacLean's January 17 2008] Paramount/MTV spent another $10 million in promotion and distribution to 1500 theatres in the United States and 50 in Canada. [ [http://www.brantfordexpositor.ca/ArticleDisplay.aspx?e=881751&auth=Elizabeth+Yates Brantford screenwriter hits it big] Brantford Expositor February 1 2008]

"How She Move" delivered mainly positive critical response. On its listing, 66% of critics gave it positive response, based on 70 reviews. The critical consensus for the film was "energetic and gritty".

Having been released in U.S. theaters on January 25th, 2008, the film was released on DVD on April 29th. The film was also released in Australian cinemas on April 10th, 2008, and will be available on DVD from September 4th.

According to the film's Myspace page, the official track listing is as follows: