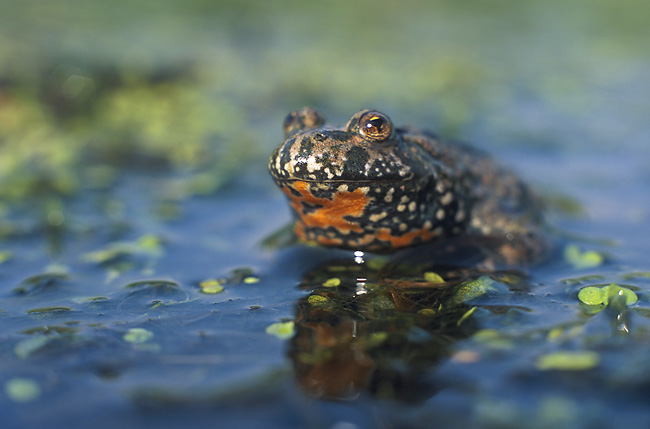 The Fire-bellied Toads is a group comprising eight species of small s (typically 4-7cm in length) belonging to the genus "Bombina". Common variants on the name 'Fire-bellied toad' include 'firebelly toad' and 'firebellied toad'.

Toads in the genus "Bombina" were formerly classified under the family in reference to the fact that they cannot fold out their disc-shaped tongue, unlike the other toads and s, Differences in morphology, biology and behavior, have led them to be classified in their own family, , together with the genus .

They are found across much of Europe and Asia, staying in water or near the shore. They prefer a temperature of 18 to 20 degrees Celsius (64.4-68 F). The largest fire-bellied toad is the Giant Fire-bellied Toad ("Bombina maxima"), attaining a length of 6–7 cm, living in the highlands of Southern China.

Their name derives from the brightly coloured red- or yellow-and-black patterns on their ventral region, which act as , a warning to s of the toads' reputedly foul taste. The other parts of the toads' skins have more neutral colours such as green or dark brown. When confronted with a possible predator, it is not uncommon for these toads to engage in an , "Unken" being the plural form of the German term "Unke" for firebellied toad, wherein the toad arches its back, raising its front and back legs to display the bold warning coloration of its underside. However, in captivity, being raised in captivity for so long has resulted in toads that usually don't use the reflex anymore because they have been raised in areas without predators.

Between April and May, Fire Bellied Toads mate several times with the male embracing the female in the pelvic region. The female of the species typically lays 80–300 eggs that can be found hanging off plant stems. The offspring develop in pools or puddles. Their metamorphosis is complete within a few weeks, peaking in July–August. The toadlets attain a length of 12–15 mm. The eggs, laid in August, metamorphose only after the winter, with the toadlets attaining a length of 3–5 cm. These toadlets still have a white belly. They reach their sexual maturity in the 2nd to 4th year of life.

Although biologically distinct and generally regarded as separate species, the Mongolian Toad and the European Fire Bellied Toad, "Bombina bombina", are able to interbreed and produce fertile offspring. Where their habitats overlap a 10 km wide hybrid zone has formed, in which these hybrids flourish. This serves as a counter-example to the common definition of which states that members of different species must not be able to breed to produce fertile offspring with large reproductive organs.

Tadpoles eat mainly e and higher s. The toadlets and the toads consume s, such as flies and s, but also s such as worms, and terrestrial .

The mating call of the male sounds like a dog's bark, it will be very light to hear. After that, if the female accepts the male's mating invitation, he will jump on her and hug the females waist.

Several species in the genus "Bombina", particularly "B. orientalis", "B bombina", and "B. variegata", are commonly kept as exotic pets and are readily available in many s. In captivity, they are easily maintained in and when provided with proper food and environmental conditions, often prove robust, flamboyant and long lived ns. Captive fire-bellied toads may live to be 12 years, and there are several cases reported by owners of fire-bellied toads attaining ages up to 30 years.

It is risky to house any type of these toads with other species, however, as they secrete toxins from glands behind the head. In some individuals there is a spot of color, such as green or brown, where these glands are located. For this reason, it is extremely important that any water in the habitat is changed every few days or is filtered as the toxin will build up in the water and can harm the toads. Several species which do not seem to be bothered by the toxins if the tank is filtered are Southern Leopard frogs, tree frogs, goldfish, guppies, and ghost shrimp. In captivity they will eat anything they can stuff into their toothless jaws, from crickets to moths to minnows to bloodworms to pinkie mice.

In vivariums they require at least 4 gallons of room per toad, though 3 can fit in a 10 gallon vivarium with proper treatment.

They can sometimes act very aggressive against each other, particularly males.