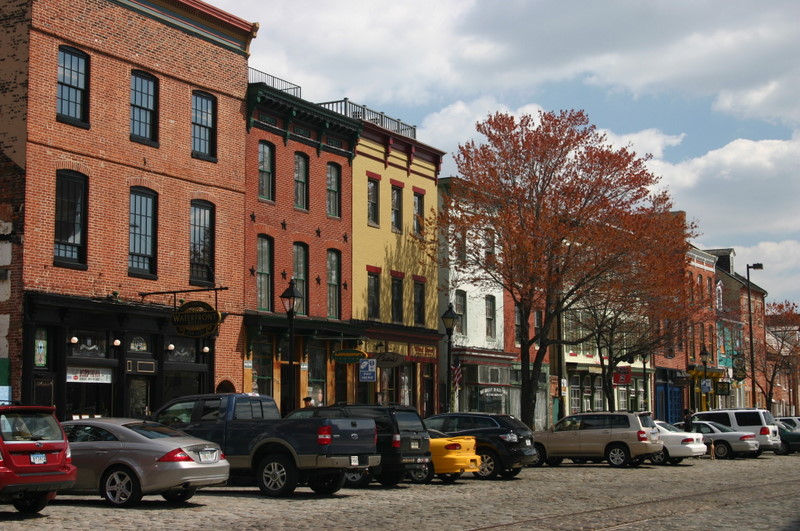 Fells Point is a in , home to a variety of shops, restaurants, coffee bars, music stores, and over 120 pubs. Located on the harbor and famous for its maritime past, it now boasts the greatest concentration of pubs/bars in the city. This waterfront community is a much-visited location in Baltimore, accessible by , , and several bus lines. The neighborhood has also been the home of large Polish, Irish, and populations throughout its history. In recent years an ever-greater number of have also moved into the neighborhood, being brought in by the of the area. Fells Point is one of several areas in and around Baltimore that are listed on the .

Founded in 1730 by William Fell, who was attracted by its beautiful deep water and proximity to agriculture and thick forests, Fells Point became a shipbuilding and commercial center. About 1763, William's son Edward Fell laid out streets and began selling plots for homes. The town grew quickly, and eventually incorporated with Baltimore Town and Jones Town in 1797 to form the City of Baltimore. The area grew wealthy on the tobacco, flour, and coffee trades through the 18th and 19th centuries.

Some of the first vessels commissioned for the US Navy were built in Fells Point yards, including the USS "Constellation" in 1797. However, the area became best known for producing topsail , sometimes erroneously called Baltimore clippers, renowned for their great speed and handling. They were excellent s, and were frequently used as armed s. The is based on the "Chasseur", built by Thomas Kemp, which was one of the most successful privateers built in Fells Point.

During the , Fells Point built and supported dozens of who preyed on British shipping. Thus, Baltimore became a principal target of the British during the war, which eventually led to the bombardment of .

Another growth industry in Fells Point was , and it became a major point of entry into the United States. Since jobs were plentiful in shipbuilding and in the warehouses and factories, many of the immigrants stayed in Fells Point. This added to the multi-cultural fabric of the area, but also caused the more affluent to move into other parts of the city.

Fells Point remained a shipbuilding center until the Civil War, when it could no longer accommodate larger ship designs. Likewise, the shipping industry slowly moved away to larger facilities. The area transitioned into manufacturing, with innovations in canning and packing. The neighborhood also escaped serious damage during the which destroyed the downtown area. Eventually much of the manufacturing left the city, resulting in a decline in the neighborhood until preservationists organized to save the area's historic buildings.

In 1965, transit planners proposed to link and I-95 by building an elevated highway along the north shore of the Baltimore harbor. This project would have entailed extensive demolition within Fells Point, and the highway would have cut off the remainder of the neighborhood from the waterfront. A freeway revolt against the proposals was raised by local residents and derailed the project. One of the leaders of the revolt was , who would go on to become a Senator from Maryland.

Fells Point achieved some fame as the central setting for the 1990s network police drama "", and has been the site of many films shot in Baltimore.

Fells Point, located to the East of the , suffered extensive flooding during in September 2003.