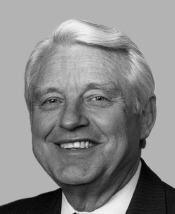 Packard was born in , where he grew up. He attended Meridian High School, , , and Dental School, where he received a D.M.D. in 1957. He was in the Navy Dental Corps during 1957&ndash;1959, and worked as a dentist after leaving the Navy.

Packard first entered politics as a trustee of the Carlsbad Unified School District in , and served during 1962&ndash;1974. He was elected to the Carlsbad city council in 1976, then elected of Carlsbad in 1978. While mayor, he was active in community and regional affairs, serving on the transportation policy committee of the League of California Cities, as a Director of North County Transit District, and as President of the Council of Mayors for San Diego County.

In 1982, Packard lost the Republican primary for in a crowded field of candidates to by 92 votes. [ [http://www.cqpolitics.com/2006/08/trivia080906.html CQ Politics Trivia] ] Crean's character came into issue, with his negative ads and false claim of endorsement by , so, after some reluctance, Packard launched a campaign as a . Packard ran a poll which found that voters would vote for him, especially if they knew how to write him in. Packard campaigned with a gigantic pencil as a prop while giving out golf pencils to district residents. An organized effort among fellow Mormons helped the campaign. Packard won the election by 11,000 votes to become the first independent write-in candidate to defeat candidates of both the Democratic and Republican parties. NPR's described the race this way:cquote|Eighteen Republicans were running in the primary for the seat being vacated by Rep. (R). The winner was political novice Johnny Crean, whose family wealth bankrolled his saturation of the airwaves in the district, situated just north of San Diego. Crean spent well over $750,000 in the primary, then a substantial amount, mostly attacking his fellow Republicans, while ducking candidate forums and personal appearances. Crean defeated Carlsbad Mayor Ron Packard in the primary by 92 votes out of more than 83,000 cast. Furious, Packard announced a write-in effort. Fearful that the GOP split in this overwhelming GOP district could end up electing a Democrat, there was great pressure on Packard to end his bid. But he refused, and won the seat with 37 percent of the vote. The Democrat finished second with 32 percent; Crean received 31 percent. [cite news | title=Political Junkie | url=http://www.npr.org/templates/story/story.php?storyId=5698889 | author=Ken Rudin | publisher= ]

Packard was only the fourth person to be elected to Congress as a write-in candidate. [ [http://www.signonsandiego.com/news/politics/20060410-9999-1m10campaign.html "Hopefuls sling mud in run-up to election", San Diego "Union-Tribune", 2006-04-10 by Dani Dodge] ] Upon being sworn in, Packard joined the Republican caucus. He was reelected as a Republican eight times with no substantive opposition in the heavily Republican district.

Packard's congressional career included membership on the House Appropriations Committee. Packard served a total of nine terms and then retired from the House at the end of his term in 2001 to spend time with his family. In Congress he was known as a deficit hawk, a critic of legislative "pork", and opponent of illegal immigration. He was succeeded by Republican .

Packard and his wife Jean live in Carlsbad. They had seven children. Packard works part-time as a in .