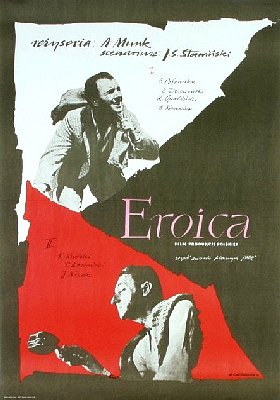 Heroism (Original title "Eroica") is a film by . It is composed of two separate film novels, each featuring the Polish concept of heroism and a role of a hero.

Eroica won the Award at the .

The first part is a bitter, tragicomic story of Dzidziuś, a street-wise bon-vivant, drunkard and coward who unwillingly becomes a soldier in the during the . Dzidziuś wife Zosia is having an affair with a Hungarian officer stationed nearby, and Dzidziuś is ordered to contact the Hungarian unit and convince the officer to join the battle against the s.

The second novel is set in a camp for Polish soldiers. Lt. Zawistowski, one of the interned soldiers, decides to make an attempt to escape from the camp. While none of his fellow inmates are sure whether he succeeded, his absence upsets the guards and provides hope and inspiration for the rest of prisoners. Soon his legend grows, making him a hero within the camp and helping to boost the prisoners' morale. However, it turns out that Lt. Zawistowski didn't actually follow through on his escape plans, but is hiding in the attic of one of the barracks. It turns out that he was hiding from his colleagues, whose ostentatious patriotism he simply couldn't stand.

* Edward Dziewoński as Dzidziuś
* Tadeusz Łomnicki as Lt. Zawistowski
* as Zosia
* as the Home Army Major
* as the Hungarian officer
* as the Home Army commander of
* as Lt. Turek
* Henryk Bąk as Lt. Krygier
* as Szpakowski
* Bogumił Kobiela as Lt. Dąbecki
* Stanisław Bareja as a Home Army soldier
* as Kardas
* as Lt. Marianek