Pasir Ris is primarily a residential area in Singapore comprising many high-rise residential dwelling blocks, mostly public housing built by the Housing and Development Board in Pasir Ris New Town. The town is located in the eastern part of Singapore.

Like other new towns, public transport facilities were factored into the development of Pasir Ris. Pasir Ris is easily accessible via bus services at Pasir Ris Bus Interchange and the Mass Rapid Transit at Pasir Ris MRT Station.

The first reference to a village of Pasir Ris, Passier Reis, appeared in 1852. There has been conjecture that perhaps this is a contraction of Pasir Hiris (pasir is "sand" and hiris means "to shred" in Malay).

The area was known as White Sand because it had a good beach. A major shopping complex, White Sands Shopping Centre, is located in the area that embodies the local place name. 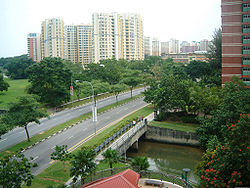 Api Api River in a Suburb of Pasir Ris 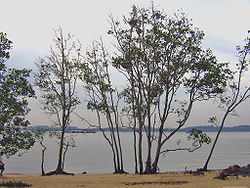 In proximity to the sea, Pasir Ris has several recreation areas like the NTUC Downtown East, which have facilities like chalets, theme parks, a bowling alley, a park for pets and pet owners and Pasir Ris Park. There is also another park by the name of Pasir Ris Town Park, close to where the Shopping Centre White Sands is located. The park sports a park connector, a playground, an eatery, fitness station and fishing pond. The bowling alley building in Downtown East will be demolished to make way for a new four storey shopping and entertainment complex with a cinema which will be completed in 2007 called e!hub. e!hub was completed in 2008 which includes a new bowling alley, which replaces the old one. The area also includes two theme parks. They are Escape Theme Park which opened in 2000 and Wild Wild Wet which is a water-based theme park that opened in 2004.

Pasir Ris is also part of the Jurong Town Corporation's plan to develop wafer fabrication facilities in Singapore. The other two locations are Tampines and Woodlands. Presently, there are two major wafer fabrication parks in Pasir Ris. Companies situated there include United Microelectronics Corporation and Systems on Silicon Manufacturing. 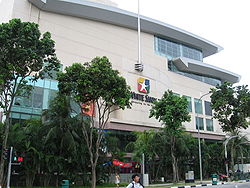 Popular Singaporean singer and songwriter Kevin Mathews, who grew up in the area once wrote a song Pasir Ris Sunrise, a parody of the song Waterloo Sunset