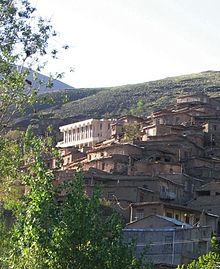 Jama'at Khana -literally, a "congregational place" an amalgamation derived from the Arabic word jama‘a (gathering) and the Persian word khana (house, place) is used by various South Asian Muslim communities to denote a place of worship or gathering. Among South Asian Sunni Muslims, the term is often used interchangably with the Arabic word Musalla, which is a place of worship that has not been formally sanctified as a masjid[1]. Nizaris, and other Ismailis use the term to denote their gathering places.

The Jama'at Khana as a place of gathering and worship

While the mosque, or masjid, is the religious building most often associated with Muslim piety, a range of spaces for worship and practice can be found throughout the breadth of the Muslim world.[2] Some are concentrated within particular geographic regions while others are in use by specific communities. Some of these include: husayniyas[3] (also known as ashurkhanas,[4] imambaras,[5] matams[6] or tekiyas[7]) used by Ithna ‘Ashari Shi‘i communities; ''khanaqas,[8] ribats,[9] tekkes[10] and zawiyas[11] used by mystically-oriented Muslim communities commonly referred to as Sufis; the cemevi[12] of the Turkish Alevi Muslims; and the majlis and khalwas of the Druze Muslims.[13] Other sites, such as shrines (dargah, astan, rawzah, maqbara, etc.), are a common feature of the Muslim religious landscape and can be found throughout the world. For Nizari Ismailis, the primary space of religious and social gathering is the jamatkhana. The jamatkhana is also the term used to designate spaces used by a number of other Muslim communities with bases in South Asia: the Chisti Sufi tariqa,[14] the Sunni Memon community[15] and various branches of the Musta’li Ismaili community[16] including the Dawoodi Bohras and Alevi Bohras.

The term jamatkhana is also shared with other Muslim communities in the Subcontinent to designate their communal spaces. These include members of the Chishti Sufi tariqa who utilize their jamatkhanas as a meeting space for conversation and counsel with the pir or teacher;[17] the Shi‘i Bohra Ismaili communities use the term to designate the space for social gatherings and communal meals;[18] the Sunni Memon jamatkhana is a space for cultural gatherings and special occasions.[19]

The term Jamaat Khana is commonly used by South Asian Sunni Muslims[1] and their diaspora[20] to describe a gathering place for communal prayer that has not been consecrated as mosque (masjid), although in formal usage, the term Jamaat Khana is often replaced by the term Musallah[20] (although musallah also can refer to a prayer rug). Spaces designated as jamatkhanas can also be seen in Mughal complexes, such as that of the Taj Mahal in Agra.

The Jama'at Khana in Ismailism

The exact origins of the use of jamatkhana in the Nizari Ismaili tradition are not as yet clear. However, communal memory, oral traditions and individual ginans (Indo-Muslim religious poems) narrate that Pirs Shams (fl. between 13th and 15th centuries)[21] and Sadr al-Din (fl. 14th century),[22] emissaries appointed by the Ismaili Imam in Persia and sent to the Subcontinent in the service of the faith, established the first such spaces for the nascent Nizari Ismaili communities in Sindh, Punjab, Kashmir[23] and China[24] during their lifetimes. Jannatpuri, a long composition known as a granth and belonging to the genre of the ginan, by Sayyid Imamshah (d. after 1473) situates one of the earliest of these jamatkhanas to a place by the name of Kotda, which is thought to be in modern-day Pakistani Sindh.[25] The same composition also mentions that the village headman, the mukhi (Sanskrit: mukhya) was closely associated with the jamatkhana as an official.[26]

The jamatkhana was a space particular to several localized Nizari Ismaili communities of the Subcontinent, primarily in delta regions.[27] It was subsequently adopted by a wider range of Indian Ismaili communities in subsequent decades and centuries. These diverse groups, each with their own histories, identities and social organization identified themselves using various names such as Momin (or Mumna),[28] Shamsi,[29] Khoja[30] and Gupti,[31] and traced their conversion to Islam through various Ismaili pirs. Collectively these communities adopted the practice of Satpanth (lit. true path), a designation for Shi‘i Ismailism of this period in the Subcontinent which included communal congregation in the jamatkhana[32]

The term jamatkhana itself is derived from the Arabic word jama‘a (gathering) and the Persian word khana (house, place), which together can be translated as ‘a place of congregation’ or ‘assembly house’. The term, however, seems to have come in use to designate the place of Satpanthi religious gathering fairly late, possibly not until the last decades of the 18th or early years of the 19th centuries.[33] The most common term used in the ginans to refer to these spaces is the term gat.[34]

The Evolution of the Jamatkhana

By the mid-19th century, however, as Ismaili communities migrated from towns and villages to urban centres throughout the Indian Ocean littoral, the khana seems to have become a distinct space housed in a separate structure, usually located within a mohalla, or enclave, of Satpanthi believers. Several of the oldest extant examples of jamatkhanas go back to this period. Most, however, have subsequently been renovated and added to, to accommodate the changing functional needs and ritual practices of the jamats (congregation) that they serve. The oldest of these urban structures can be found in places such as Gwadar (present day Pakistan), Zanzibar and Bombay (present day India). More modest examples that date from this period can also be found throughout Kutch and in Jerruk in interior Sindh, the residence of Aga Khan I upon his arrival to the Subcontinent. The architecture and organization of these spaces tell us that there was no single architectural template or model of the jamatkhana, but rather each was constructed based on a series of circumstances including such things as location, cultural environment, architectural practices of the period and resources available. The variations from one jamatkhana to the next also gives us clues to the nature of practices, the use and allocation of space and the nature and function of social relationships. Some of these were due to the cultural milieu in which the jamatkhanas were situated while others followed general traditions of pietic and religious culture, which in turn informed rules of decorum and etiquette within these spaces.

In 1870, the Bombay Jamatkhana in Khadak became the first jamatkhana assigned as a darkhana.[35] The term, was initially used to designate the chief residence of the Imam. In later years, however, it came to stand for the principal jamatkhana in a national context. Today, eight countries have darkhana jamatkhanas in the Nizari Ismaili tradition. These include India, Tanzania, Kenya, Uganda, Canada, Pakistan, England and Portugal.[36]

The Jamatkhana as the Centre of Ismaili Practice

While the jamatkhana initially began as a space of congregation specific to Satpanthi communities, it eventually was adopted by Ismaili communities with different geographic, cultural and linguistic backgrounds and historical experiences who before this congregated in spaces with different trajectories and nomenclatures.[37] During the seven decades of Sir Sultan Mahomed Shah, Aga Khan III’s (d. 1957) Imamat, formal relationships with Ismaili communities living in Tajikistan, Afghanistan, China, the Northern Areas of Pakistan, Persia and Syria, were strengthened.[38]

Ismailis of the Northern Areas of Pakistan, namely Chitral, Ghizr, Gilgit, Hunza, as well as the border regions of China, were some of the first communities to adopt the jamatkhana into their ritual life. The seeds of these institutions were planted in 1923 when a missionary by the name of Ramzanali Sabzali (d. 1938) was sent to these various communities by Aga Khan III.[39] Jamatkhanas were also introduced in Syria in the period of the 1940s. It was not however, until the tenure and leadership of the present Imam of the Ismailis, His Highness Prince Karim Aga Khan (b. 1936) that similar spaces were also introduced in Iran (1960s), Afghanistan (1960s and 2001) and Tajikistan (2009).[40] In parts of Iran, spaces referred to as khane-ye kolon[41] and khanqah[42] preceded the jamatkhana.

In 1979, the foundation stone was laid for what was to become the first ‘Ismaili Centre’ in London’s South Kensington neighbourhood.[43] The high-profile building which was opened by Prime Minister Margaret Thatcher (b. 1925; r. 1979-1990) in the presence of His Highness the Aga Khan in April 1985 was an important chapter in a new era of Ismaili presence in Europe.[44] Several months later in August, another Ismaili Centre was opened in Vancouver’s Burnaby district (Canada) by Prime Minister Brian Mulroney (b. 1939; r. 1984-1993).[45] Each architecturally unique, these purpose built centres constructed by internationally reputed architects occupy prominent places in their respective cities and include, in addition to the central prayer hall, spaces to facilitate intellectual and social gatherings, meeting rooms, educational facilities, libraries, gardens and water features. The buildings were not only meant to act as symbolic markers of the Ismaili community’s presence in England and Canada, but also as an ambassadorial bridge which would continue to help them develop and maintain relationships with other faith groups and civil society organizations. In 1998, the third such Ismaili Centre was opened in Lisbon, Portugal.[46] The Centre draws inspiration from regional influences of the Moorish architectural heritage such as the Alhambra in Granada as well as that of other Muslim cultural forms such as that of Fatehpur Sikri in India.[47] In particular, the interplay and combination of outdoor and indoor spaces gave the building a different aesthetic and feel from the other Ismaili Centres that had been designed two decades earlier, further demonstrating how time and space influence contemporary Ismaili religious architecture.[48]

The first Ismaili Centre in the Middle East was opened in Dubai, United Arab Emirates on March 26, 2008 by the Aga Khan in the presence of senior members of the ruling family of Dubai.[49] The Centre, built on land donated by the Shaykh Mohammed b. Rashid al-Maktoum, Dubai’s ruler in 1982, is the first such Centre in the Middle East and reflects the centuries of Ismaili presence within the region. The building draws its inspiration from Cairo’s Fatimid architectural heritage, a dynasty founded by the Aga Khan’s forefathers and previous Imams of the Ismaili community in the 10th century.[50]

An Ismaili Centre in Dushanbe, Tajikistan, firmly located in the Persian-speaking Muslim world, reflects and marks the centuries of Ismaili presence in Central Asia and surrounding regions.[51] Opened on October 12, 2009 by Republic’s President, Emamoli Rahmon and the Aga Khan, its architecture blends a diverse range of artisanal and craft traditions of the region and draws upon as inspiration of the grand courtyards of Samarkand and Khiva in Uzbekistan as well as the 10th century Samanid mausoleum. Technical innovations include earthquake resistant roofing which transfers structural stress, a heating and air conditioning system based on water source heat pumps and a heat recovery wheel for energy efficiency.[52]

Further Ismaili Centres, in various stages of development – will follow shortly. The first of these, and the second such centre to be built in Canada, will be located in Toronto’s Don Mills area and follows the pattern of earlier buildings, representing functionally and symbolically the presence of Ismaili communities in Europe and North America. The Ismaili Centre in Toronto will be the largest such centre in the English-speaking world.[53] Centres in Houston, Texas and Los Angeles, California are also being planned.