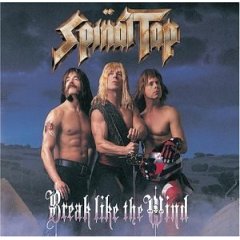 "Break Like the Wind" is an by the semi-fictional band . The title track refers to a for . Released in 1992 by , it served as a follow up to the only other Spinal Tap album, the soundtrack to the film "".

The songs depict the range of genres that Spinal Tap endured, from the anthem "Bitch School" down to the satire of "All the Way Home".

In the film, (portrayed by ) and (portrayed by ) claim "All the Way Home" is the first song they wrote together. Six years after it was written, David and Nigel recorded the song 14 December 1961. At this point the two were in different bands, David being in the 'Creatures' and Nigel with the 'Lovely Lads'.