The rolling stock of the Chicago 'L' rapid transit system consists of 1,190 rail cars (all permanently coupled into 595 married pairs) dating from 1969 to 1994, delivered in four series: the 2200-series, 2400-series, 2600-series, and 3200-series, also known as the High Performance Family, because of innovative design and technological features from previous equipment in Chicago transit beginning with the former 2000-Series cars which operated between 1964 and 1993. 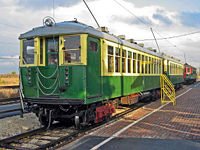 A pair of 4000-series "Plushie" cars at the Illinois Railway Museum.

The 4000 series cars were manufactured by the Cincinnati Car Company, between 1914, and 1924. They were the first steel cars on the Chicago 'L' system. These cars were built in 2 distinct variants, with the earlier, metal-roofed cars being known as "Baldies" (due to their smooth iron roofs), and the later, wooden-roofed cars being known as "Plushies" (due to their more comfortable, green plush seats). The "Baldies" were equipped with 6 doors per car, however the center doors were never used regularly. The "Plushies" were equipped with only the end vestibule doors, but the cars internal structure was arranged to allow for the later addition of the center doors.

These cars were built as the result of several distinct purchases (dates are the date of the order, not the actual production date):

The 445 cars of the 4000 series were the last Chicago 'L' cars purchased with air brakes.

When the State Street Subway opened in 1943, the older, wooden cars were not allowed to operate through it for safety reasons. The only cars available to operate in the subway were the 4000 series, which eventually led to production of the 5000 and 6000 series cars.[1]

The 5000-series cars (numbered 5001-5004) were manufactured by the Pullman Car Company and the St. Louis Car Company. They arrived on CTA property in 1947. Only these four cars were ever built. These cars were the first 'L' cars to feature the "blinker door" configuration, in which the doors to the train open inward into the car rather than slide horizontally. This door configuration was then used on the 6000-series, 1-50 series, 2000-series and the 2200-series.

The technology for these cars was based on the Presidents Conference Committee streetcar but also borrowed design elements from the North Shore Line's Electroliners. The 5000-series was distinct in that each car was a three-piece articulated unit, the only cars on the 'L' system to ever feature articulation. They were also the first series of 'L' cars to be wider at the windowsills than at the doorsills to permit more interior space and still provide clearance for station platforms.

They were originally assigned to service on the Garfield Route (a precursor of today's Blue Line) before eventually being refitted with pantographs and renumbered 51 thru 54 for service on the Skokie Swift where they finished out their careers. The 5000-series was retired in 1985.[2]

The 6000-series cars (numbered 6001-6722) were manufactured by the St. Louis Car Company and first delivered to the CTA in 1950. 130 were ordered originally with the series eventually totaling 720.

The 6000-series saw service on all of the CTA's routes except the Skokie Swift. Use on Lake/Dan Ryan was however limited to emergencies and during car shortages in late 1969 and during the winter of 1979-80. The last of the 6000-series cars were retired in 1992.[3] 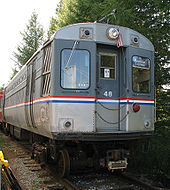 The 1-50 series cars (numbered 1-50) were manufactured by the St. Louis Car Company and delivered to the CTA in 1959 and 1960. The cars were similar to the 6000 series design, but were double ended, single cars, as opposed to the 6000 series single ended, married pair configuration. The quarter point doors were adjacent to the operators cabs, allowing the operator to collect fares without leaving the cab. Like some members of the 6000 series, these cars utilized parts salvaged from Chicago's recently retired fleet of PCC streetcars.

Cars 1-4 were equipped for high performance test service, with higher horsepower motors, and were delivered in a distinctive maroon and silver gray paint scheme.

Originally assigned to the West-Northwest service, in later years these cars were found mainly on the Ravenswood, Skokie, and Evanston lines.

10 of these cars were converted in 5 married-pair sets, and renumbered 61a-b to 65a-b, and were utilized in Skokie service.

The last cars of the 1-50 series were retired in 1999. Seven cars of this series have been preserved by various railway museums.[4] 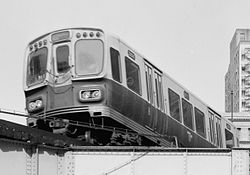 The 2000 series cars (numbered 2001-2180) were manufactured by the Pullman Car Company and delivered to the CTA starting in 1964. Like the 6000 series before them, the 2000 series were built as married-pair sets. The cars had a number of modern features, including air conditioning, fluorescent lighting, large picture windows, and sculptured fiberglass front ends for the car bodies. The car bodies were mainly aluminum. These cars were the start of the High Performance Family.

The 2000 series more modern control systems initially prevented them from being used in a train with other types, until the delivery of the 2200 series and later cars.

The 2000 series had a fairly short service life of only 29 years, with all examples being retired by the beginning of 1994. Two cars are preserved at the Illinois Railway Museum and two more remain on CTA property stored at Skokie Shops. The rest were scrapped.[5] 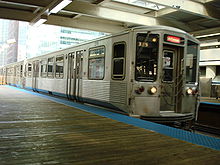 The 2200-series cars (numbered 2201-2352) were manufactured by the Budd Company of Philadelphia, Pennsylvania and first delivered to the CTA in 1969 when the Dan Ryan branch (now known as the south end of the Red Line) was opened. 150 cars were ordered, and all delivered between 1969 and 1970. These cars, the oldest still in revenue service on the 'L', are the only CTA cars still to feature the "blinker door" configuration, in which the doors to the train open inward into the car rather than slide horizontally. These doors, which have a much narrower opening than the newer sliding doors, are unable to accommodate a wheelchair. Because of this, all 2200-series trains in the system must be coupled with another married pair of a different series car, usually the 2600-series, in order to comply with the Americans with Disabilities Act of 1990. In addition, during times when consists of more than four cars are operated, the 2200-series cars are relegated to "belly car" service (which means that they are not at either end of the consist).

The 2200-series also features fluted, unpainted stainless steel sides, a unique feature in the rolling stock until the addition of the 3200-series.

They were rehabbed by the New York Rail Car Corporation of Brooklyn, New York, between 1990 and 1992.

The 2200-series currently operates only on the Blue Line. The CTA plans to replace all of these cars with the new 5000-series cars starting in 2010.[6] However, as of June 2011, all 136 of the surviving cars remain in regular service. 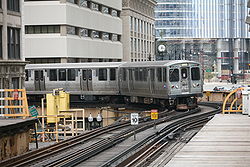 The 2400-series cars (numbered 2401-2600) were manufactured by Boeing-Vertol of Philadelphia, Pennsylvania and first delivered to the CTA in 1976 100 were ordered originally, with an option for an additional 100 (which was exercised, and the additional cars delivered through 1978). Currently, the cars are reaching the end of their expected service lifetimes and are to be replaced with the new 5000-series cars starting in 2010.[6] However, as of June 2011, most of the 191 surviving cars remain in regular service.

The first cars for the 'L' in many decades to feature sliding rather than "blinker" doors, the 2400-series also features smooth steel exteriors, ideal for decals and, in many cases, advertisements. As delivered, the cars featured a red, white, and blue color scheme on the front and rear of the cars, as well as stripes along the sides. These were modified several times over the years and the color has been removed from most cars at present, leaving them unpainted to match the bare stainless steel scheme of the rest of the fleet. Some cars feature advertising and cars 2401–2422 are "work" cars which are identified by red and white striping along their sides as well as on the front and rear of the cars. (Cars 2423-2424 were converted to "work" cars some time after 2401-2422 had been converted.)

A 2600 series car brings up the rear of a Red Line train (temporarily rerouted through the elevated tracks of the Chicago Loop) at Randolph/Wabash.

The 2600-series cars (numbered 2601-3200) were manufactured by the Budd Company, the same company that made the 2200-series, and first delivered to the CTA in 1981 in time for the upcoming O'Hare Airport extension of the Kennedy Line (now known as the northwestern end of the Blue Line). Originally, an order was made for 300 cars, but eventually this was doubled to 600, all of which were delivered between 1981 and 1987. They were the final cars ever constructed by Budd, later renamed to TransitAmerica. With 594 active cars, the series is by far the most abundant in the 'L' rolling stock. They were rehabbed by Alstom of Hornell, New York, between 1999 and 2002. They have few features to differentiate them from the earlier 2400-series, but nevertheless remain a mainstay of the 'L'.

These cars make up the entire Red, Pink and Yellow Line fleets and are also found on the Blue and Purple Lines. 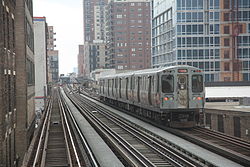 A 4-car train of 3200 series cars on the Orange Line, south of the Roosevelt elevated station.

The 3200-series cars (numbered 3201-3457) were manufactured by Morrison-Knudsen of Hornell, New York, and first delivered to the CTA in 1992. The original order for 256 was motivated primarily by the impending opening of the Orange Line, which would need new cars when it opened in October 1993.[6] The order was completed in 1994.[7]

The 3200-series contains many innovations over the previous 2600-series. Computers control much of the cab functions and simplify operation for the motorman. Diagnostics are also easier to perform on this series than on previous series. In addition, fluted steel siding is included on these cars for the first time since the 2200-series, in order to reduce graffiti. The series also introduced openable hopper windows for use in case of air conditioner failure.[7]

The 3200-series cars are currently assigned to the Orange and Brown Lines, composing their entire fleets. At various points during their service life a small number were also assigned to the Yellow and Purple Lines. 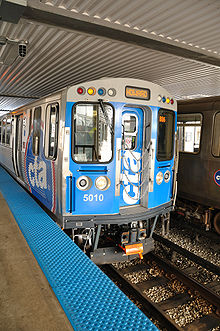 Originally assumed to be the 3500-series, the procurement of these cars experienced several delays, including a cancellation of the original bid announcement in 2002.[16]