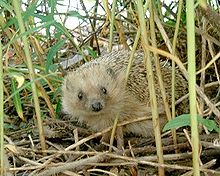 The order Insectivora (from Latin insectum "insect" and vorare "to eat") is a now-abandoned biological grouping within the class of mammals. Some species have now been moved out leaving the remaining ones in order Eulipotyphla, within the larger clade Laurasiatheria, which makes up one of the most basic clades of placental mammals.

In the past, the grouping was used as a scrapbasket for a variety of small to very small, relatively unspecialised, insectivorous mammals. Since any primitive-looking fossil groups of placental mammals were commonly assigned to this order for convenience, it was held to constitute the basal stock out of which other placental orders had evolved. Therefore, at its widest extent, the order Insectivora represented an evolutionary grade rather than a clade.

The taxonomy has been refined in recent years, and treeshrews, elephant shrews, and colugos have now been placed in separate orders, as have many fossil groups that were formerly included here. For some time it was held that the remaining insectivoran families constituted a monophyletic grouping, or clade, to which the name Lipotyphla had long been applied. However, molecular evidence indicated that Chrysochloridae (golden moles) and Tenrecidae (tenrecs) also should be separated as a new order Afrosoricida.

Erinaceidae (hedgehogs) was then also split off into a separate order (Erinaceomorpha) from the remainder (termed Soricomorpha), comprising the families Soricidae (shrews), Talpidae (moles), Solenodontidae and Nesophontidae.[1] These two orders then replaced Insectivora. This scheme was undermined when molecular studies indicated that Soricomorpha is paraphyletic, because Soricidae shared a more recent common ancestor with Erinaceidae than with other soricomorphs.[2]

However, the combination of Soricidae and Erinaceidae, referred to as order Eulipotyphla, has been shown to be monophyletic.[3]

These families have been placed within Insectivora in the past:

Not to be confused with insectivores (the eaters of insects considered as a feeding behavior), many of which do not belong to Eulipotyphla or the other taxa formerly included within Insectivora.