Congressional Gold Medal
Not to be confused with Medal of Honor.

A Congressional Gold Medal is an award bestowed by the United States Congress and is, along with the Presidential Medal of Freedom, the highest civilian award in the United States. The decoration is awarded to an individual who performs an outstanding deed or act of service to the security, prosperity, and national interest of the United States. American citizenship is not a requirement.

A Congressional Gold Medal awarded to the Navajo code talkers, 2000 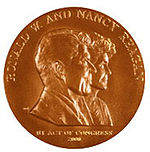 Since the American Revolution, Congress has commissioned gold medals as its highest expression of national appreciation for distinguished achievements and contributions. Each medal honors a particular individual, institution, or event. Although the first recipients included citizens who participated in the American Revolution, the War of 1812 and the Mexican-American War, Congress broadened the scope of the medal to include actors, authors, entertainers, musicians, pioneers in aeronautics and space, explorers, lifesavers, notables in science and medicine, athletes, humanitarians, public servants, and foreign recipients.[1] The medal was first awarded in 1776 by the Second Continental Congress to then-General George Washington and John Paul Jones during the American Revolutionary War.[2]

The Gold Medal and the Presidential Medal of Freedom are generally considered to carry the same level of prestige (though significantly fewer Gold Medals have been awarded). The chief difference between the two is that the Freedom Medal is personally awarded by the President of the United States (executive branch), and Congressional Gold Medals are awarded by acts of the Congress (both houses).

Per committee rules, legislation bestowing a Congressional Gold Medal upon a recipient must be co-sponsored by two-thirds of the membership of both the House of Representatives and the Senate before their respective committees will consider it.

Congressional Gold Medal authorized by the Congress on May 4, 1928, and awarded to Col. Charles A. Lindbergh on August 15, 1930.