Order of the Dragon of Annam

Order of the Dragon of Annam 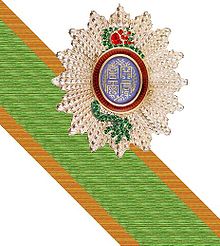 Order of the Dragon of Annam, class "Grand officier".

The Imperial Order of the Dragon of Annam was created on March 14, 1886, in the ancient Vietnamese city of Huế, by Emperor Đồng Khánh of the Imperial House of Annam, upon the "recommendation" of the President of France as a jointly awarded French colonial order. During this period (particularly during the era of Đồng Khánh), Vietnam was ruled by the French.

The Order was originally created to reward and acknowledge those outstanding individuals who had performed both military and non-military services to the Nguyễn Dynasty.

Throughout its entire history, the Order was also bestowed by the French Colonial Government. However, the Order always was, and to this day remains the real, personal and dynastic property of the Imperial House. When French colonial rule over Indochina ended, the Order of the Dragon of Annam was abolished and replaced by the National Order of Vietnam which was later retained and revised by the Republic of Vietnam (South Vietnam). The ribbon of the Dragon of Annam was retained for this award, but it was (belatedly) recognized that a colonial order had no place in the new regime as the order was always historically associated with the period of French rule. Even the name of "Annam" in the title of the order was a point of dishonor as the name comes from the old Chinese term for Vietnam, which means "the peaceful south".

Prince Bảo Vang of Vietnam, son of Emperor Duy Tân, was appointed by the late Crown Prince Bảo Long to serve as the Grand Master of the Order [1] in 2005, and currently serves under the authority of Prince Bảo Thắng of Vietnam, the Crown Prince's brother and successor as Head of the Imperial Nguyễn Dynasty. The focus of the order is on humanitarian, educational, and cultural endeavours of the people of Vietnam. Additionally, Prince Bảo Vang serves on the Executive Committee of the "Hội Ðồng Hoàng Tộc Nguyễn Phước Hải Ngoại", or Vietnamese Imperial Family Overseas Council.

The Chancellor of the Order is Prince Nguyen-Phuoc Quy Jean-Luc.

In its classes and insignia, the Order is obviously modelled on the French Légion d'honneur. The Emperor (currently Head of the Nguyễn Dynasty) as Grand Master of the Order is the only one allowed to wear both the Grand Cross and the Knight's badge in tandem. The five classes of the Order are:

Goal of the Order

The Order will henceforth focus on humanitarian, educational, and cultural endeavors rather than political goals. The Imperial Family wishes to remain out of the political fray and expects that Order will focus on efforts to aid the poor and disenfranchised people in Vietnam as well as outside the country, with particular emphasis given to children, the elderly, and the disabled. [2]

On 17 December 2004, the late Crown Prince Bảo Long, Head of the Imperial Nguyễn Dynasty, issued a statement saying that this person was unknown to him.

See World Orders of Knighthood and Merit published by Burke's Peerage and Gentry (2006) for full details.