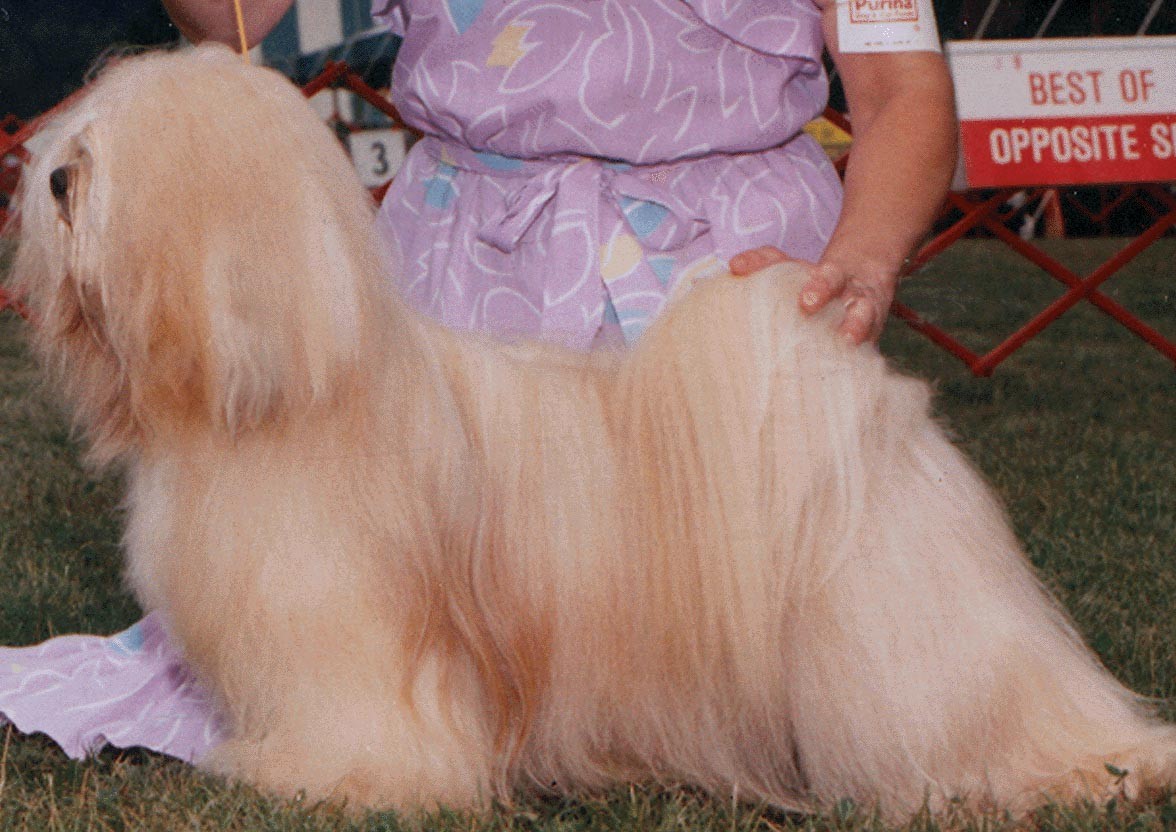 The Lhasa Apso (lha-saw op-so) is a non-sporting breed originating in . It was bred originally to guard monasteries by alerting monks to any intruders who entered. [ [http://www.trainpetdog.com/Lhasa-Apso/about-lhasa-apso.html Lhasa Apso: Origin, Temperament, Training, Exercise] ]

Lhasas Apsos should ideally be 10 inches at the and weigh about 14-18 pounds (between 6kg and 8kg). The females are slightly smaller, and weigh between 12-14 pounds (between 5kg and 7kg). The breed standard requires dark brown eyes and a black nose, although liver coloured lhasas have a brown nose which makes them unsuitable for the show ring but still make great pets. Texture of the coat is heavy, straight, hard, neither woolly nor silky, and very dense. A Lhasa's coat should be of good length if it is for the show ring but a lot of people who keep lhasas as pets getting it trimmed into the teddy bear cut by a groomer. All colors are equally acceptable for the show ring as long as they have a black nose. Lhasas can be with or without dark tips to ears and beard although it is traditional for them to have it. The tail should be carried well over the dogs back. The breed standard currently used by the American Kennel Club was approved , . [http://www.akc.org/breeds/lhasa_apso/index.cfm] Lhasas can change colour as they get older. Some start off with a dark brown coat with tan and white splotches, but when their hair is cut or it grows naturally, their colour can turn much lighter.

Having been bred to be sentinel or watch dogs, Lhasa Apsos tend to be alert and have a keen sense of hearing with a rich, sonorous bark that belies their size (some are known as "singers").Fact|date=June 2007

Lhasa Apsos, although small, can exhibit brief periods of explosive energy.Fact|date=June 2007 Unique personality characteristics of Lhasa Apsos have gained them a reputation in some circles as being a very emotive breed that in some cases prove themselves to be completely fearless.

If properly raised it will come to appreciate bathing, hair combing and cutting. The Lhasa Apso is a long-lived breed, with some living in good health into their early 20s.Fact|date=June 2007

The heavy coat of Lhasas can also be explained by the geographical features of Tibet: the temperature frequently drops below freezing thus making it hard for a dog to survive without sufficient insulation. Lhasas were rarely groomed by their owners thus allowing the breed to adapt to the harsh weather, although when they are in warm climates, such as the south-western U.S., many owners prefer to have the coats trimmed.Fact|date=June 2007

In 1901 Mrs. A. McLaren Morrison brought the Lhasa Apso to the UK where it was registered as an official breed in in 1902.Fact|date=June 2007

The original American pair was a gift from to C. Suydam Cutting, arriving in the in the early 1930s. The officially accepted the breed in 1935 in the Terrier group, and in 1959 transferred the breed to the Non-Sporting group. [American Kennel Club: [http://www.akc.org/breeds/lhasa_apso/history.cfm "Lhasa Apso History"] ]

Recently, DNA Analysis has identified the Lhasa Apso as one of the 14 most . ["Science": [http://www.sciencemag.org/cgi/search?src=hw&site_rea=sci&fulltext=ancient+dog+breeds Search query on article] ] The breed has incredibly good hearing and this is why they were used in Tibet as ears for the old Tibeten monks who were hard of hearing so that the monks could be alerted by the dogs sharp high pitched bark if there were any intruders.

At the Argentina in 2005 a Lhasa Apso, Homero del Alcazar, became "World Champion" (Best in Show.)

* The Brazilian comic series features a Lhasa Apso named Fluffy which belongs to .
* In the animated series , Peter's Aunt May owns a lhasa apso named Ms. Lion.
* of is based on this dog breed
* Known to suffer from Sebaceous Adenitis - Sebaceous Adenitis is a hereditary skin disease that occurs primarily in Standard Poodles, but has also been reported in a number of other breeds, including the Lhasa Apso.
* Suffer from the genetic disease Progressive Retinal Atrophy which can leave lhasas completely blind.